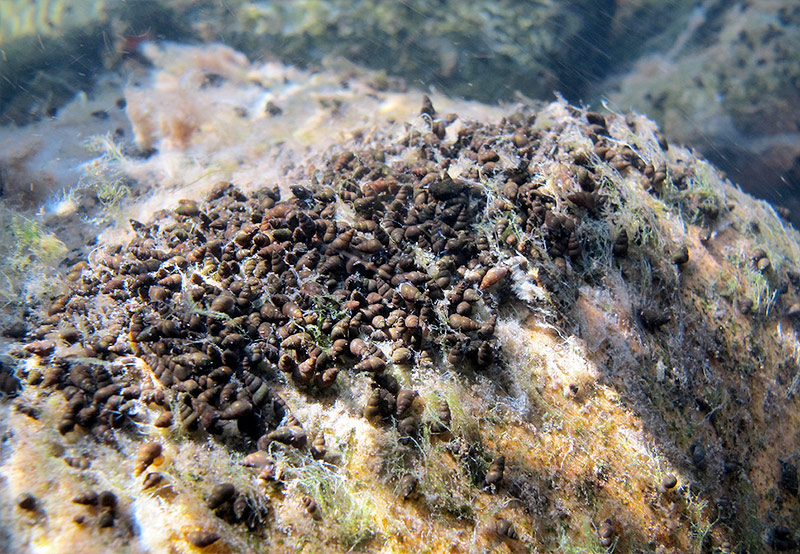 As sport-fishing enthusiasts travel far and wide for their chance to catch the Chinook salmon returning to our North Coast and Central Valley rivers – this increases the risk of accidentally aiding the spread of aquatic hitchhikers. Transported from one body of water to another on fishing gear (such as waders) or boating equipment, invasive species can quickly become established and have profound effects on native animal and plant communities.

Among the most rapidly spreading of the roughly 50,000 non-native species in the United States (as of 2004, Schisler et al. 2004) is, one of the 66 currently recognized invasive mollusks, the New Zealand mudsnail, Potamopyrgus antipodarum. Often smaller than a peppercorn, they can survive out of the water for weeks, and a single individual of these asexually reproducing snails can be enough to colonize new habitats. In their native range, their numbers are limited by a parasitic nematode worm, which can keep the population in balance. In absence of this natural enemy, mudsnails can reach astonishing densities that often exceed 300,000 individuals to per square meter (Richards et al. 2001), displacing native fauna (Kearns et al. 2005). 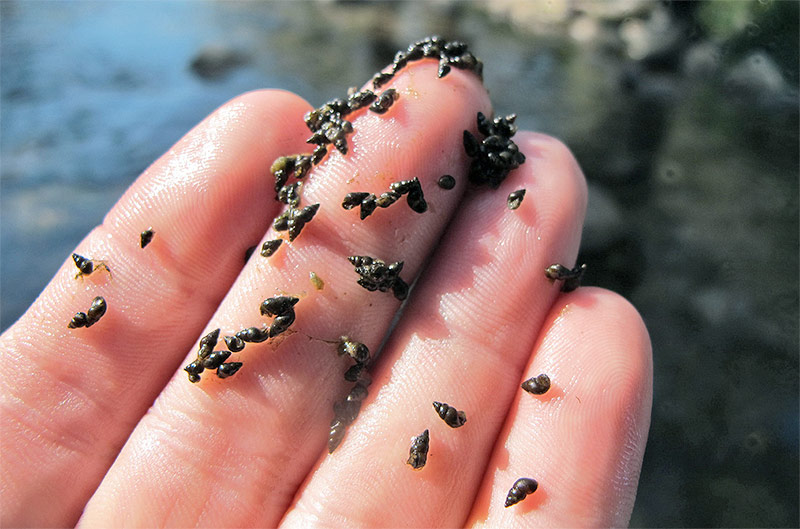 Mudsnails themselves are a poor source of food, and native fishes that have ingested mudsnails are often unable to obtain sufficient nutrition to maintain their weight (Vinson and Baker 2008). This comes as no surprise, as mudsnails frequently survive passage through the digestive tract of fishes and other animals (see Alonso and Castro-Díez 2008 for a review). Being such a poor source of nutrition, most native fishes do not selectively prey upon these snails – in fact, to date, only one native fish species, the endangered tidewater goby, Eucyclogobius newberryi, has been reported to prey upon and digest New Zealand mudsnails (Hellmair et al. 2011).

To eliminate the chance of spreading mudsnails (and other species), FISHBIO uses commercial disinfectant on our gear and boats, and we freeze our waders for at least one night before using them on a different reach of river. Though most recreational fishermen don’t have a freezer chest for storing their gear, there are some measures that easily be taken using readily available household cleaners. For example, a 10 minute exposure to undiluted 409 has been shown to effectively kill New Zealand mudsnails and other invasive species (Schisler et al. 2008), additional information on how to prevent spread of mudsnails can be found here. Also, there is a movement to ban the sponge-like felt-soled boots from use, since they can harbor these mudsnails. So as you go chase some fish, please be responsible and treat your gear against invaders.