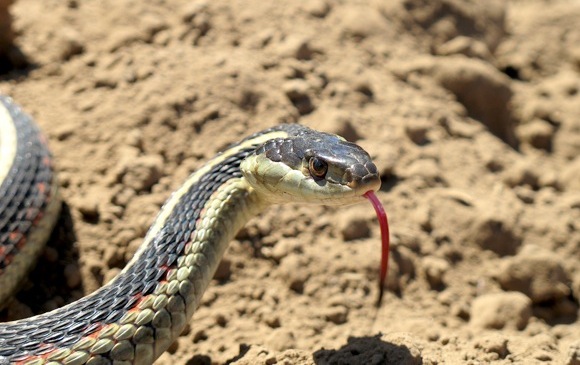 Spending as much time in the field as we do monitoring fish, we often encounter a variety of reptiles, insects, birds and mammals. Most of the time we quickly recognize what we see and are able to take steps to not impact the animal or its habitat. But one day was a little different: while monitoring a project to improve salmon and steelhead passage, we came across what we first thought to be a giant garter snake (Thamnophis gigas). However, when we looked a little closer at the snake, it moved and displayed red lateral markings along its body. These markings do not occur on the giant garter snake, but do occur on its close relative, the common garter snake (Thamnophis sirtalis).

Endemic to California’s Central Valley, the once abundant giant garter snake is one of the largest native snakes in North America and can grow more than 5 feet in length. Historically making its home in the vast natural wetland habitats of the Valley, the giant garter has become heavily reliant on rice fields and managed marsh areas to survive. The giant garter has a background coloration from olive to brown and displays three yellowish stripes, which distinguish it from many other snakes in California. The federal government lists the giant garter snake as a threatened species, and the U.S. Fish and Wildlife Service oversees its conservation efforts and offers online education.