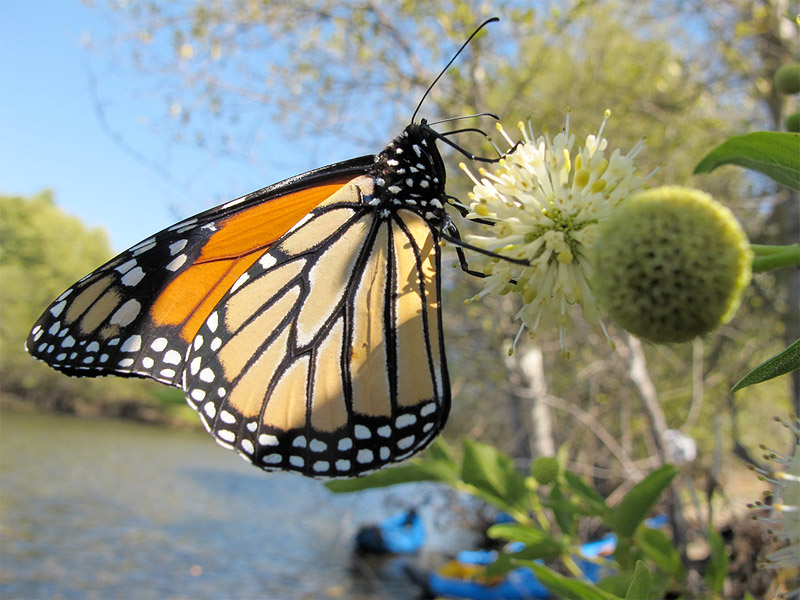 Monarch butterflies are more than just a beautiful sight. These impressive insects embark on a massive migratory journey from northern America to the middle of Mexico and back again, a trek that can reach up to 2,800 miles each way. For a butterfly weighing less than half a gram, and with a wingspan between 3.7 and 4.1 inches, this is a gigantic journey. Because these invertebrates generally only live for a few weeks, the full migration may take up to five generations of butterflies to make it back up north. Despite never having embarked on this expedition before, monarchs somehow know where and when to go – all part of an amazing natural phenomenon that is awe-inspiring to witness. Their migratory path often takes these butterflies to California along the way, and they can be spotted in multiple locations, such as a eucalyptus grove at Natural Bridges State Park in Santa Cruz.

Monarchs are a classic example of a multiple-stage life history. Adult butterflies lay their eggs on milkweed, which young caterpillars will feed on until they form a cocoon. Milkweed is toxic for many animals but not for monarchs, which have evolved immunity. Feeding on milkweed allows monarchs to store up the toxins in their bodies, as their bright colors indicate – an adaptation that makes them taste horrible to other animals and keeps them from being preyed upon. However, their diet changes when they become adults. After hatching into physically mature monarch butterflies, they ditch the milkweed and feed on nectar from flowers.

Unfortunately, scientists estimate that up to 90% of the monarch population has disappeared since the 1990s due to habitat loss. Climate change is also an issue for these insects, as their migration route spans continents, and new temperatures and conditions may create inhospitable environments along the way. While not evaluated by the IUCN, their status is regarded as decreasing. In order to protect these charming critters from further loss, we must first protect the ecosystems and landscapes that they need to survive and thrive. By preserving and dedicating habitat for monarchs, including the plants they need, they have a better chance of fighting the odds set against them.