While “probing the waters” near our Chico office in our spare time, we recently came across some salmonid species that, despite being mostly absent from the salmon-centric news headlines, have historically played a major role in fisheries management in the Golden State. California is home to an astonishing variety of native trout, such as the picturesque California golden trout (Oncorhynchus mykiss aguabonita), our state’s official freshwater fish, or the famed Eagle Lake trout (O. m. aquilarum), the only strain of rainbow trout able to thrive in alkaline, warm waters.  Despite being the putative source of the rainbow trout strains that have become one of the most widely introduced and cultured species worldwide, California also has a long history of introducing salmonids from other parts of the globe to its own waters. Brown trout (Salmo trutta) and brook trout (Salvelinus fontinalis) are perhaps the most commonly stocked exotic salmonids in streams and lakes throughout the state.

Brown trout, a native of Europe, North Africa and Western Asia, were introduced to enhance recreational opportunity as far as the late 19th century. Successfully competing with native species and occasionally growing to large size, brown trout have become a prized piscatorial target across the U.S. and most temperate regions around the world. 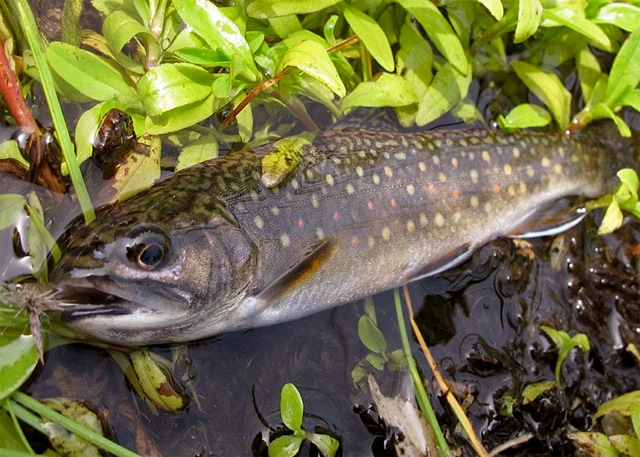 Similarly, brook trout were introduced from the other side of the continental divide beginning in the late 1800s. Their ability to survive and reproduce in spring fed lakes rather than in streams (like most other salmonids) has contributed greatly to their popularity, and led to the establishment of brook trout populations in many alpine lakes and streams, including many habitats previously devoid of fish.

In recent decades, stocking of these species has been discontinued in many places due to the negative impacts of these introductions (e.g. Kruger and May 1991). However, introduced populations of brown and brook trout continued to sustain themselves and, as a result, all major watersheds in the Sierra Nevada currently contain at least one (and sometimes several) species of introduced salmonid in addition to native rainbow trout (Knapp 1996). The scientific literature is rich with examples of interspecific competition (see Hearn 1987 for a review) and competitive exclusion between these species (e.g. Scott and Irvine 2000), which are factors often thought to explain their latitudinal segregation. Brook trout are often the most abundant fish near the headwaters of small streams, rainbows dominate the middle sections and the highest abundance of brown trout is found in the lower reaches (e.g. Weigel and Sorensen 2001).

Despite the potential for competition, there are places where these three species co-occur in the same reach of stream. One such locale is a meadow not far from our Chico location, where the trio pictured above was caught and released in the cool, clear headwaters of Deer Creek.