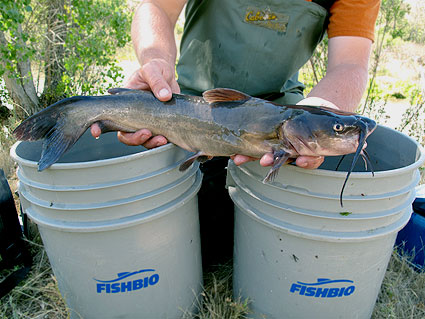 White Catfish (Ameiurus catus), indigenous to the East Coast, were first planted in 1871 into the San Joaquin River at Stockton, by the California Fish Commission to provide recreation and food. As often occurs when non-native fish are introduced, the population exploded and a commercial fishery initiated. Annual commercial catch in the Delta exceeded 1 million lbs by the early 1900s and continued until 1941 when restrictions were initiated to protect recreational fishing.

A recent 7-year study (Feyrer and Healey 2003) demonstrated that white catfish are the 3rd most abundant fish species in the south Delta, behind bluegill and redear sunfish. According to creel surveys conducted by the Department of Fish and Game, catfish are the second most targeted species in the San Joaquin River with over 50,000 caught annually. Striped bass are the most targeted fish species.