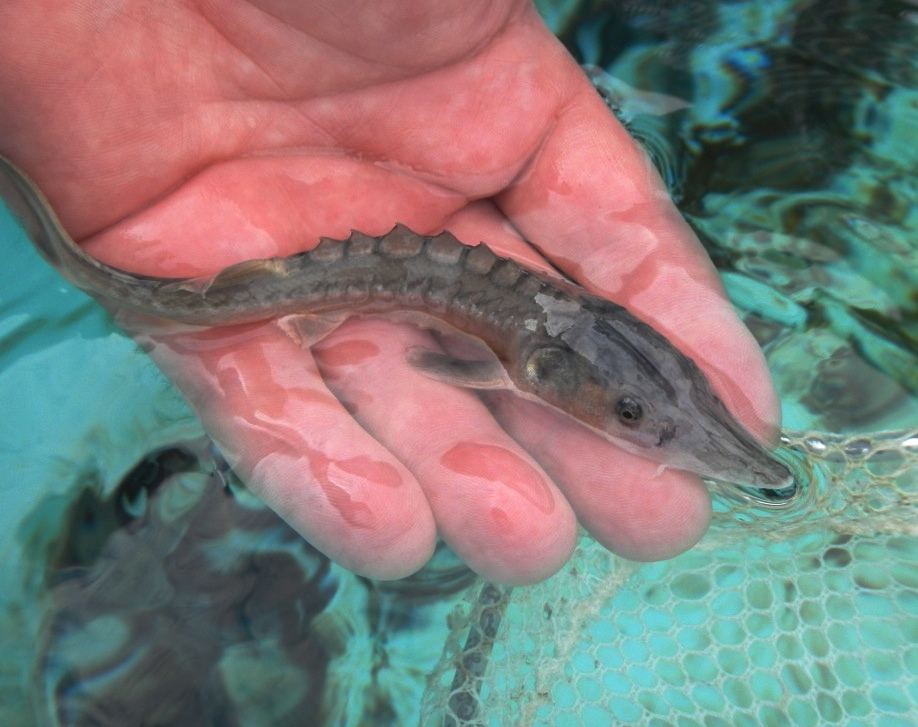 Living in the Sacramento River can be a risky business for juvenile green sturgeon (Acipenser medirostris). The young fish must swim through a gantlet of water diversion pipes sticking into the river like so many straws, sucking up irrigation water – as well as unlucky fish. Once pulled into the pipes, a process known as entrainment, fish are either killed when they collide with water pumps, or get stranded once dumped into canals, ditches or farm fields. Essentially, all entrained fish are lost from a population, which can deal a blow to an already threatened species like the long-lived, slow-maturing green sturgeon that spawn in the Sacramento River.

Scientists assume that juvenile Sacramento River green sturgeon are particularly vulnerable to entrainment because they migrate downstream past the diversion pipes between May and August, which falls during the peak period of water diversion in April to September – however, there haven’t been numbers to quantify this susceptibility, until now. In a paper recently published in the journal PLOS One, scientists from the University of California Davis experimentally calculated the risk of green sturgeon entrainment – and discovered that diversions pose a surprisingly high threat to the species. At high water diversion rates, as many as half of the population’s juvenile green sturgeon could be entrained if they pass within 1.5 m of a diversion pipe more than three times, the scientists found.

For their experiments, the scientists worked with 60 juvenile green sturgeon ranging in age from 26-36 weeks, with a mean fork length of 34.9 cm. The team set up a large laboratory flume to simulate different Sacramento River flow speeds, and in it placed an unscreened diversion pipe nearly half a meter in diameter. They angled the pipe to simulate an irrigation diversion that passes over a levee, and used video cameras to record fish behavior during the experiments. The researchers noted whether sturgeon successfully swam past the pipes, or whether they were swept inside (as shown is this video), at different water velocities and diversion rates.

The authors discovered the sturgeon face a relatively high risk of entrainment, suggesting that diversion pipes could be siphoning off a large portion of their population – a process that is not currently monitored in the field. The percentage of sturgeon entrained ranged from 26-61%, and was greatest at low simulated river velocities and high rates of water diversion. Generally, sturgeon did not actively avoid the pipes. The scientists suspect this is because, compared to other species, green sturgeon have fewer sensory organs to detect changes in water flow speed and direction, which would alert them to the presence of a diversion pipe. The risk of entrainment for green sturgeon (4.2-22.3%) was much higher than that for juvenile Chinook salmon (0.3-2.3%) recorded in a previous study by the authors (Mussen et al. 2013).

Slowing down the rate of water diversion can substantially lower the extent of sturgeon entrainment, the scientists found: a decrease in diversions from 0.57 m3/s to 0.28 m3/s cuts the number of fish entrained by 78%. However, this would not completely remove the risk. Juvenile sturgeon may stay in freshwater for up to 1.5 years before migrating the ocean, and during this time are continually at risk of encountering and becoming caught in diversion pipes. Diversion pipes are often placed near river bottoms, making it even more likely for bottom-dwelling sturgeon to encounter them. And almost all (98%) of the more than 3,300 water diversions in the Sacramento River are unscreened (Herren and Kawasaki 1997), thus posing potential hazards for green sturgeon. Although the authors advise caution in extrapolating their laboratory results to wild green sturgeon, their findings suggest diversion pipes are a potentially significant source of mortality for these threatened fish, and warrant the consideration of new management strategies.