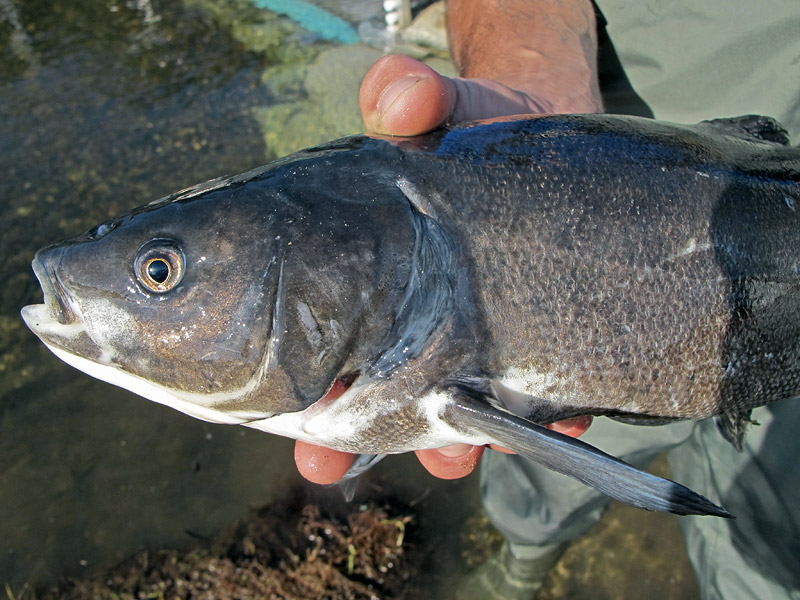 Sacramento blackfish (Orthodon microlepidotus) are cyprinids (minnows) native to the Lower Sacramento River Basin and Delta. They are well adapted to survive in warm and turbid water, commonly occupied by non-native bass and sunfish. By increasing their ventilatory stroke volume during respiration, they can move more water across their gills, allowing them to survive in hypoxic (low oxygen) environments (Cech and Massingill 1995). Like all minnows, Sacramento blackfish lack teeth on their jaws, but possess pharyngeal teeth located in their throat behind the last gill arch. They feed on planktonic algae, floating detritus and zooplankton, including rotifers, copepods, cladocerans, and diatoms.  As they pump water through their oral cavity during respiration, food bits are caught in a patch of mucus on the roof of the mouth, which is secreted by a special palatal organ. Then, the fish swallows the mucus and food together. Their ability to tolerate warm, low oxygen water and their low trophic level feeding habits have allowed Sacramento blackfish to survive in the drastically altered Sacramento-San Joaquin Delta.