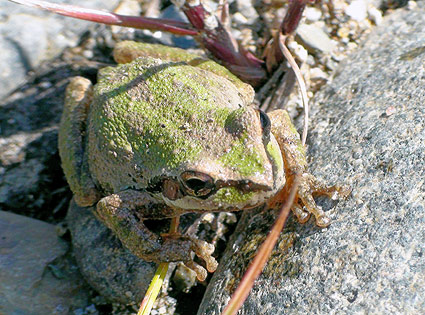 This Sierran Treefrog, Pseudacris sierra, was recently photographed in a central Sierra watershed. Only 1 to 2 inches as adults their color varies from green, tan, brown, gray, red, and cream. They can quickly change from dark to light morphs due to a change in background brightness. Also known as a chorus frog they are the most commonly heard frogs in California. They have an extensive repertoire of calls, including an advertisement call, trilled encounter call, land call, and release call.

Contrary to their name, this frog is chiefly a ground-dweller, living among shrubs and grass near water but can also be found high up trees. They are active both day and night and use their large sticky tongue to catch and eat a wide variety of invertebrates. Although they are not currently listed under the Endangered Species Act their populations are vulnerable to nonindigenous bullfrogs.