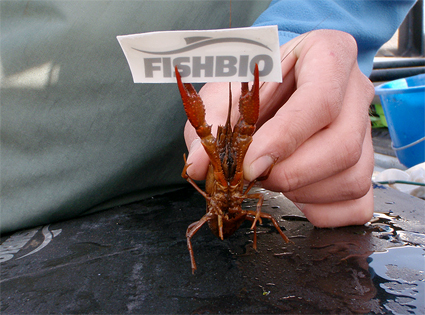 We’d like to think that given the choice this crayfish would hoist our logo without any prompting, just for the sake of internet-fame and bragging rights among other crayfish. However, we also know our staff and the things they do to stay alert on extended sampling events.

This is certainly not the first crayfish we’ve captured while conducting field research, as they are common scavengers in the Central Valley. However, this Red Swamp crayfish Procambarus clarkii is a non-native species originating from the southeastern United States, and is believed to have been introduced by anglers. Though it didn’t make the cut as our company mascot, we appreciate its enthusiasm, and what can we say, we’re suckers for FISHBIO fans.