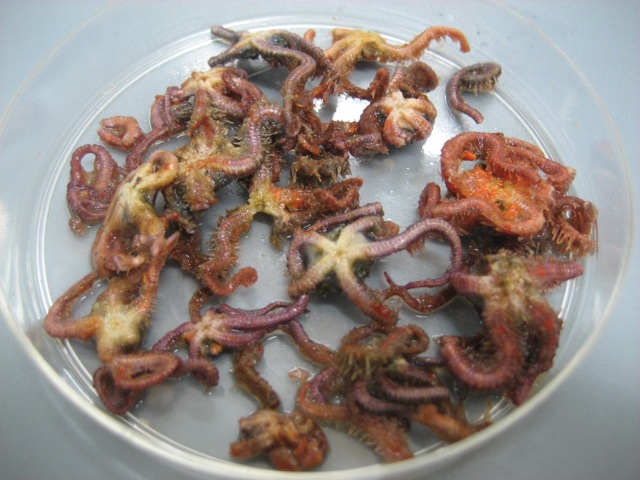 Food webs are important features of any ecosystem – but in an environment like the river or the ocean, how do you actually identify who eats who? Unlike a lion taking down prey on the grasslands of Africa, it’s much harder to watch a fish in the act of catching its meals. One of the most basic ways to figure out the relationships between fish and their prey is to actually look into a fish’s stomach to see what it’s been eating. One of our biologists did just that for her master’s thesis: she opened up the stomachs of gopher rockfish (Sebastes carnatus, see Gopher (rockfish) guts) to understand the food web inside California’s Central Coast Marine Protected Areas (MPAs). The results of her work were recently published in the journal Marine Ecology Progress Series. 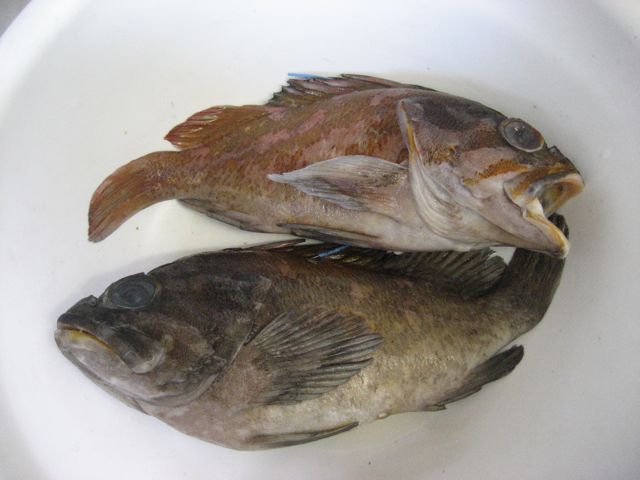 Her findings showed no major difference in diets of fish from inside and outside of four MPAs along the coast; however, what the fish were eating differed among the four locations as a whole, regardless of whether fish came from inside or outside of an MPA (Loury et al. 2015). Specifically, fish from the Año Nuevo area (the most northern of the study locations) were eating differently than fish from the more southern locations (Point Lobos, Piedras Blancas, and Point Buchon). The fish from Año Nuevo ate more crabs, such as the red rock crab, and porcelain crabs, which are known for their “fragile” tendency to drop a claw when threatened, and regrow it later. In comparison, gopher rockfish from the more southern locations ate more brittle stars, a prickly relative of starfish shown in the top photo. Further analysis revealed that the sites sampled at Año Nuevo were much shallower than the rest of the locations, so this could be one of the environmental factors contributing to the differences gopher rockfish diets.

California’s network of MPAs stretches along the entire coast, and this network has been divided into regions to monitor the effects of the MPAs over time. The results of this study indicate the prey types of gopher rockfish in Año Nuevo (and therefore possibly the composition of the invertebrate community) are quite distinct from the other locations in the Central Coast region, and such differences should be taken into account when assessing the ecology of the region as a whole. This research was part of the California Collaborative Fisheries Research Program (CCFRP), coordinated by  researchers from California Sea Grant at Moss Landing Marine Laboratories and SLOSEA/Center for Coastal Marine Sciences at Cal Poly San Luis Obispo. The program brings together recreational anglers and scientists to monitor the Central Coast MPAs (Starr et al. 2015), and this study was only possible thanks to the coordinated effort of fishermen and scientists working together. At FISHBIO, we can definitely appreciate the joys of a day of fishing, especially in the name of science.