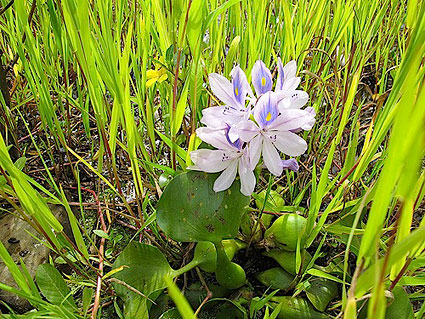 At first glance you would not suspect that the water hyacinth (Eichhornia crassipes), with its beautiful lavender and yellow flowers, is considered one of the most aggressive invasive water weeds in the world. This plant has waxy leaves that form mats on the surface of freshwater bodies such as ponds, lakes and rivers with flotation provided by spongy tissue in the leaf stems. As one of the fastest growing plant species in the world it can quickly obstruct a river (see this YouTube Video) or agricultural canal, and foul weirs and water pumps. It is native to the Amazon River basin in South America and was brought to the US in the 1800s to beautify water gardens, but almost immediately became a nuisance species. Its impressive dispersal capabilities come from its ability to establish new plants from fragments, water-borne seeds, bird-dispersed seeds and, of course, human gardeners. After hyacinth had plagued the Delta and its tributaries for a century, in 1982 the California Department of Boating and Waterways was designated as the lead agency for controlling water hyacinth and more recently Brazilian Waterweed. Despite its bad reputation, the plant has at least one redeeming quality; it is good at purifying contaminated waters and according to the California Invasive Plant Council, a 0.5 ha lagoon of hyacinth can purify the daily sewage waste of 1,000 people. Introducing the Restroom of the Distant Future. . . the crassipes ‘toilet’ (as it will be politely called). If you think we’re joking check out this NASA website, which describes the potential role of water hyacinth in waste water treatment in space.