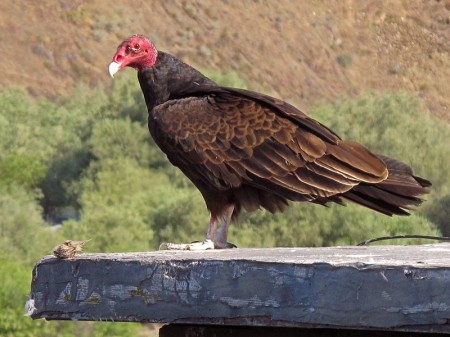 We tend not to give turkey vultures (Cathartes aura) much thought. Since they feed on carrion, particularly road kill, they have a negative association in the minds of the general public. However, turkey vultures, named for their resemblance to wild turkeys, are impressive and important creatures. This species ranges from Canada to the very southern tip of South America, with several sub-species. Unlike most other scavenger birds, turkey vultures rely on their keen sense of smell to locate their dinner (Snyder and Snyder 2006). In the 1980s David Houston, a researcher from the University of Glasgow, tested this hypothesis by hiding chicken carcasses around a tropical island in Panama. Houston (1986) found that recently killed chicken were difficult for the vultures to detect, day-old chickens were found efficiently, and rotten chickens were not consumed. . . Even a scavenger needs standards, right? Thus, turkey vultures can detect hidden carrion and consume it, before the meat is rotten. It may seem strange, but vultures are vital to the health of the ecosystem – they act as a natural clean up crew, preventing the spread of disease from infected carcasses. In Africa (CEPF 2005) and India (Markandya 2008) the recent decline in vultures has been noted as a significant concern for both ecosystem and human health.

In the Central Valley turkey vultures scavenge along rivers and play an essential role in converting salmon carcasses into a source of nitrogen for the riparian vegetation and nearby crops such as wine grapes (Merz and Moyle 2006). So, next time you sip a glass of wine, be sure to thank the California turkey vultures.