OAKDALE, Calif. – The once healthy population of rainbow trout living in the Stanislaus River declined precipitously during the California drought, according to survey results released today by the fisheries consulting firm FISHBIO. (https://fishbio.com/2015-stan-trout-survey)

The summer 2015 population estimate of about 5,000 fish in the river represents a 75 percent decline from the average population estimate of the last six years. This troubling trend comes on the heels of very warm water temperatures in 2014 that persisted into 2015. Worse is likely in store for the fish, the scientists note, because trout numbers tend to decline one year after a hot summer, and river temperatures were warmer in 2015 than in 2014. As the FISHBIO team prepares to snorkel in the Stanislaus River to conduct its annual trout count, they anticipate finding even fewer fish this year. 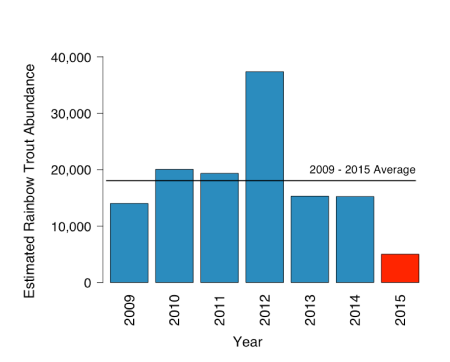 Figure 1. Annual rainbow trout abundance in the Stanislaus River during 2009-2015.

The FISHBIO and the Oakdale Irrigation District describe the current plight of the fish in a new video called “The Future of Rainbow Trout on the Stanislaus River,” available on YouTube.

Rainbow trout are the resident, river-dwelling form of the fish Oncorhynchus mykiss. This species also has a migratory form known as steelhead, and in the Central Valley this form is considered “threatened” under the federal Endangered Species Act. Steelhead often migrate from the river to the ocean at one or two years of age, meaning that all the young trout observed in the Stanislaus River downstream of Goodwin Dam have the potential to become steelhead.

With funding from the Oakdale and South San Joaquin irrigation districts as well as the Tri-Dam Project, scientists at FISHBIO have conducted snorkel surveys to count rainbow trout on the Stanislaus River every year since 2009, which allows the team to track the fish’s abundance over time and across a range of conditions.

The Stanislaus River is known to have one of the largest populations of rainbow trout in the Central Valley. Based on annual snorkeling surveys, FISHBIO estimated the yearly average abundance to be about 20,220 trout in the river between 2009 and 2014, and in that time numbers never dipped below 14,000 fish. This abundance is due in part to high-quality habitat, particularly in Goodwin Canyon east of Knights Ferry, where fast-moving water, boulders and other features offer a diversity of hiding places and food for the fish. However, in 2015 the number of trout counted per river mile dwindled in the canyon by about 80 percent.

The average daily water temperature in the Stanislaus River reached 69 degrees Fahrenheit at Knights Ferry in August 2015, which is higher than any summer water temperature recorded since 1998. These warm temperatures were related to the exceedingly low water level in New Melones Reservoir (upstream of Tulloch and Goodwin dams), which was then at 12 percent of capacity. 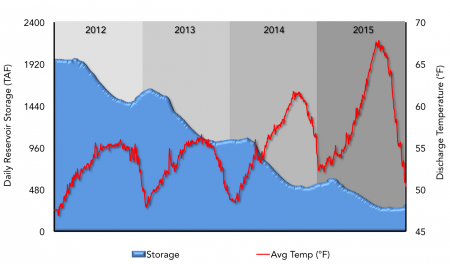 Storage in New Melones Reservoir in Thousand Acre Feet and average daily water temperatures at Goodwin Dam during the 2012-2015 drought.

Trout and salmon prefer cooler water, so to protect these fish, the reservoir should ideally be managed to maintain a reserve of deeper, cold water. However, by summer 2014, the level of the reservoir had dropped too low for the water to remain cool, so the water released from New Melones was warm during that summer and even warmer during summer 2015. This likely had serious consequences both for trout living in the river and for eggs they laid during the winter.

While the reservoir is now at nearly 24 percent capacity following a winter with decent precipitation, water temperatures in the river during 2016 have been similar to the warm conditions in 2014. FISHBIO’s upcoming trout survey will reveal the extent of the damage from consecutive warm years.

The prevailing strategy that government agencies use for river fisheries management is “more flow equals more fish,” and certain volumes of water are prescribed to flow down the Stanislaus River each year to purportedly keep the rainbow trout population healthy. However, as FISHBIO describes in its latest report, these prescribed flows have actually had little effect on rainbow trout numbers over the years. With the exception of extremely high flows that were released for flood control in 2011, water temperature has played a much bigger role than river flow in determining rainbow trout abundance—so much so that rainbow trout have declined even though flows have been relatively high in recent years, because water released from the reservoir has been too warm.

“This drought is a good reminder that sometimes saving water for later release is better for fish than releasing too much at once,” said Doug Demko, president of FISHBIO. “We now have evidence that releasing stored water in a way that depletes cold water reserves can significantly reduce rainbow trout abundance.”

Conducting snorkel surveys to tally rainbow trout every year allows scientists and managers to understand how the population is faring, and make decisions accordingly.

“We began these population surveys in 2009 after the National Marine Fisheries Service mandated higher flows to protect rainbow trout, without even knowing how many fish there were in the river,” said Steve Knell, general manager of Oakdale Irrigation District. “We’ve suspected all along that higher flows don’t make more rainbow trout, and now we have the evidence to prove it.”

Media Opportunity: Press are invited to record photos and video of FISHBIO’s 2016 snorkel survey at 10 a.m. Tuesday, Aug. 16, at Knights Ferry Recreation Area. Please contact Erin Loury (408-205-7444) to confirm. Additional media opportunities may be made available upon request. Photos of the 2015 snorkel survey are available at: https://www.flickr.com/photos/fish-bio/albums/72157658206636120

About FISHBIO: FISHBIO is a fisheries and environmental consulting company with offices in Chico, Oakdale and Santa Cruz, Calif., and Vientiane, Laos. FISHBIO is dedicated to advancing the research, monitoring and conservation of fishes around the world.

About OID, SSJID and Tri-Dam Project: OID, SSJID and the Tri-Dam Project provide water and power to Central Valley agriculture and residential communities. Collectively, they have funded fisheries research and monitoring in the Stanislaus River since 1991, during which time they have contributed substantially to the understanding of salmon and trout populations in the river.

Tiny desert fish at risk of…

The Center for Biological… - GO>