The Status of Rainbow Trout (Oncorhynchus mykiss) in the Stanislaus River:

The health of the Stanislaus River population of Oncorhynchus mykiss (rainbow trout and steelhead) has become an increasing concern due to changing conditions in the river. Water temperatures have been unusually warm over the past year due to low storage in New Melones Reservoir. The reservoir’s coldwater storage has now been depleted by a combination of continued drought and high water releases in recent years. As a result, the temperatures of released water have increased substantially. Annual snorkel surveys to estimate the abundance and distribution of O. mykiss provide an opportunity to document shifts in the population in response to changes in habitat and water temperature in the Stanislaus River, and have been conducted every late-summer or early fall since 2009. The 2015 snorkel surveys were completed in mid-August, and reveal a drastic decline in the abundance of the O. mykiss population. This report presents our initial findings from the 2015 survey, and explores potential mechanisms leading to the substantial declines in abundance of O. mykiss in the Stanislaus River. In addition, the results from the 2015 surveys were compared to results from surveys conducted since 2009.

With the exception of one year (2011) when the lowest reach was not sampled, surveys have been conducted annually from Goodwin Dam to Oakdale (Figure 1). The methodology used is a two-stage sampling scheme originally developed by Hankin and Reeves (1988). The survey methodology has been adapted slightly in order to survey larger and longer habitat units, with the key difference being the use of up to four divers in each selected habitat unit. Detailed survey methodology, key assumptions, and estimation methods can be found in Lee et al. (2015). Briefly, habitat units are classified into four different habitat strata (runs, riffles, pools, and cascades); however, only runs, riffles, and pools are surveyed. Estimated total abundance is calculated by multiplying the average number of fish estimated in each habitat strata (e.g., riffles) by the total number of habitat units. The total abundance does not include O. mykiss that potentially reside in cascades or other units that cannot be surveyed due to safety concerns, but these represent a very small amount of total habitat area. The units are randomly selected for the first stage (units are dove one time) and the second stage (units are dove four times).

Snorkel surveys were conducted from August 3–12, 2015, using similar methods relative to previous years, but with an increased sampling rate within each habitat stratum. Survey effort was also shifted from lower reaches (Valley Oak to Oakdale) to upper reaches (Goodwin Canyon) to increase the precision of the abundance estimates. It should be noted that these shifts in sampling effort between reaches do not bias or affect the resulting estimates of abundance in a substantial manner, but they do typically result in greater certainty in the estimates by reducing the confidence intervals surrounding the point estimates. No other changes in methodology or personnel have occurred since 2009. 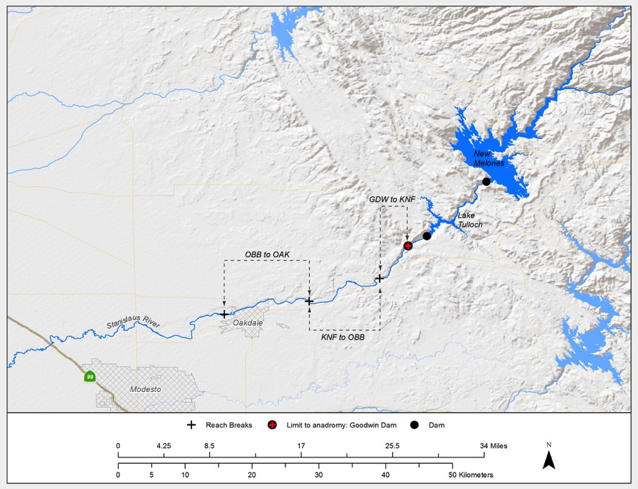 The estimated abundance of O. mykiss (all life stages combined) in the Stanislaus River based on snorkel surveys in 2015 was 5,012 fish, which is the lowest abundance on record (Figure 2). River-wide abundance estimates from 2009 to 2014 have averaged just over 20,220 O. mykiss, and have never been estimated to be less than about 14,000 (2009). In terms of percentage, the 2015 estimate is about 25% of the long-term average and 35% of the previous lowest estimate. Prior to 2015, no significant fluctuations in abundance were observed, with the exception of 2012, when estimates of abundance were > 37,000 O. mykiss from Goodwin Dam to Oakdale. 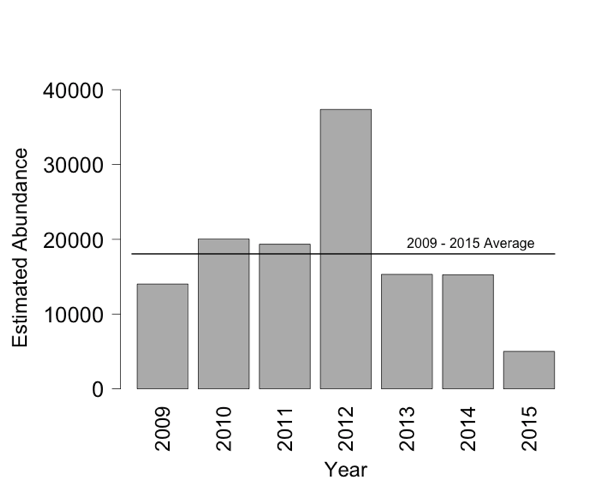 Both age classes of O. mykiss (young-of-year (YOY) and Age 1+) have been observed each year since 2009, with no notable shifts in age composition over the period of record (Figure 3). The abundance of both age classes has generally declined as total abundance has declined. Although the presence of YOY in 2015 indicates at least some successful O. mykiss reproduction during this year, fewer individuals were observed relative to previous years. Low abundance of YOY below Orange Blossom is expected, as nearly all spawning occurs in the Goodwin and Knights Ferry reaches. The most substantial decline in YOY abundance occurred in the Knights Ferry reach, where elevated water temperatures have likely had a greater impact on reproductive success than in the Goodwin reach, which typically has cooler temperatures.

We selected two metrics to describe population density: the number of O. mykiss calculated per river mile, and the average number counted in each of the sampled habitat units. Each of these metrics can be compared across reaches both within and between years.

We evaluated occupancy for each year and reach to assess how many sampled habitat units were occupied by at least one O. mykiss. From 2009 to 2012, nearly all (~95%) of the sampled units in the Goodwin Canyon and Knights Ferry reaches contained at least one O. mykiss (Figure 5). Occupancy in the Knights Ferry reach began to decline in 2013, and in 2015, only 80% of the units sampled had at least one O. mykiss. Occupancy in the Goodwin Canyon reach also declined slightly in 2013, but remained high. In 2015, just under 85% of the sampled units were occupied in the Goodwin Canyon reach. A more precipitous decline was observed in the Orange Blossom Bridge reach, from nearly all units occupied in 2012 to less than 10% occupied in 2015.

Interestingly, the range of O. mykiss distribution did not substantially change in 2015 compared to previous years, unlike many of the other population characteristics examined. With the exception of 2011 when surveys only extended to Orange Blossom Bridge (RM 46.9), O. mykiss have consistently been observed, albeit at low densities, downstream to the Highway 120 Bridge (RM 41). The continued presence of individuals to this downstream extent demonstrates that while the population has sustained substantial impacts, some individuals are still capable of persisting in lower quality habitats and warmer temperatures. These more tolerant individuals are important for resiliency in re-building the population after events such as the current drought. 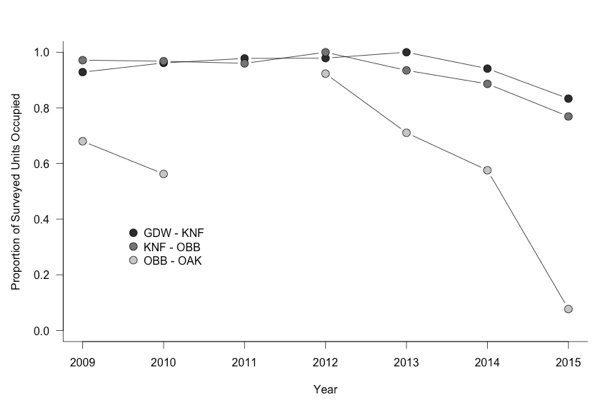 Figure 5. Proportion of sampled habitat units by reach and year occupied by at least one O. mykiss during snorkel surveys conducted on the Stanislaus River from 2009 to 2015. Note: no survey was conducted from OBB to OAK in 2011.

To evaluate the potential influence of flow on O. mykiss abundance, we plotted trends in abundance and flow, and found that small variations in flow from year-to-year do not substantially affect abundance (Figure 6). With the exception of peak O. mykiss abundance occurring in 2012, following extremely high flows due to flood control operations in 2011, abundance estimates have not tracked well with the volume of flow released during January–August of the year prior. For instance, flows were higher at Ripon in 2012 and 2013 than during 2008–2010. However, despite these higher flows, O. mykiss abundance was lower in 2013 than during 2009–2011, and abundance has continued to decline to the record low observed in 2015.

Estimated O. mykiss abundance during 2009-2015 tracks very closely with water temperatures, and lower O. mykiss abundances was observed in years following warmer summer temperatures (Figure 9). Because this trend shows a one-year lag in the observed response of the population to elevated summer water temperatures, an even greater decline in abundance may be on the horizon for 2016 as a result of the unprecedented temperature conditions during 2015. Further, the number of Age 1+ O. mykiss, a portion of which will form the spawning population in winter 2015/2016, has decreased substantially. This is expected to result in reduced production of YOY in 2016 in addition to the reduced Age 1+ population, resulting in an expected further decline in total O. mykiss abundance in 2016.

Figure 6. Estimated abundance of O. mykiss relative to flow at Ripon during  January–August of the previous year. 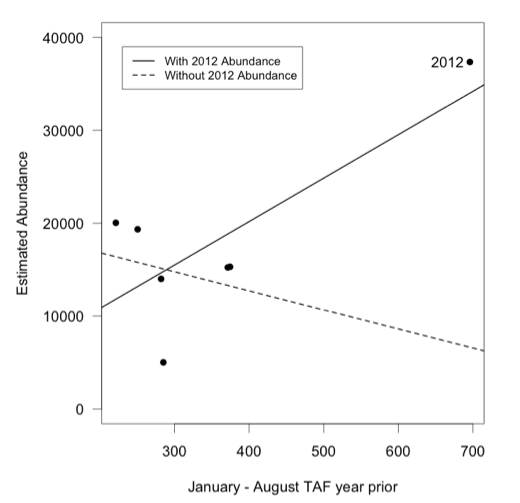 Figure 7. Regression analysis of abundance relative to flow at Ripon during January–August of the previous year. 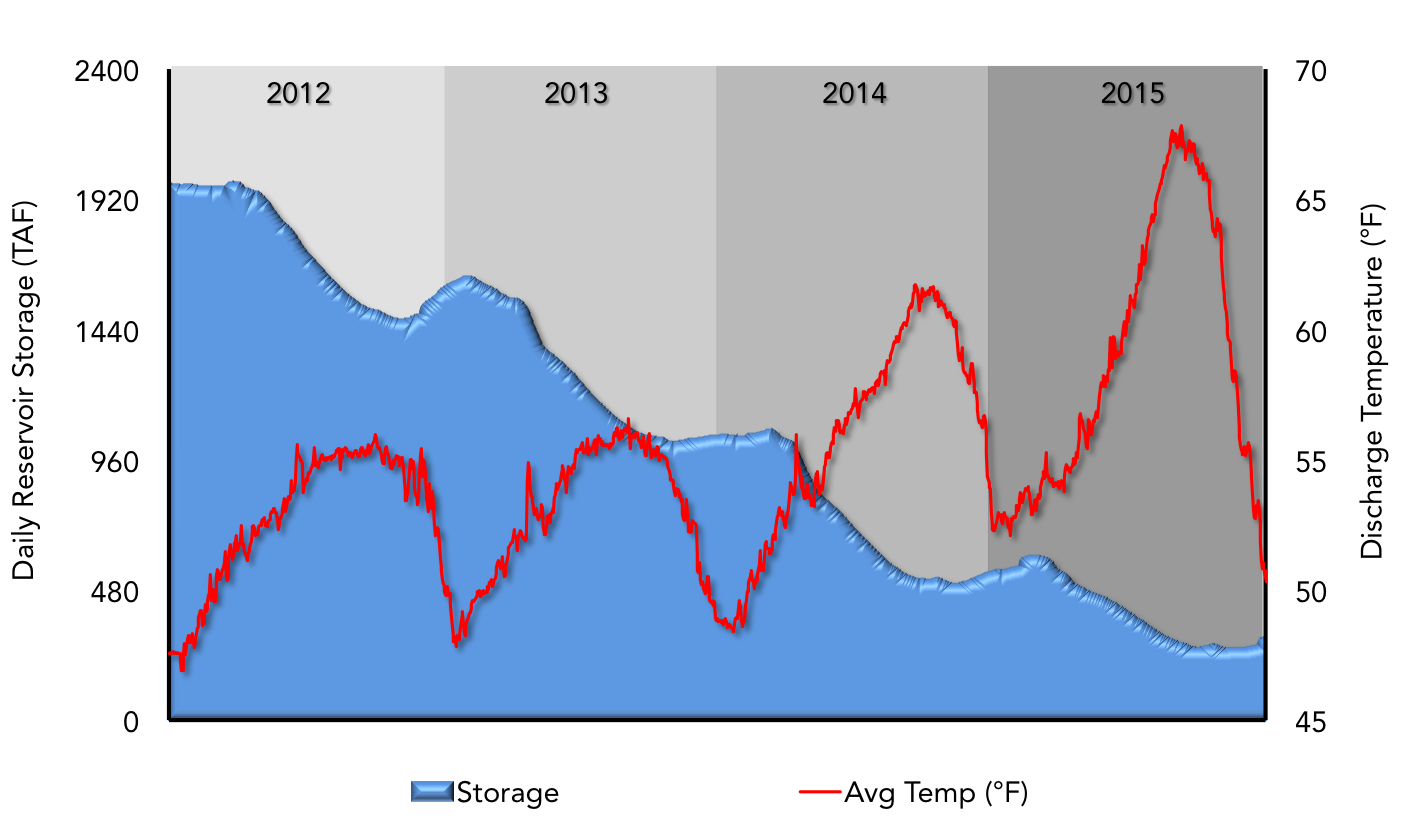 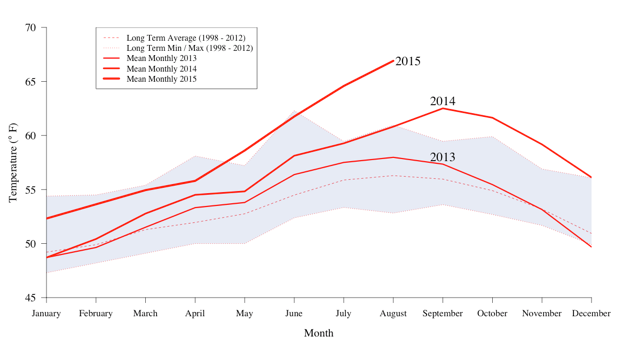 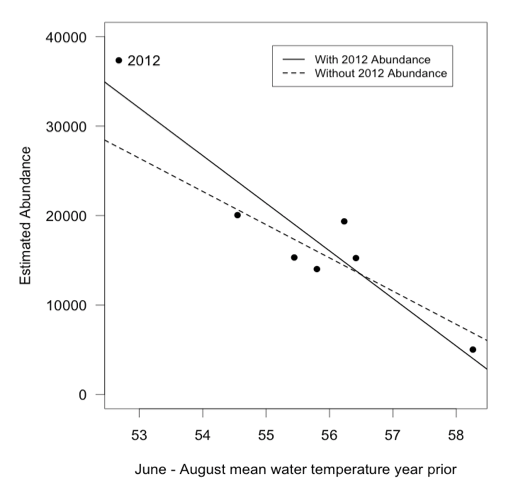 Figure 11. Regression analysis of abundance relative to water temperatures at Goodwin during summer (June – August) of the previous year.

Concurrent with the decline in O. mykiss abundance, other changes were observed on the river in 2015, with the substantial increase in water temperatures the likely causative mechanism. A pronounced shift in the fish community was observed below Knights Ferry, with higher relative numbers of Tule perch and black bass compared to previous years. Microhabitat usage by these species was also observed to have shifted relative to previous years. During surveys conducted from 2009 to 2012, observations of Tule perch and black bass were generally limited to slower currents and backwaters. During 2015, it was observed that these species were utilizing areas with higher current velocities near transitions from riffles to pools or runs. In previous years, these zones were more often occupied by O. mykiss. However, as a result of elevated water temperatures, occupancy has likely shifted, resulting in reduced O. mykiss abundancether notable changes in the aquatic ecology of the Stanislaus River included the observation of increased numbers of large striped bass as far upstream as Knights Ferry, a pronounced increase in filamentous algae on the substrate, and an apparent decrease in macroinvertebrate densities.  All of these factors may be attributed to increased water temperatures and may contribute to reduced abundance of O. mykiss.