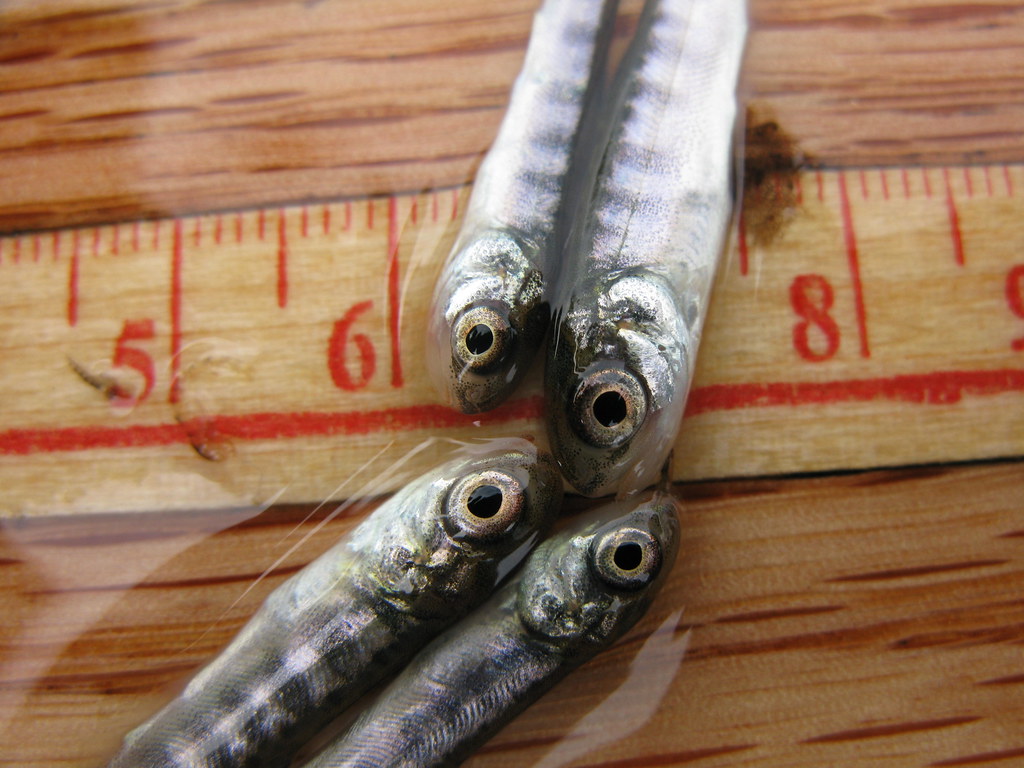 In the salmon circle of life, fewer spawning adults returning to freshwater in the fall typically means fewer offspring will make their way out to sea the following year. In a previous Fish Report, we described the disappointing returns of adult fall-run Chinook salmon to the Sacramento River Basin in 2017. As expected, this reduced adult escapement resulted in extremely low estimates of juvenile Chinook salmon outmigration from the upper Sacramento Basin in early 2018. The 2018 estimates of weekly passage at the Red Bluff Diversion Dam on the Sacramento River were the lowest they have been in 15 years, including the period following the collapse of the salmon fishery in 2008–2009. Low numbers of juvenile salmon outmigrating in 2018 means that fewer fish will probably return to the Sacramento Basin as adults in 2020, likely foreshadowing another season of poor fishing and poor returns.

Outmigration from the upper Sacramento River Basin is estimated weekly by the Red Bluff Fish and Wildlife Office, which established a juvenile fish monitoring program using rotary-screw traps at the Red Bluff  Diversion Dam in 1994. This monitoring program is the one of the longest running rotary screw trap monitoring locations in the Central Valley, established shortly after monitoring locations at the Glenn-Colusa Irrigation Diversion on the Sacramento River, and on the Stanislaus, American, and Mokelumne rivers. A primary objective of the Red Bluff sampling program is to define seasonal and temporal patterns of abundance for all runs of Chinook salmon (winter-, spring-, fall- and late-fall-run) and steelhead passing the Red Bluff Diversion Dam. Juvenile salmon passing the dam could have originated from either the Coleman National Fish Hatchery on Battle Creek, or anywhere in the river between Keswick Dam and the Red Bluff Diversion Dam, an area encompassing the mainstem Sacramento River and Battle, Clear, Cottonwood, and Cow creeks, among others. While estimates from the Red Bluff Fish and Wildlife Office do not represent the total outmigration of fall-run Chinook salmon from the Sacramento Basin, they do provide an index of abundance that can be used to compare trends in outmigration within and between years.

In 2018, an estimated total of 2,167,747 juvenile fall-run Chinook salmon passed the Red Bluff Diversion Dam (90% confidence limits: 1,224,537–3,110,955; Figure 1). This total is 88 percent below last year’s total of nearly 20 million and is only 14 percent of the 15-year average (Brood Years 2003–2017). Low juvenile outmigration at Red Bluff was likely a reflection of the low adult escapement totals observed in the basin in 2017. Only 11,726 adult fall-run Chinook salmon returned to the upper Sacramento River Basin in 2017, which is only about 12% of the 15-year average (95,528; Figure 1). The majority of salmon that escaped the harvest and spawned in the upper Sacramento Basin in 2017 were likely offspring of fish that spawned in 2014 during the drought, when outmigration estimates for the basin were also extremely low (Figure 1). 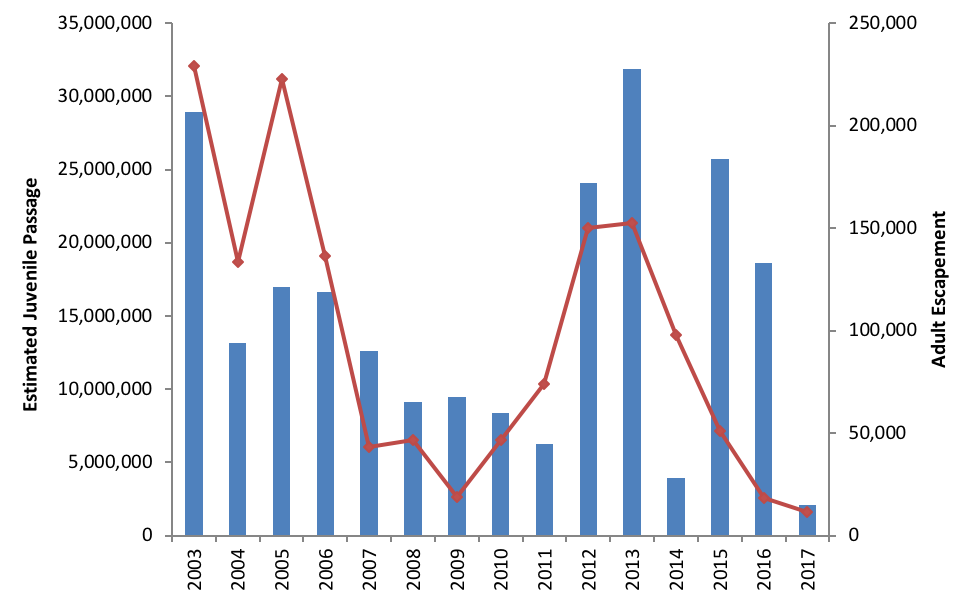 Estimated passage of juvenile fall-run Chinook salmon is typically correlated with the previous year’s adult escapement in the upper Sacramento River Basin (Figure 2), although the relationship has not been as strong in recent years. This indicates that other factors besides adult abundance may be regulating juvenile salmon production, such as stream flows, water temperatures, survival, predation, rearing habitat, and food availability, among others. An additional reason for the variability may be the influence of Coleman National Fish Hatchery operations, specifically an increase in the trucking of juvenile salmon to San Francisco Bay in recent drought years. Trucking juvenile salmon to the Bay reduces the number of outmigrating juveniles that would be captured at Red Bluff Diversion Dam for a given level of escapement. While offsite releases occurred from 2008–11 and from 2014–15, Coleman has also consistently released fish on site, and therefore it is not clear to what extent hatchery practices may have affected the relationship between adult abundance and juvenile production. 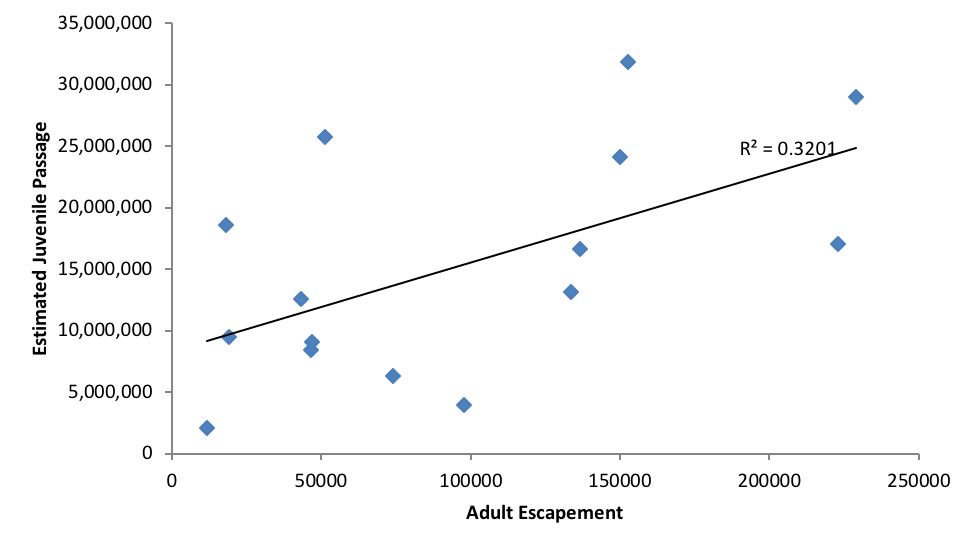 With low escapement and juvenile abundance in Brood Year 2017, we can expect that Sacramento Basin escapement in 2020 will continue to be poor. Fewer outmigrating juveniles this year should theoretically result in fewer ‘jacks’ (early maturing fish) returning to the Sacramento Basin in 2019, which are used as an indicator by the Pacific Fisheries Management Council to set harvest limits for the following season. However, the proportion of jacks in the population has risen in recent years, leading to difficulties forecasting adult salmon ocean abundance. As a result, the number of returning jacks in 2019 should be closely scrutinized, as an inaccurate forecast of Sacramento River adult abundance can lead to overharvest and reduced escapement of Central Valley salmon, similar to what occurred in 2017.