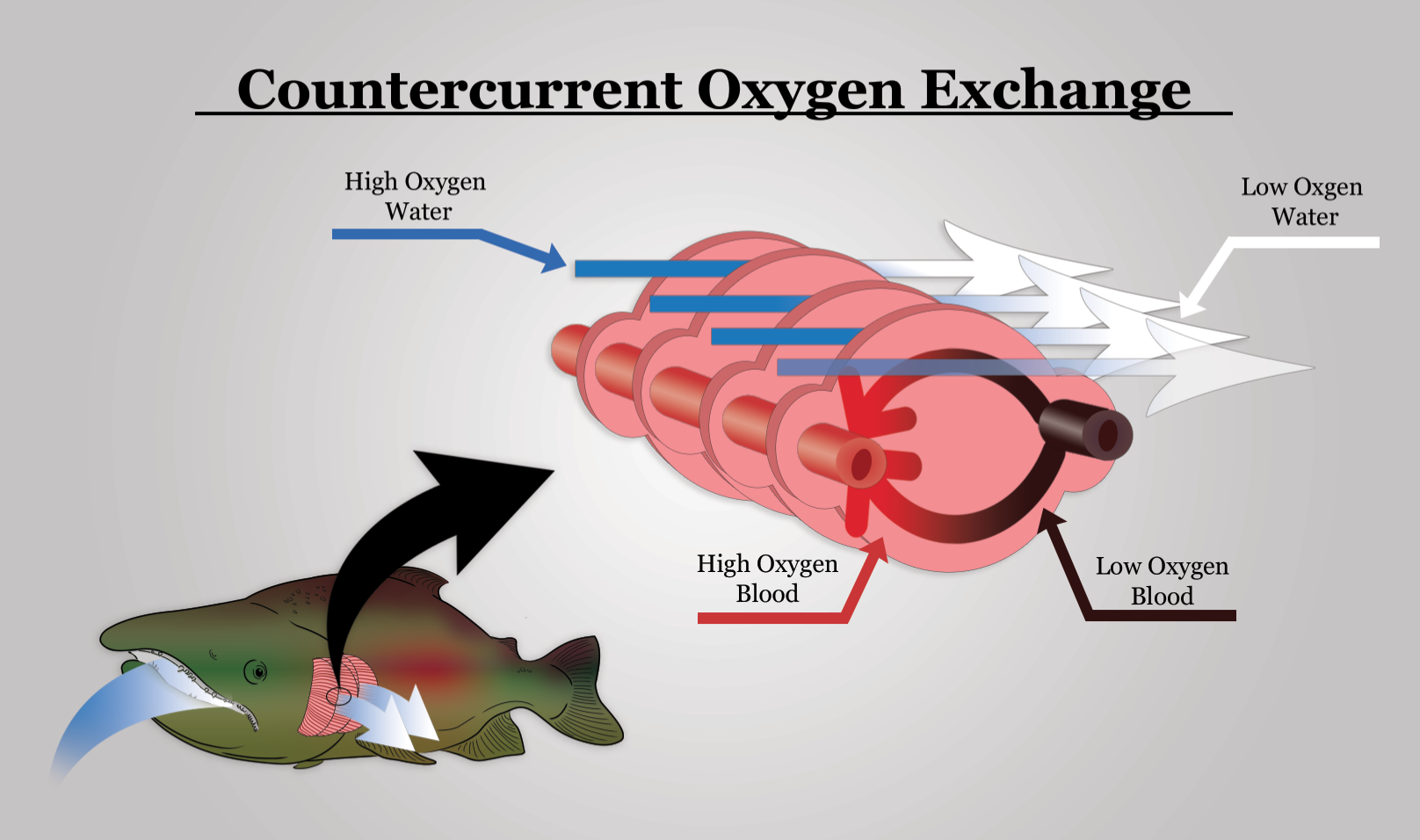 Just like animals on land, fish need oxygen to survive – but rather than breathing air, fish extract their oxygen from the water around them. This is no easy feat because air can hold 33 times more oxygen than water, so fish have to be much more efficient breathers than terrestrial animals. Fortunately, fish have evolved a clever way to overcome their oxygen-deprived environment through their highly specialized gills. The gill is where fish absorb oxygen from the surrounding water into their blood. However, oxygen can only diffuse into the blood at the gills if the oxygen level is higher in the water than in the blood – that is, oxygen needs to flow from an area of high levels to an area of low levels.

Fish gills use a design called ‘countercurrent oxygen exchange’ to maximize the amount of oxygen that their blood can pick up. They achieve this by maximizing the amount of time their blood is exposed to water that has a higher oxygen level, even as the blood takes on more oxygen. Countercurrent oxygen exchange (shown in the figure above) means the blood flows through the gills in the opposite direction as the water flowing over the gills. This flow pattern ensures that as the blood progresses through the gills and gains oxygen from the water, it encounters increasingly fresh water with a higher oxygen concentration that is able to continuously offload oxygen into the blood. The low-oxygen blood, which is just entering the gill, meets low-oxygen water. Since there is more oxygen in the water, the oxygen can flow from water to blood. Likewise, the high-oxygen blood, which has nearly passed the entire length of the gill, meets fresh, high-oxygen water, and oxygen continues to flow from water to blood.

If fish instead had blood flowing in the same direction as water through their gills (called ‘concurrent flow’), the low-oxygen blood entering the gill would first meet the high-oxygen water also entering the gill. Oxygen would quickly pass from the water into the blood, until the oxygen levels of the blood and water rapidly became the same, and oxygen diffusion into the blood would stop. The maximum amount of oxygen that the blood could pick up would be only half of the total amount of oxygen in the water. In contrast, countercurrent oxygen exchange allows the blood to pick up 90 percent of the oxygen in the water. This impressive ability to acquire oxygen allows fish to thrive in water that has oxygen levels only a tenth of those at the top of Mount Everest, where most people cannot survive without supplemental oxygen. It just shows that fish are truly masters at breathing.