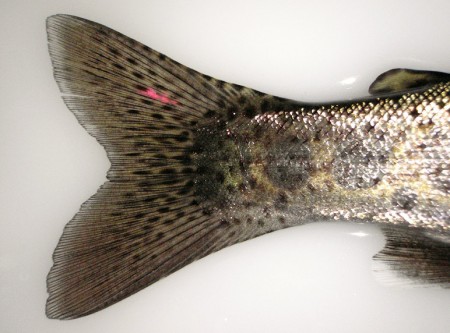 This rainbow trout (Oncorhynchus mykiss) is donning a pink mark on its caudal fin not because it is the “in” color for spring fashion aficionados, but because it will allow for identification if recaptured. Fish marking and tagging is a common practice for identifying individual or groups of fish for the purpose of later identification, usually to help estimate the total number of fish in a population. In this case, this trout was marked with a pink fluorescent dye using a MadaJet gun, a needleless injector that many dentists use to inject Novocain and other drugs. The marked rainbow trout was released upstream of a rotary screw trap with a number of others. The proportion of recaptured marked fish to unmarked fish was used to estimate the captured rate of the trap, and ultimately the number of unmarked fish that migrated downstream past the trap that night.