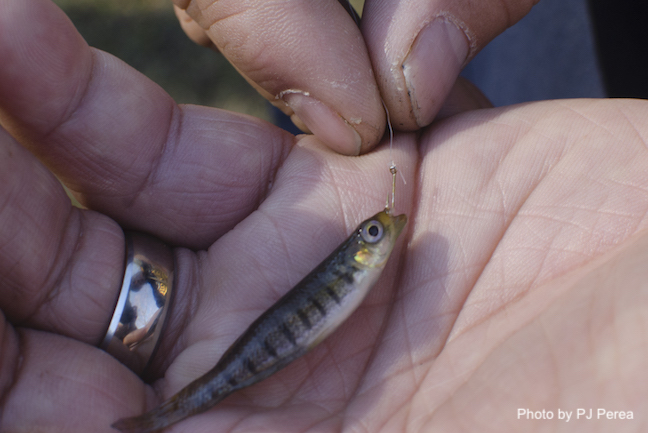 For most, a good day of fishing is judged by the size of the fish that you catch – everyone wants to catch a ‘monster’ (or toad, hog, pig, lunker, slob…) and gain the associated bragging rights. But a growing body of anglers is judging their success a bit differently. To this new variety of fisher, a two-inch fish is more of an accomplishment than a 22 inch fish: the smaller the better. Originating in Japan, microfishing is the pursuit of small and overlooked fish species like minnows, dace, darters, and sculpins. For microfishers, not only is the (small) size of the fish important, but so is the variety or number of species that have been caught. Similar to birders, microfishers keep a lifelist to judge their exploits by the total number of species caught over their lifetimes. Some people have hundreds of species on their list, and some, like one Steve Wozniak of California – (not the co-founder of Apple) – is on a quest to catch 2,000 different fish species. Of course, catching this many different species requires a certain type of individual who, besides having a sizeable travel budget, is willing to turn a hobby into what Wozniak calls a “twisted obsession.”

Catching tiny fish requires specialized gear that is not always easy to find. To catch these dwarfs, only the smallest hooks and lightest line will do, which can usually only be found in the fly fishing or ice fishing section of your local tackle shop. But for real microfishing enthusiasts, the best tackle and tiniest hooks must be bought in Japan, which seems to have a monopoly on all things tiny, including the microfishing market. However, it remains unclear if there is any tackle in the world that is small enough to catch the Indonesian minnow Paedocypris progenetica, which can mature at sizes of less than 8 mm. We may need to take a detour on one of our next trips to Southeast Asia to find out.