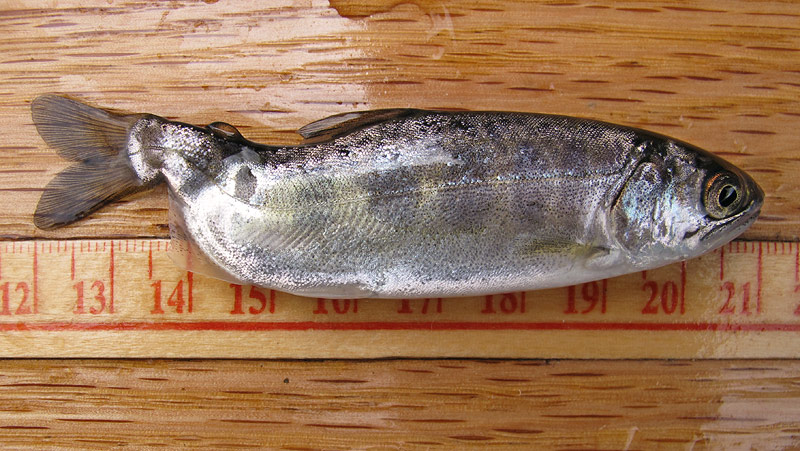 Perhaps a metaphor for the condition of California’s Central Valley native fisheries, this salmon smolt is dangerously out-of-whack. As salmon populations continue a general decline in California, we wonder if the region’s fish and water managers are ready to make the tough decisions, and if citizens are ready to pay the price, to recover all native fish populations around the state, and not just the tasty sportfish. For most people salmon and steelhead come to mind when they think of declining native fish populations, but long-term monitoring suggests that native fish now make up less than 2% of the fish abundance in the south Delta (Feyrer and Healey 2003). That’s an indication of an ecosystem that is severely out-of-whack, and it’s difficult to believe we will be able to recover salmon and steelhead without restoring the balance for other native fish species as well.

It’s surprising a fish this deformed has survived this long, considering how poorly it must swim and how attractive it must be to predators. Spinal deformities in fish can take a number of forms, including lordosis (swayback), scoliosis (curve from side to side) or kyphosis (hunchback), and are more common in hatchery settings than in the wild (Evans and Neff 2009). Although these deformities can be caused by a number of environmental factors (temperature, infectious diseases, malnutrition, and exposure to pollutants), researchers have also found that the genetics of the parents can play an important role as well (Evans and Neff 2009). No matter what caused this salmon’s deformation, our guess is that its days are numbered as it continues its migration downstream, where predator populations are considerably higher than in the upper tributary location where we photographed it.