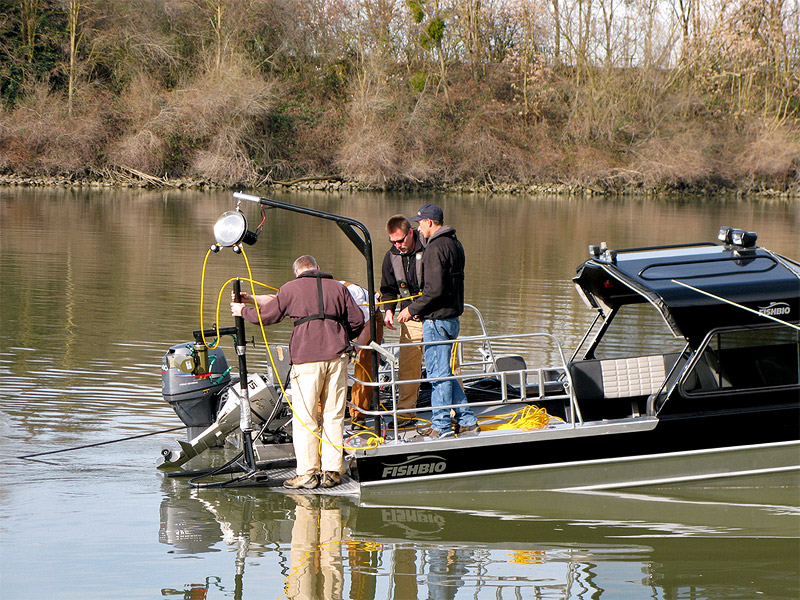 The use of acoustic telemetry to monitor fish movements, behavior and survival has quickly gained popularity among fisheries researchers in California’s Central Valley within the past 10-15 years.  Primary fish species involved in acoustic telemetry studies are anadromous fish such as Chinook salmon, steelhead and green sturgeon as well as predatory fish such as striped bass.  Acoustic tags and technology allow researchers and managers to determine the numbers of tagged fish that migrate through specific routes, reach-specific survival rates, and movement rates.  Acoustic tags emit a pulse of sound at certain frequencies and in certain sequences (in milliseconds), that allow automated listening stations to hear the tag, then decode a unique tag ID.  The typical research plan typically consists of tagging a batch or batches of fish, releasing them, and tracking their movements either with fixed listening stations or hydrophones or through mobile surveys.

Many different groups (state and federal agencies, consulting firms, and universities) are conducting acoustic telemetry research.  In 2012, most research is being focused on Chinook salmon and steelhead smolts, and in particular, their survival rates through certain areas of the Delta and lower portions of tributaries that flow into the Delta.  With better knowledge of survival rates and movement patterns of Chinook and steelhead smolts through the Delta, water-export facilities can be operated with less risk to threatened and endangered species.

As you can see, our boat is nearly overloaded as we deploy an HTI acoustic array system in the lower Sacramento River to evaluate juvenile Chinook migration and survival.