The concept of tracking fish is nothing new to anglers and fisheries scientists. For as long as we have been relying on fish as a source of food, we have wanted to know where they are and how to catch them. As fisheries scientists, understanding movement patterns on a finer scale is important in many ways. Acoustic telemetry can provide valuable information on the behavior and survival of individual fish, since every tag has its own predetermined signal that is emitted and the frequency is received and recorded by receivers (hydrophones). With the use of acoustic (or ultrasonic) tags, we can determine the type of habitat the tagged fish prefers, which route it will likely take and where hotspots for predation occur in the region. 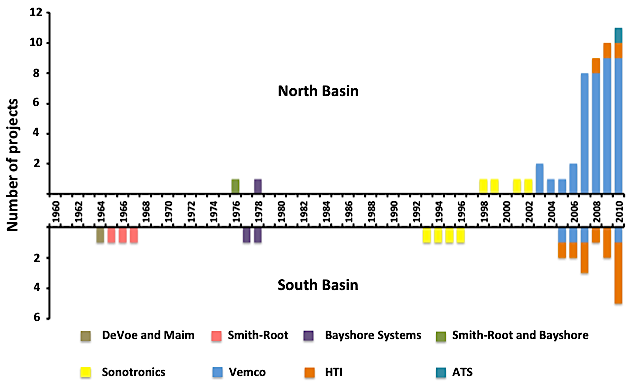 The first known use of acoustic telemetry in the Sacramento – San Joaquin Delta was a 1964 study on adult Chinook salmon. The tags were large (up to 4 inches long) and were attached externally near the dorsal fin of adult fish. In recent years, tagging fish with acoustic tags has become more popular because tags have been made much smaller (under 0.5 inches) and can be surgically implanted in juvenile fish (Figure 1). As more fisheries researchers began utilizing acoustic telemetry technology, hydrophones became more widespread in the Delta. Soon, it became evident that collaboration would be beneficial and cost effective; thus, in 2007 the California Fish Tracking Consortium was developed to facilitate sharing acoustic telemetry information. There are currently over 300 hydrophones that range from the Sacramento River in the north (near Redding), down to the most southern part of the San Joaquin River (near Fresno) and out to the Golden Gate Bridge (Figure 2). 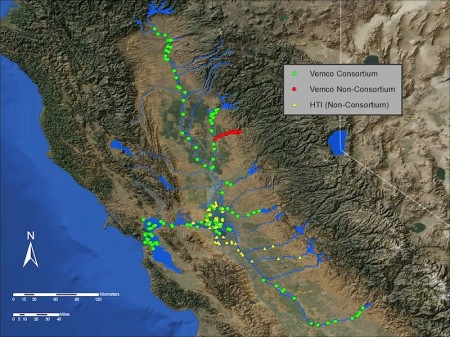 Figure 2. Map of acoustic hydrophones in California’s Central Valley. Hydrophones are identified as Vemco or HTI and either California Fish Tracking Consortium or non-consortium.

Some acoustic telemetry studies focus in on a fish’s route selection and probability of survival, which could include predation rates, while others concentrate on determining a fish’s behavior in relation to specific structures or facilities. In the case of the Vernalis Adaptive Management Plan (VAMP), an acoustic telemetry study evolved over time into a study that incorporates multiple factors that affect salmon survival. In the Delta, there are multiple routes to the sea, and the route that the fish chooses can affect its chance of making it to the ocean. Initially, the goal of VAMP was to estimate survival and route selection of Chinook salmon smolts at different flows and exports in the presence or absence of the head of Old River barrier (HORB), but as the study progressed it was apparent that factors other than flows and exports were important. During the VAMP study, immobile tags (tags no longer moving because the fish is dead) were frequently found in places that were well known for good bass fishing. Furthermore, some tagged smolts suddenly developed behaviors indicative of predators (e.g., milling around in one spot for long periods of time, or making long-distance movements back upstream), indicating that predation upon Chinook salmon smolts may be more prevalent than previously presumed. When predatory fish tagging was added to the program it was discovered that striped bass, black bass, and other predators were milling around the state and federal diversion facilities where fish are salvaged and trucked downstream before entering the pumps.

The use of acoustic telemetry in the field of fisheries has significantly increased our knowledge of fish behavior. The majority of the tags that have been used in the Delta are for tracking salmonids and a smaller portion of tags have been used on sturgeon. The results from salmonid acoustic studies have led many to believe that predation by non-native fishes is one of several factors in the decline of native salmonids in the Delta. As a consequence, more acoustic tagging has been conducted on predatory fishes to better understand their habits and how we can protect native fish populations.