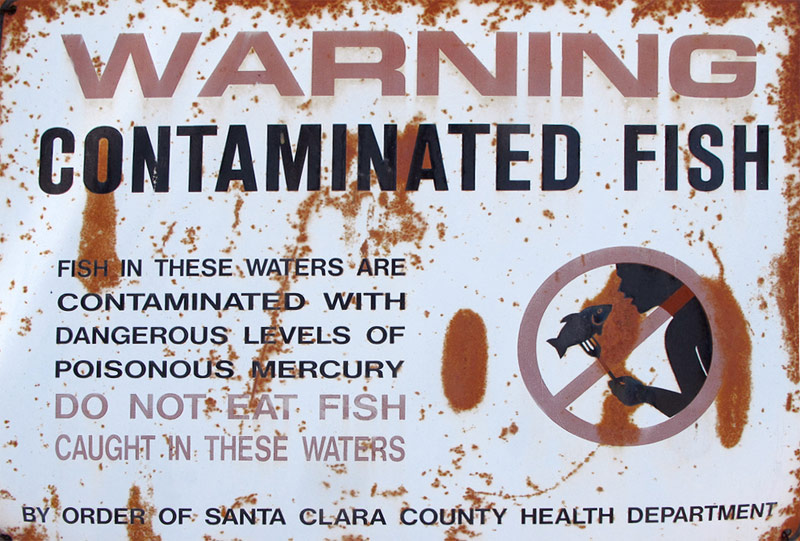 As made blatantly clear by this sign, posted at Calero Reservoir, many fish in California waters are not safe to eat due to contamination by mercury. Recently, FISHBIO and URS Corp collected juvenile largemouth bass using electrofishing in several Santa Clara Reservoirs to test for mercury content. Mercury is a heavy metal that occurs naturally in the environment and is a common element in the California Coast Ranges, where it was mined largely to support gold mining operations throughout the state. Miners used mercury to bind gold particles in a gold-mercury amalgam. The loss of mercury through this process ranged from 10-30% per season resulting in an estimated 3-8 million pounds or more of mercury lost to the environment from the 1860s through the early 1900s (USGS 2000). Mercury occurs in several different forms with methylmercury being the most prevalent and toxic form that readily incorporates into biological tissues. Methylmercury is found in fish, which upon being eaten by humans, can harm the development of fetuses and children, and affect the nervous systems of adults.  Methylmercury concentration increases as it travels up the food chain (bioaccumulates), so fish that eat vegetation such as, California roach, typically have lower levels than fish that eat other fish and top predators (such as bass) tend to have the highest levels of methylmercury. As we point out in our previous post, The Flip-side of Fish, the Office of Environmental Health Hazard Assessment (OEHHA) in California still recommends eating fish because of the health benefits but provides readily available safe eating guidelines on their website to limit consumption.