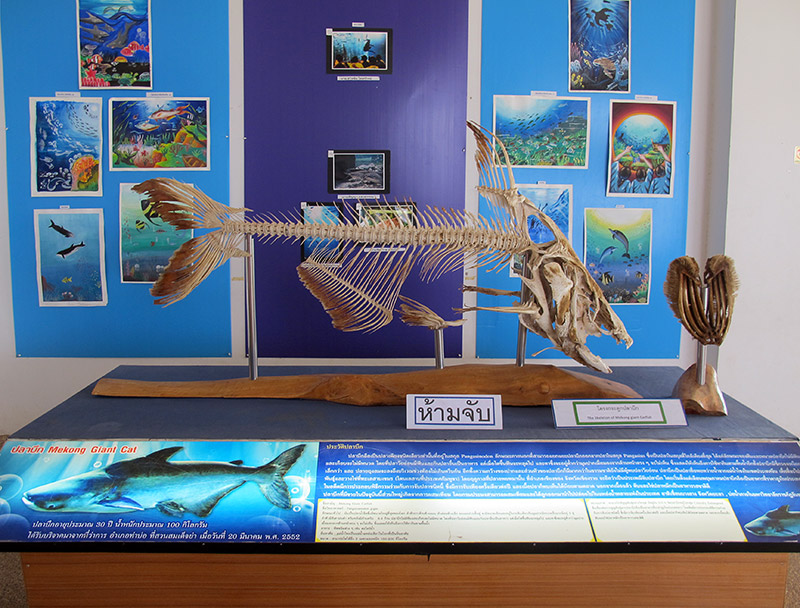 How much do we know about the Mekong giant catfish (Pangasianodon gigas), the world’s largest freshwater fish?  The truth is, not that much.  These days, it is extremely rare to see wild giant catfish in the Mekong River, as their populations have dramatically declined. Fish scientists still don’t know exactly where they go to spawn. Based on fishing catch information, it is believed that Mekong giant catfish migrate from lower parts of Mekong River, including Tonle Sap lake, to upstream areas in Cambodia, Lao PDR or Thailand to spawn (Hogan 2011); however, scientists are still trying to gather information to prove this theory.

Researchers at the Nongkhai hatchery in the Sisengmai district of Thailand hope to establish  a long-term breeding program for this critically endangered species, and have created an exhibit for future generations to learn about Mekong giant catfish.  This photo is of a 30-year-old giant catfish from the Thabor reservoir, which weighed 100 kg (220 lbs), on display at the Nongkhai Aquarium in Thailand. Though impressive, this specimen is a dwarf compared to the largest recorded giant catfish, which weighed in at whopping 350 kg (772 pounds). Hopefully conservation efforts can help endangered wild populations, and ensure that museums aren’t the only place to see Mekong giant catfish in the future.