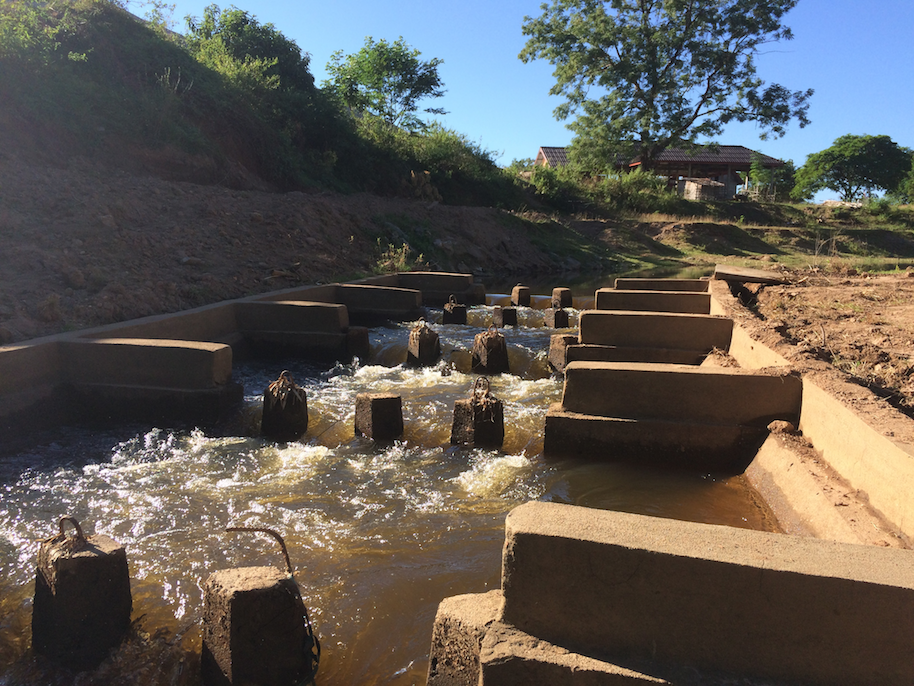 Water infrastructure is being developed at an increasing rate in the Lower Mekong Basin (LMB), and fish passage technology may help alleviate some of the impacts on fish populations, thereby sustaining food security.  FISHBIO was recently invited to present at the “Lower Mekong Fish Passage Conference: Applying Innovation to Secure Fisheries Productivity” held in Vientiane, Lao PDR, which was hosted by the Living Aquatic Resources Research Centre (LARReC) in Lao PDR, and supported by the Australian Centre for International Agricultural Research and the U.S. Agency for International Development. This conference built on a previous fish passage conference hosted by the Lao government in 2013, and it brought together experts in river development, fish passage, and fisheries ecology experts from around the world, along with local government agencies and provincial and district leaders. The objective was to share current research and discuss opportunities for sustaining fish populations and healthy aquatic ecosystems during this period of dramatic economic development.

To set the stage on the first day of the conference, and speakers discussed the overall importance of fisheries in the LMB. In 2015, the economic value of the LMB fisheries was estimated at 17 billion USD, explained Dr. So Nam of the Mekong River Commission during the plenary talks. In Lao PDR alone, fisheries contributed 13% of the national gross domestic product. Dr. Nanna Roos of the University of Copenhagen described how fish can be pivotal in addressing childhood malnutrition in LMB. Fish can be considered a ‘superfood’ because of their long chain fatty acids, vitamins and minerals, and if children can secure good nutrition during the first three years of life, then they will benefit more from the nutrition than in any other period. Dr. Caroline Garaway from the University College London described how fisheries play an important and diverse role in the livelihoods of people in the Lower Mekong Basin, so it is important to consider how development may cause uncertainty in people’s lives, and to look for ways to support sustainable livelihoods. Dr. Ian Cowx, University of Hull, explained how it is possible to communicate the importance of fish conservation and fisheries livelihoods by talking in terms of ecosystem services. Later in the day, FISHBIO researchers followed up on this topic by presenting on the importance of ecosystem services of wetlands in Cambodia and Vietnam, with a particular focus on our ongoing project funded by SUMERNET.

Presentations in the second day examined fish passage projects in the Lower Mekong Basin and provided technical details on fish passage successes and challenges. Participants toured the fishway at Pak Peung wetland in Pak San and heard from researchers and district officials involved in the design and implementation of the project. This demonstrated an example of a successful fishway designed specifically for Mekong fish species. The final day of the conference focused on hydropower research in the LMB, including lessons learned and developer’s perspectives. Dr. Toby Coe of Fishtek Consulting and Guillaume Morier-Genoud of Poyry gave presentations on the design and development of the fish passage facilities at the Xayaburi Dam, the first dam on the mainstem of the Mekong outside of China. The fish passage facilities at the dam include a massive 500-m long, 18-m wide vertical-slot fish passage that leads to two vertical fish locks, which will lift fish the rest of the way to the top of the dam. As this is the first fish passage of its size in the region, the presenters as well as audience members stressed the need for an extensive monitoring program to determine the effectiveness of these facilities. In the afternoon, Karl Pomorin (KarlTek Pty Ltd.) and Dr. Lee Baumgartner (Charles Sturt University) gave presentations on PIT tag technology and how it could be used in the region. The presenters explained how they have already tested the feasibility of tagging local species and have plans to install PIT tag antennas in the fishway at Pak Peung wetland to collect data on fish passage into and out of the wetland. We are grateful to the conference hosts for planning this valuable conference and look forward to future opportunities to exchange knowledge about fisheries in the basin.