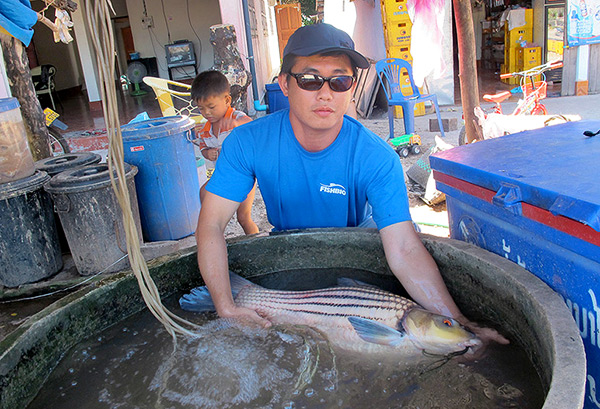 The Mekong River is home to many imperiled living treasures: unique fish species of great cultural, economic, and conservation value that are now endangered. The Jullien’s Golden Carp (Probarbus jullieni) and its cousin the Thicklipped Barb (Probarbus labeamajor) are some of the largest freshwater fishes in Southeast Asia, and are both listed as endangered on the International Union for Conservation of Nature (IUCN) Red List. Though these fishes were once found throughout Southeast Asia, the Mekong basin is the last remaining location of relatively robust populations. Jullien’s Golden Carp were reported as “extremely abundant” in the Mekong as recently as 1989, but both species are believed to have declined by more than 50% throughout their ranges (Baird 2011, Hogan and Baird 2011). Historical reports tell of these fish reaching a hefty 60 kg (132 pounds); however, individuals caught in recent years weigh in closer to 20 kg (44 pounds) (Hogan and Baird 2011).

A number of factors have likely contributed to these fishes’ decline, including alterations to their freshwater habitat and increased gill net fishing. Despite their international conservation status, demand for these favorite food fishes remains high: their large size and succulent flesh make them highly sought after. While fishers catch individuals of all sizes, the larger bodied specimens are the most commercially valuable, and egg-bearing females fetch the highest prices at market. Because of the higher value of breeding fish, fishers in northern Lao PDR target the spawning areas of these fishes during the December-February spawning season, using large-mesh gill nets designed to catch Probarbus species. Harvesting fish before they can reproduce has had devastating effects on their populations. Dams pose another concern, as they may impede movement to spawning grounds. Adult fish need deep pool habitats, but cannot reproduce in reservoirs (Baird 2006).

In addition to their IUCN Red List endangered classification, both species of Probarbus are ostensibly protected under Lao fisheries law, which allows for local consumption of the species outside of their spawning season, but prohibits their sale (Baird 2006). Despite this, large individuals of both species are regularly seen in markets in district and provincial capitals. FISHBIO staff observed Jullien’s Golden Carp for sale in Lao PDR at a large market in the capital of Vientiane, as well as at a remote roadside stall while making a field visit to Bolikhamxay province. Of particular concern, we spotted a mature female fish for sale that was ready to lay eggs (photo above). FISHBIO is currently working to advance the study and conservation of Probarbus populations. 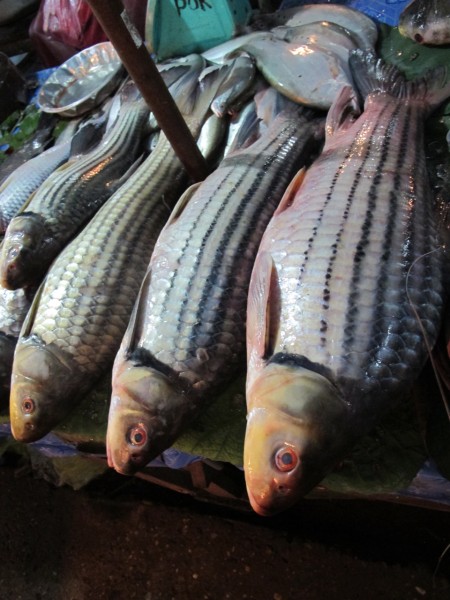