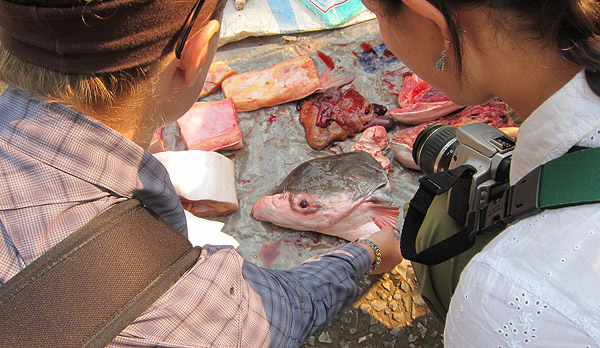 During the past few years FISHBIO has been researching the structure and characteristics of fisheries in villages in the Mekong River basin to assess their significance to the local communities. As we have learned from past experiences, some of the most cost effective fish sampling can be done in local fish markets. The fish markets make it possible to sample many more species of fish without spending the time and effort to capture them. This technique can be very effective when trying to determine the presence/absence of species over a large spatial scale, or identifying undocumented species in the Mekong River Basin.

Perhaps the most iconic species of the Mekong River is the Mekong giant catfish (Pangasianodon gigas). Giant catfish are highly migratory fish, traveling hundreds of miles upriver to spawn. Mekong giant catfish are capable of reaching almost 10 feet (3 meters) in length and an excess of 660 pounds (300 kilograms). Over the past century their population has dropped by 80 percent due to overfishing and loss of spawning habitat (IUCN Red List). International efforts are underway to save this iconic species. It is now illegal to harvest wild giant catfish in some parts of their range, however enforcement is challenging. On a recent trip we spotted a suspected Mekong giant catfish (pictured above; See video) at a morning market in Luang Prabang, Lao PDR. We recorded as much information about the specimen as possible and collected a tissue sample for DNA analysis.

The Mekong River Basin supports the largest freshwater fishery in the world, with harvests over 2.6 million metric tons per year and a great deal of subsistence fishing. Concerns over the wild fisheries and food security in the Mekong River Basin have been on the rise in recent years due to a better understanding of the impacts of climate change on the basin, and a growing movement to increase the number of hydroelectric dams. There are 12 mainstream dams proposed or under development. Some of the proposed dams may limit the Mekong catfish’s access to spawning habitat. Due to the high fish species diversity and the degree to which people rely on these fish as protein, altering the distributions of fish has the potential to affect livelihoods and food security for millions of people. Given the uncertain future of hydrology in the basin, there is an urgent need for informative studies on fish species distribution and migration patterns in the Mekong River Basin.