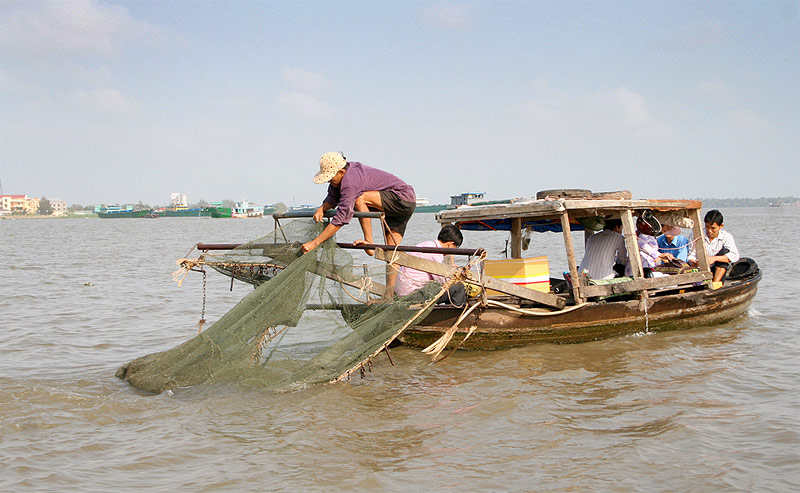 When most of us think of a trawl fishery what comes to mind are the large, sea-going vessels dragging huge nets 200 ft. wide along the sea floor, but in the Mekong Delta of Vietnam the fishery operates on a much smaller scale. The most common method of fishing in the Mekong Delta is the trawl, and it has been reported that 70% of the fishing boats in Vietnam are small-scale trawlers in the Delta (Sinh and Long 2011). The Vietnamese trawlers are a more simplified version of the mid-water trawlers used for monitoring in the San Francisco Bay-Delta. The nets have a large, open front end that reduces down to the back of the net, or the ‘cod end’, where the catch is collected as the net is hand-pulled into the boat. In the Mekong Delta fishers attach the mouth of the net to a heavy pipe, which is dragged along the bottom of the channel. Watch our YouTube video to see a small-scale trawler in action.

We took a tour with researchers from Cantho University to see how they acquire fish samples working with fishermen in the Mekong Delta. Rather than operating their own trawl vessels, it is more efficient for the researchers to hire local fishers to operate the trawl for them. In this case, the researchers are conducting monthly trawl sampling at specific locations in the Hau River, a distributary of the Mekong, to assess the seasonal differences in fish species composition and abundance.