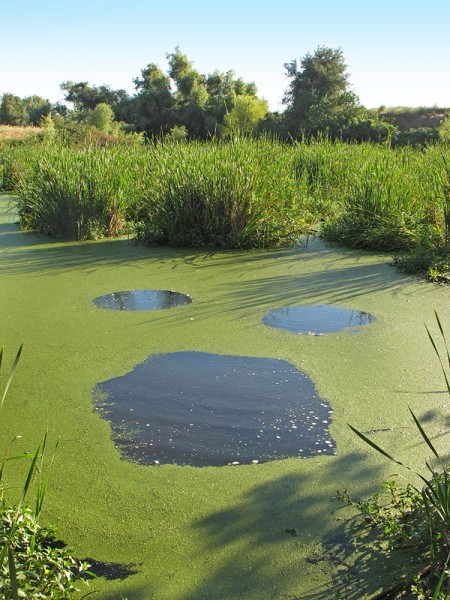 What looks like a pond creature from a late-night Sci-Fi movie is actually millions of tiny floating plants. Aquatic plants that are able to cover an entire water body in a very short period of time are usually thought of as invasive, nuisance species like water hyacinth, but that is not always the case. Duckweeds (Lemna sp.), native to the Western U.S., are some of the smallest flowering plants in the world, but can have an impressive impact. They rapidly multiply, doubling their mass in as little as two days, forming solid mats across a water surface.

Although duckweeds generally don’t negatively impact water quality, they can foul up water diversion screens. These tiny aquatic plants can be quite useful as well. They have been shown to lower water temperature in ponds and slow moving waterways, and reduce evaporation rates by blocking out sunlight. Because of their rapid growth rate and ability to absorb nutrients such as ammonia, nitrates, phosphorous, and potassium, duckweed has been used in the treatment of effluent in wastewater treatments facilities (Ran, N. 2004). Under certain conditions, duckweed has the ability to absorb heavy metals, and can be used as an indicator of pollution or excess nutrients in water bodies (Nasu Y., and M. Kugimoto 1981).

In Southeast Asia, duckweed is harvested and fed to livestock to provide a good source of protein and minerals. Duckweed has even shown potential as a source of organic biomass for the production of ethanol (Kesaano M. 2011). Perhaps someday duckweed can be utilized to treat our sewage, then used to produce ethanol to fuel our cars… talk about recycling!