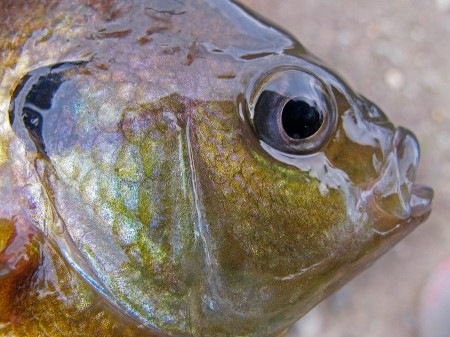 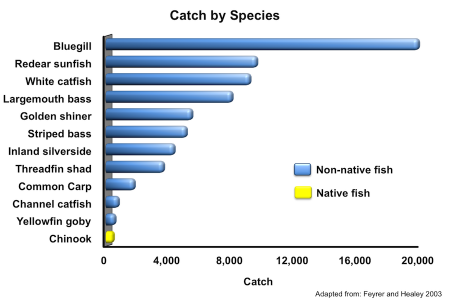 The bluegill (Lepomis macrochirus) may be the most abundant fish in the Sacramento-San Joaquin Delta. Data from a eight year long study of fish in the region, represented in the graph above, demonstrate that the south Delta is dominated by non-nave fish species (Feyrer and Healey 2003). According to the authors, “Only eight native species were captured, none of which represented more than 0.5% of the total catch.” The San Joaquin Delta ecosystem, along with many other western waterways, has been dramatically altered by the introduction of non-native species. Many of these species compete with native fish, such as juvenile salmon, for limited food and space (Marchetti 1999). Others are known to be significant predators of salmon smolts as they move through the Delta (Shapovalov 1936, Stevens 1966, Thomas 1967, Pickard et al. 1982, Merz 1994, Gingras 1997, Tucker et al. 1998).