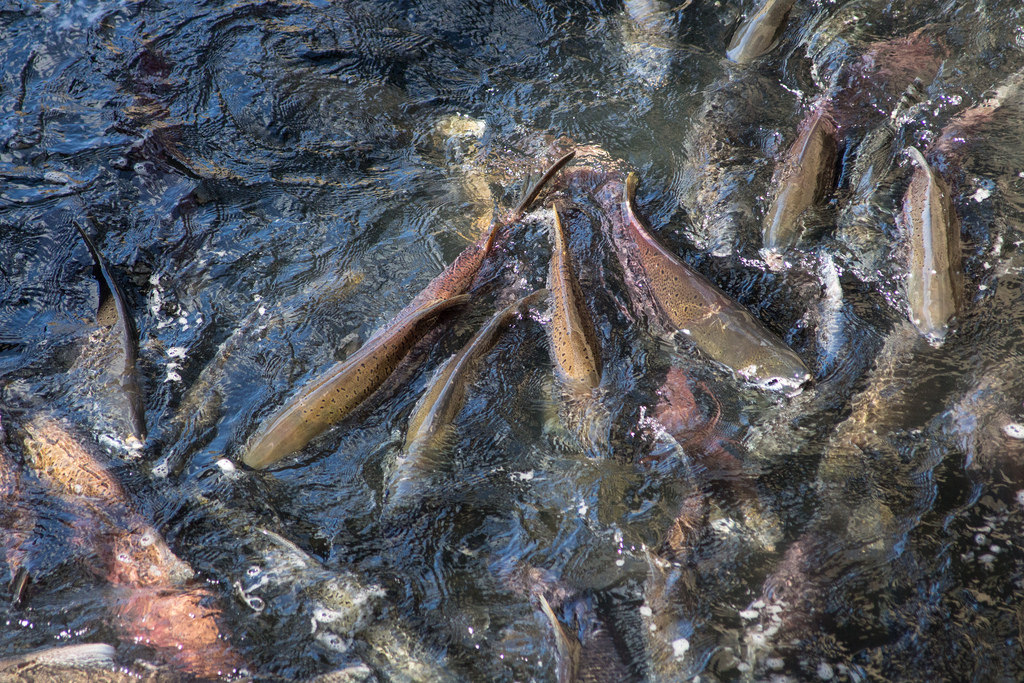 While flying fish have evolved a novel way of getting around, salmon have also been on the move in some surprising ways. They can now hitch a ride around some dams that block their historic migration routes, whether in a truck, barge, or even a helicopter. Dams on almost all the tributaries of the Sacramento–San Joaquin River system have prevented species such as Chinook salmon from accessing 70 percent or more of their historical habitat range, contributing to declining salmon populations throughout the Central Valley. To help boost these numbers, two-way trap and haul (TH2) programs have been proposed as one approach to help salmon reach more spawning habitat. These programs involve trapping, transporting, and releasing adult salmon above impassable dams as they migrate upstream, then trapping, transporting, and releasing juvenile salmon below the dams so they can migrate towards the ocean. While TH2 programs may sound like a straightforward fix, a recent review by Lusardi and Moyle (2017) drew on relevant research and six examples of TH2 programs from the Pacific Northwest, and found many concerns that need to be addressed before additional TH2 programs are started.

Among those concerns, human transportation is stressful for juvenile salmon. The review notes the experience makes the fish more susceptible to disease, and impairs their ability to swim and avoid predators immediately following release. Young fish can also experience delayed effects from being trapped and hauled, including growing slower and entering the ocean earlier at smaller sizes, which leads to lower survival than juveniles not part of TH2 programs. Returning adults that were trapped and hauled as juveniles demonstrate higher rates of straying and fallback below dams after they’ve been released upstream, most likely due to transport diminishing their homing ability. TH2 programs can also stress adult salmon transported above dams, leading to sometimes very high rates of mortality before the fish even spawn. For example, nearly half (48 percent) of transported adult spring-run salmon died before spawning in a four-year study on Oregon’s Willamette River, while a three-year study on transporting stranded adult spring-run Chinook salmon on California’s Butte Creek found 100 percent of the fish died before spawning.

Other negative factors of TH2 programs include possibly jeopardizing the salmon population downstream of the dam by removing large numbers of adults for transport. In addition, it is typically challenging to trap out-migrating juvenile fish, and this low efficiency means that even if a large number of adults are transported to spawn, few of their offspring may be transported to contribute to future salmon runs. Finally, hatchery releases of salmon can artificially inflate the success of TH2 programs, or worse, select for the survival of hatchery fish over natural fish. For example, on the Baker River in Washington State, the number of returning adult salmon each year increased by approximately 30,000 following upgrades to TH2 facilities. However, the number of adult returns was also highly correlated to the number of hatchery juveniles released three years prior, calling into question the success of the TH2 program.

The stressful effects on both juvenile and adult fish, combined with several other concerns about TH2 programs, led the review authors to conclude that “no TH2 program is an unequivocal success,” and TH2 programs will not save winter- or spring-run Chinook salmon in California unless significant changes are made to support the entire life cycle of the salmon. For example, juveniles transported below dams still have to navigate and survive migration through the lower portions of the tributary rivers and the Delta. Here, they encounter few floodplain rearing habitats, high rates of nonnative predation, and a complex maze of canals, streams, and pumps, which contribute to an already low juvenile salmon survival rate. Without addressing these obstacles first, any juvenile fish added to the river system from TH2 programs will most likely not survive the migration to the ocean. As such, TH2 programs may be a temporary fix at best, and significant changes are needed to restore the larger ecosystem in order to preserve Chinook salmon populations. Road trips may be good for families, but make for a problematic travel itinerary when it comes to salmon.