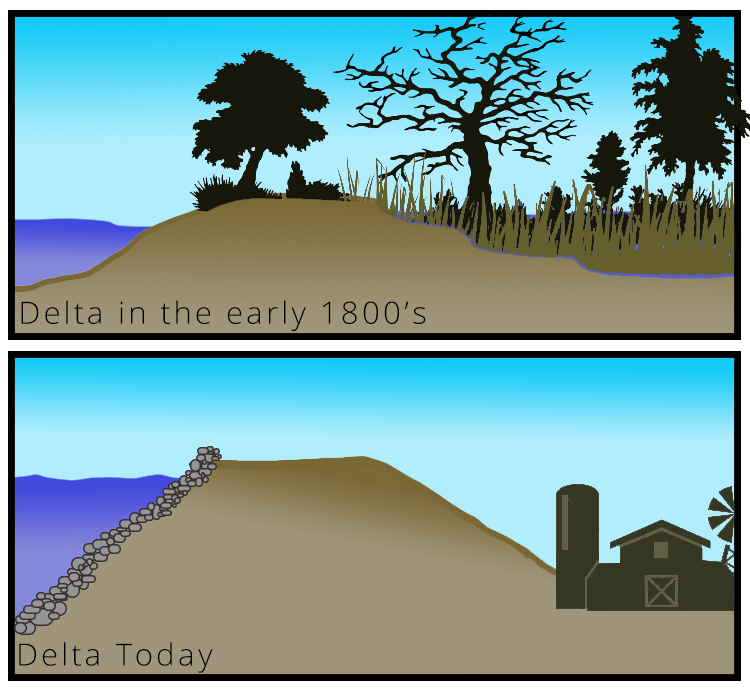 Imagine a verdant, marshy landscape filled with tule elk and pronghorn antelope cautiously grazing while keeping an eye out for the occasional grizzly bear wandering by. In the early-to-mid 1800s, this scenic natural landscape was how the California Delta appeared to the 300,000 Native Americans who inhabited the land. Unencumbered by levees, the Delta freely pulsed and surged in large natural tidal swings, and was filled with native fishes. Today, the Delta is an entirely different place, with the water constricted into channels and the land mostly converted to agriculture. However, the Delta remains an important habitat for juvenile fishes like salmon and sturgeon to grow, and is integral to some species like the Delta smelt. To understand the many challenges currently facing the Delta ecosystem, it’s helpful to have some historical context for how the environment has drastically changed in the last two centuries.

The Delta is a 738,000-acre highly productive zone that is created where two great rivers enter into slower-moving water influenced by Pacific Ocean tides. These rivers are the Sacramento River (flowing from the north) and San Joaquin River (flowing from the south). The salinity of water in the Delta varies depending on the tide, season, and amount of runoff. As settlers began to arrive in California in the mid 1800’s, the Delta was seen as a swampland. The waterlogged marshes were considered to have great potential for farming because of their peat soils, which are rich in nitrates from partly decomposed organic matter. Reclaiming the land for farming meant building barriers to prevent periodic flooding of brackish semi-salty waters that might ruin crops. Originally, all of the marshland was Federal property until California reached statehood in 1850. The land was then handed over to the newly formed state through the Swamp and Overflow Land Act, and parcels were sold to private developers for one dollar an acre in limits of up to 320 acres. Eventually, acreage limitations were lifted, and by 1871, most of the marshland was in private ownership. 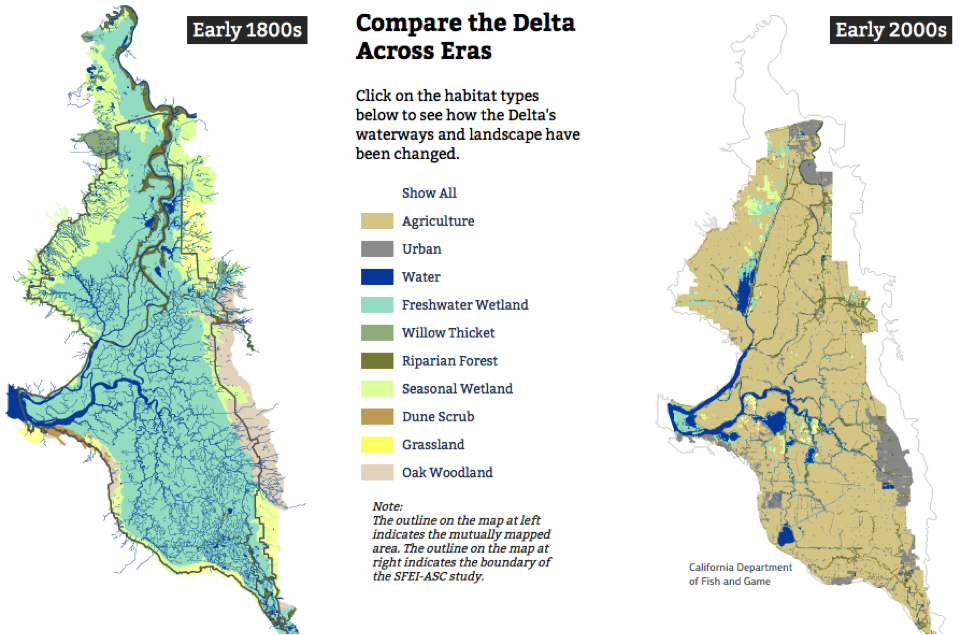 Building levees was a learning process, mostly due to the highly sought-after peat soil. While peat soil was rich for farming, it lacked any structure to serve as a solid barrier. Initial levee walls were four feet high and 12 feet wide at the base. They were built by hand, primarily by Chinese immigrant laborers. Unfortunately, when the peat dried, it would crack and even blow away, making it very difficult to maintain levee walls. By the late 1870s, steam-powered dredges replaced hand labor, and helped to move in stronger alluvial soils (such as clay, silt, or gravel) from the river channel. The process was more efficient, cost effective, and created a longer-lasting levee. 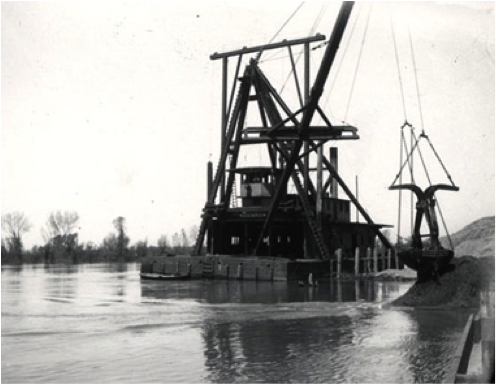 During this time, tracts of land were being formed that are well-known today, such as Rough-and Ready and Roberts islands. Small channels and wetlands were filled to ease development. The meandering and wandering channels were annoying to steamboat drivers, so straight-line canals were cut through, creating definitive angles and lines around the newly reclaimed land. Tracts began producing banner crops of grain and row-crops that were greatly exceeding farm production further inland. Some levees held, while others like Franks Tract failed and remain submerged today (Franks Tract was even used for used for bombing practice by the Navy in the 1930s). By the end of World War I, the majority of the Delta islands and tracts that exist today were completed.

The modern landscape of the Delta is a series of dry ‘pseudo-islands’ maintained by dikes rather than levees. Farming removed layers of topsoil over time, and with the addition of subsidence, many of the reclaimed areas are now far below sea level. So technically, the dry areas of the Delta are not islands due to their low elevation, and what used to be levees (structures that periodically hold back flood-level waters) are now actually dikes (structures that continually hold back water from low-lying land). These current low-lying areas are now not only farmland, but also commonly populated with houses, businesses, and other developments. Rising sea level as a result of global warming and the risk of seismic activity that could damage dikes pose significant threats to maintaining these dry areas into the future. The definition of ‘delta’ in mathematics is the ‘difference or change in a certain quantity,’ and our California Delta is certainly marked by significant change, both past and present. We will be focusing on the Delta in our Fish Reports for the next few weeks to learn about current issues and opportunities that will determine the future of this important ecosystem.