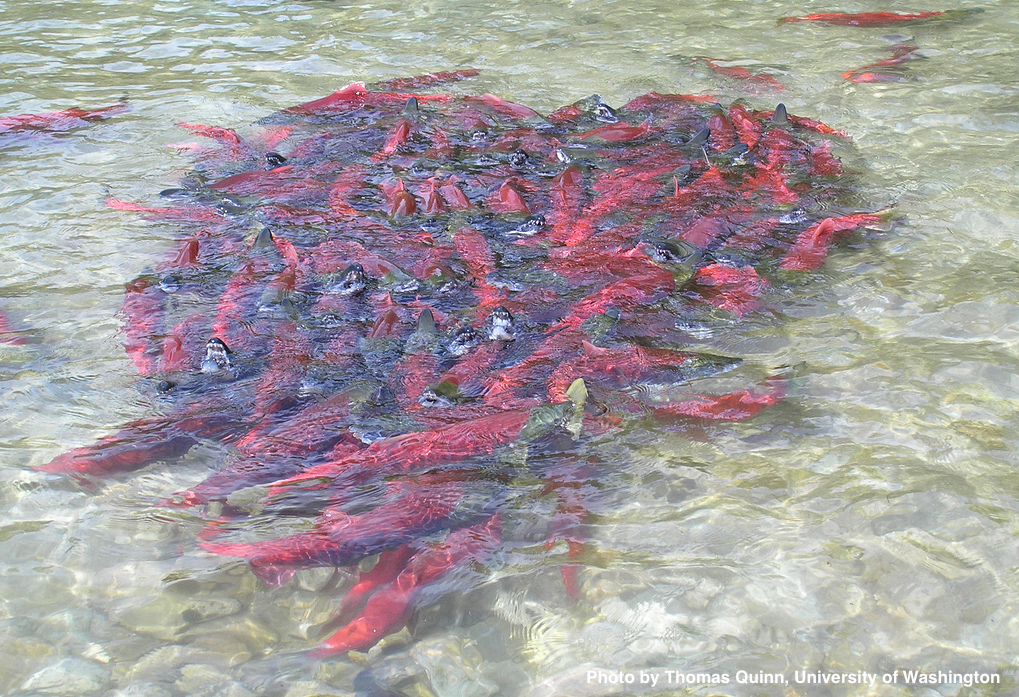 Research has shown that salmon, and indeed all organisms with complex life cycles that involve migration, are particularly sensitive to the effects of climate change, such as rising temperatures, fluctuating river flows, and changing ocean conditions. Many studies have focused on how these changes impact specific life stages, like juveniles or adults, but less on how these impacts translate from one life stage to the next. For example, if a trait like the amount of time a juvenile salmon spends in freshwater changes, how will this affect its subsequent maturation to adulthood in the ocean? Salmon fisheries often keep extensive records dating back many decades, so they provide an excellent model to investigate the impacts of a changing climate across each stage of a fish’s complex life cycle. To that end, a recent analysis drew upon sockeye salmon (Onchorhynchus nerka) fishery data from Bristol Bay, Alaska, dating back to 1963 (Cline et al. 2019). An examination of how sockeye partitioned their time between freshwater and the ocean revealed a troubling shift in age structure, which appears to have been driven by warming temperatures, changing ocean conditions, and increased competition.

The timing of salmon life-history stages (like hatching, migration, and spawning) have been driven by millions of years of evolution to coincide with favorable environmental conditions. A fish that migrates too soon may be thwarted by frozen rivers, and one that hatches too late might not have time to grow and migrate before winter arrives. A healthy population will exhibit a diversity of these strategies, which reduces the risk of an entire generation falling victim to one season of abnormal or poor conditions. In turn, this diversity enables a population to adapt to changing conditions, as individuals with more beneficial strategies are more likely to survive to reproduce. However, climate change is now another factor influencing which individuals in a population survive.

An average of 37.5 million sockeye salmon return to Bristol Bay each year, and this region supports half of the worldwide sockeye harvest. Southwest Alaska has experienced dramatic climate change over the past half century: ice-break up in lakes is occurring earlier in the spring, summer water temperatures are rising, and the growing season is lengthening. Using sockeye harvest data, the authors of this study looked at changes in the amount of time fish spent in freshwater and the ocean, and sought to relate these changes to warming temperatures, changing ocean conditions, competition in freshwater and the ocean, and the commercial fishery. Most rivers in the region saw an increase in the number of fish that spent only one year in freshwater, as well as an increase in fish that spent three years in the ocean. Over this same period of time, there were also changes in the patterns of ocean upwelling, temperatures, and productivity, as well as dramatic increases in competition among salmon resulting from a flood of hatchery-produced fish, which now account for an estimated 40% of Pacific salmon abundance. The increasing water temperatures in Bristol Bay lakes were found to be driving the shorter freshwater rearing periods, and this decreased time spent in freshwater contributed to increased time spent maturing in the ocean. In addition, returning sockeye harvested by the commercial fishery declined in size. This decline corresponded with an increase in the total biomass of salmon in the North Pacific, suggesting negative effects of competition from introducing hatchery fish.

Such changes have the potential to seriously impact this economically valuable and historically reliable commercial fishery, which presents challenges for management. One such challenge facing managers is that hatchery produced populations do not experience the normal checks and balances that wild populations experience. In the wild, a bad season or harsh conditions during spawning or rearing may reduce survival, but this also causes reduced competition. The introduction of hatchery fish, whose numbers are unaffected by those adverse conditions, may undermine this process by keeping competition in freshwater high every year. But while hatchery fish releases are possible to control with management, the changes in climate that are leading to shorter freshwater rearing periods and delays in ocean maturation are more difficult to address, and may reduce the diversity of sockeye life history. The future is certain to be uncertain, and a less diverse sockeye population may be less able to cope with these looming changes.