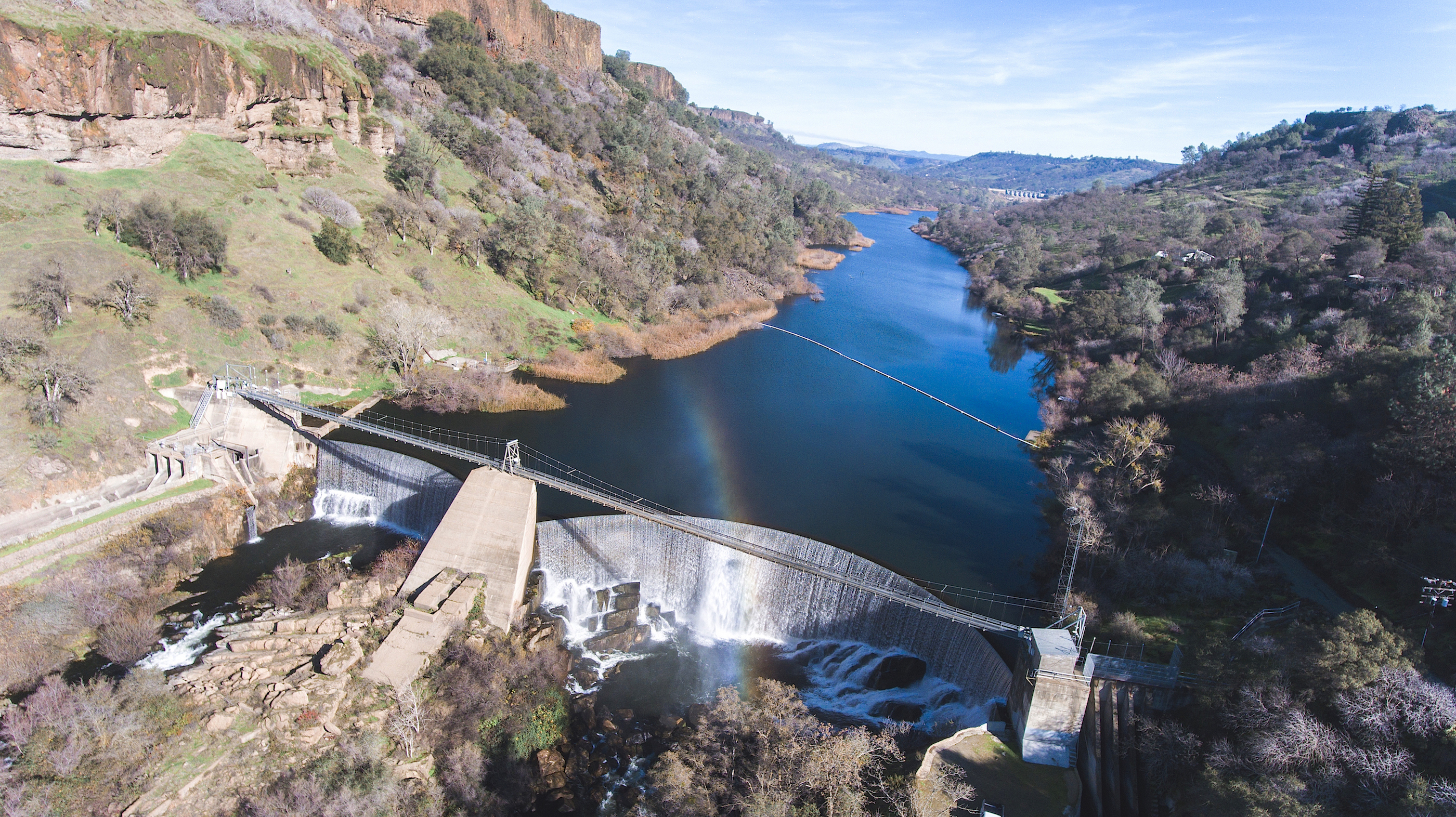 Many areas in California are still recovering from the previous weeks of torrential rainfall, caused by an atmospheric river. As large amounts of precipitation have swept across the western United States, storms have created extreme flooding, mudslides, and several power outages. While powerful atmospheric rivers can cause tremendous damage, they also supply an average of 30-50% of the annual precipitation experienced along the West Coast. California receives almost half of its yearly precipitation during just 5-10 days per year (Dettinger 2016). Due to such a high percentage of rain and snowfall over a short period of time, these storms can dictate whether or not California will remain in drought or have an above-average precipitation year. It appears that despite previous predictions, atmospheric rivers have brought enough precipitation to relieve most of California of its current extended drought.

The storm added 350 billion gallons of water to California reservoirs as of Jan.10. The storms’ impacts reached the Sierra Nevada mountains elevating its snow water content. The mountain range received its largest snowstorm in 6 years according to the National Weather Service in Reno. Currently snow water content in California is at >200% compared to its yearly average. Above-average snow water content ensures water supplies during the dry months, and reservoirs such as Trinity Lake depend on this runoff.

The recent storms have supplied precipitation levels high enough for multiple California reservoirs to open floodgates and release water, causing high flows on rivers in the Central Valley. October 2016 marked the new Water Year (WY), and many reservoirs are experiencing water levels much higher then predicted. Lake Oroville is currently at 81% capacity compared to 44% only months ago, McClure has risen from 35% to 73% capacity, and Don Pedro is at an astonishing 90% capacity from its previous 65% (Figure 1). 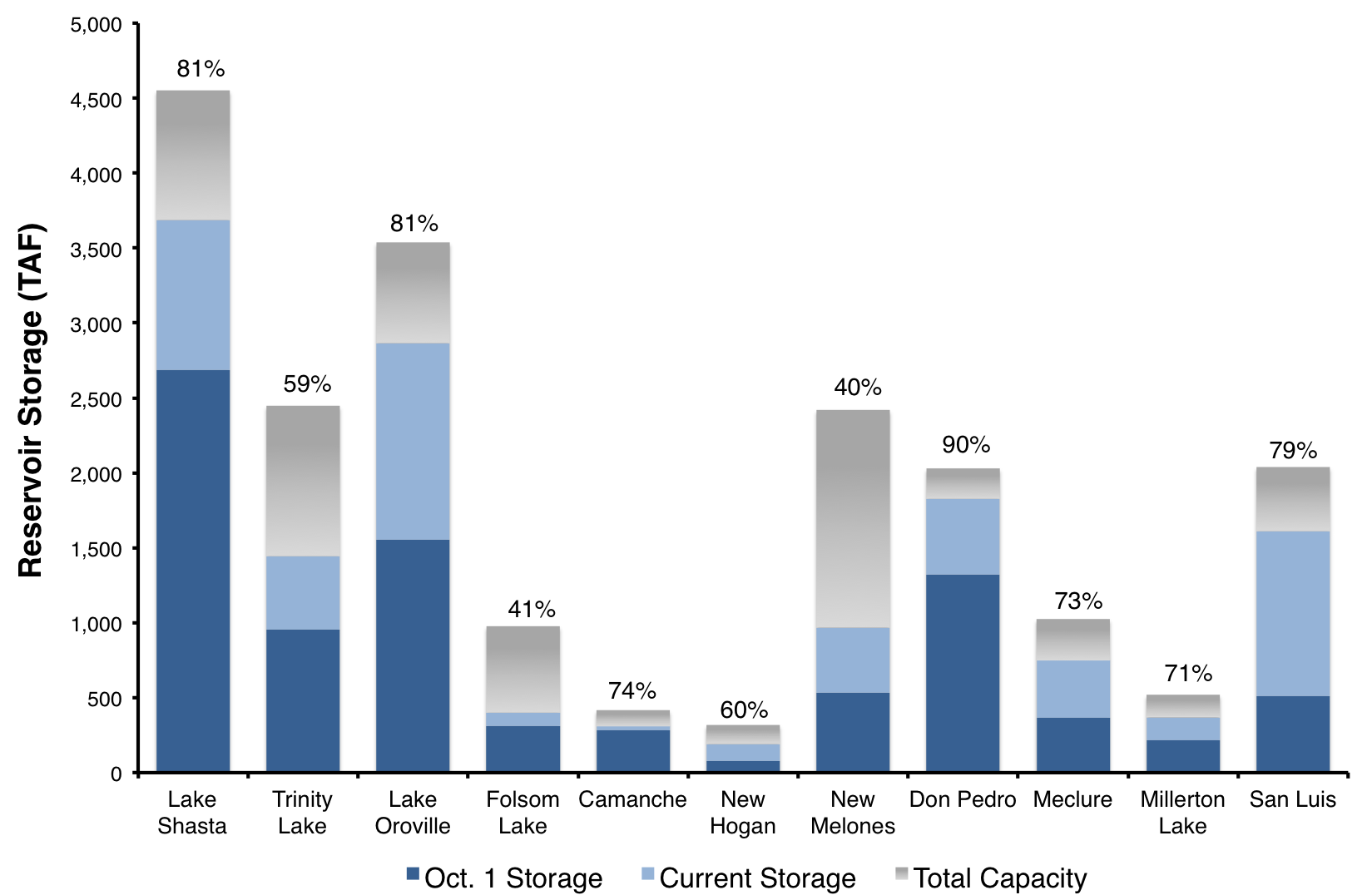 Historically, periods of prolonged drought in California have ended when statewide average precipitation was near 150%. Although there are areas still experiencing varying drought conditions, the recent storms have mitigated the extreme levels of drought in most of northern California. As of January 24th only 61.2% of California is experiencing a state of drought, compared to January 3rd when 82% where experiencing drought. In order for a statewide drought recovery, there will need to be multiple years of above-average precipitation for water storage to be replenished. Even with drought conditions improving, Southern California is still experiencing relatively low reservoir levels (Figure 2).

With California’s drought status relying closely on a small number of storms brought by atmospheric rivers each year, management for water shortage and flooding are more closely related then previously thought. Looking towards the future, new technologies and management of storm capture for groundwater basins would be useful as California continues to go through periods of extreme droughts. Groundwater supplies 30-60% of water used by Californians in a given year. Investing in better methods to capture storm water in these major storms will provide more water sources during multi-year droughts. While the current drought may finally be subsiding, it is important to focus on long-term water management, and plan for future periods of water scarcity.