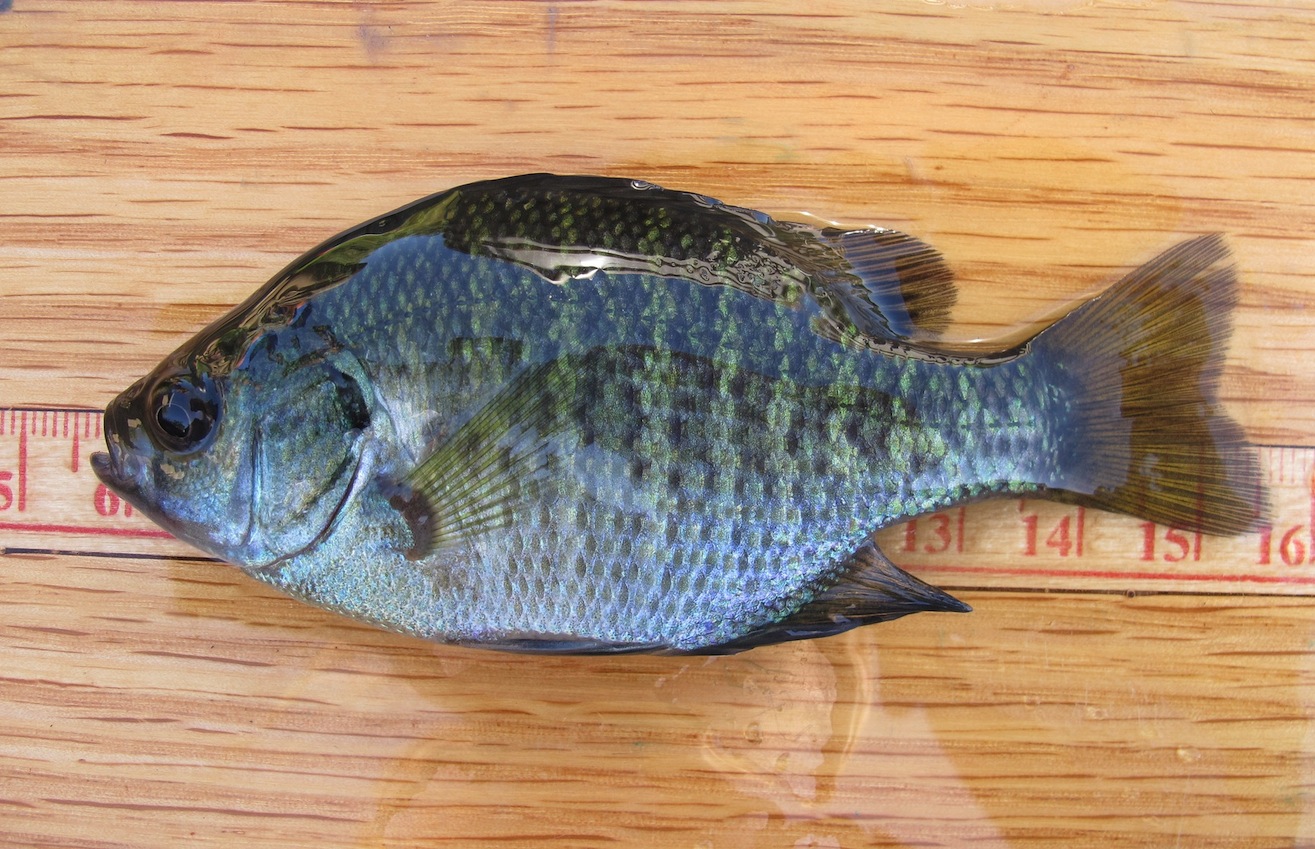 To round out our series on environmental DNA (eDNA), in which we’ve described the basic concepts of this technique in aquatic research, as well as its challenges and limitations, here we highlight some successful applications of eDNA methods in fisheries science. This emerging technology has been used to characterize the distribution of invasive or endangered fishes, to estimate fish biomass, and to determine species composition – all from traces of genetic material left in the water. For example, Takahara et al. (2013) used eDNA technology to test water from 70 ponds on multiple Japanese islands in a search for genetic evidence of the bluegill sunfish (shown above), an invasive species in Japan. By pairing this sampling with observational surveys, the authors confirmed the presence of sunfish DNA in all locations where they visually detected the fish, but also in a number of locations where the species eluded observation. These results illustrate that eDNA surveys can be a powerful tool to evaluate the often rapidly changing distribution of an invasive species, especially if the species is hard to spot visually. Obtaining such precise and up-to-date knowledge on the distribution of invasive species can help managers determine appropriate responses to limit further spread of the invader.

In a recent study, Laramie et al. (2014) showed that eDNA methods are also effective for estimating the distribution of threatened or endangered Chinook salmon. By collecting multiple water samples from 50 locations across two sub-basins of the Columbia River, the researchers were able to estimate a detection probability of nearly 80% (in places where salmon were present, the team successfully detected eDNA traces in 4 out of 5 samples), and found evidence that Chinook salmon inhabit a larger range in these basins than previously assumed. While this technique cannot replace other monitoring methods that provide numeric abundance estimates of fish populations, this study illustrates that eDNA methods can quickly assess a species’ distribution and identify which areas are actively used by species of conservation or management concern.

While eDNA methods cannot estimate the number of individuals in a population, the concentration of eDNA in the water likely reflects a species’ biomass (Takahara et al. 2012). In other words, assuming that a large individual releases more eDNA than a small one, and that many small individuals release more eDNA than just a few, the concentration of eDNA in the water can provide an indication of a fish species’ biomass. Following this reasoning, researchers have established a relationship between the number and biomass of carp, and their resulting eDNA concentrations in aquaria and ponds. After analyzing samples collected throughout a freshwater lagoon, the researchers found increased carp eDNA concentrations in areas with higher temperatures and concluded that the fish showed a behavioral preference for areas with warmer water in the lagoon. These findings suggest that eDNA methods could be used to monitor seasonal changes in fish distribution, and to identify habitat areas of particular importance to the target species.

In addition to “searching” the water for DNA evidence of a particular species, it is also possible to assess the overall composition of a fish community with eDNA. This approach has been successfully used in nearshore marine habitats (Thomsen et al. 2012), and allows scientists to detect more species than a combination of several traditional survey methods. As such, eDNA sampling is arguably a better fit for standardized fish community monitoring efforts than traditional methods, which face a number of limitations, such as shallow water or obstructions on the seabed (trawling), visibility (snorkeling/diving), size and species selectivity (most methods), and expert knowledge on fish species identification. Complimentary experiments indicate that eDNA degrades within just a few days in seawater, and is therefore unlikely to get transported over long distances, suggesting that eDNA provides an accurate snapshot of the local fish community. Clearly, knowing which species occur in a given environment is important to many aspects of fisheries and resource management, and eDNA methods now allow scientists to estimate the presence of species, native or invasive, more confidently than with traditional survey methods. These few examples are just a glimpse of the ecological insights that this technology can provide, and we look forward to following the developments of fish-related eDNA research in the near future.