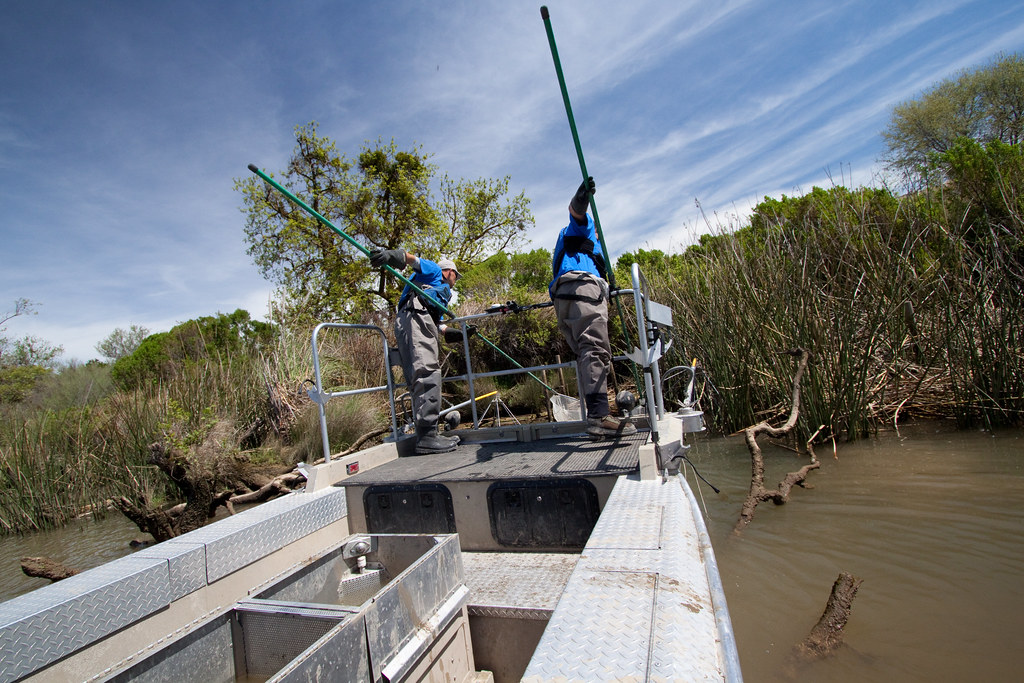 It’s no secret that most of California’s waterways have been extensively modified to safeguard valuable agricultural lands, public infrastructure, and private property. In the Sacramento Valley, the transformation from frequently flooded grasslands and marshes into farmlands and cities fortified by levees began in earnest about 100 years ago with the passage of the Flood Control Act. Now, about 1,000 miles of largely monotonous, riprapped levees shield the fertile valley floor from destructive flood waters, and constrain most of the large rivers to a relatively narrow riparian corridor. The majority of these levees were constructed with little or no consideration of their resulting impacts on fish populations. Levees reduce habitat complexity, which is hypothesized to hamper the recovery of already struggling salmonid populations. In light of this, efforts to maintain and repair ageing levees in recent years have incorporated enhancement features such as woody debris and gradually sloping banks to improve the value of this engineered shoreline for fishes, particularly juvenile salmonids. A large body of research indicates that nearshore habitat is of great importance to these fish; however, due to challenges associated with sampling and observing fish in large, often turbid rivers, the effects of bank modification on salmon fry and smolts remain poorly understood.

A multi-year project by the Army Corps of Engineers and FISHBIO sought to evaluate habitat use by juvenile Chinook salmon along the different shoreline types found along the lower Sacramento River between Knights Landing and the City of Sacramento. These included natural shorelines, riprap banks, and mitigated habitats designed to improve their value for fish. Researchers measured the habitat characteristics at specific points where fish were found and used this to determine which habitat features influenced occupancy by juvenile Chinook salmon. The findings of this research are highlighted in a new study published in the North American Journal of Fisheries Management. The study found that two measures of habitat use – average number of juvenile Chinook salmon found per sampling point, and the proportion of points occupied by salmon – were both significantly higher at shorelines with enhancement features (such as large woody debris) compared to riprapped banks, although slightly lower than along natural banks. A more detailed analysis of the measured habitat features indicated that juvenile Chinook salmon are more likely to be found over fine substrate, such as sand or silt, than over rocky bottoms, particularly along gently sloping banks where current velocity is slow. The research paper also suggests that density matters when it comes to cover – either in the form of wood or flooded terrestrial plants: while vegetation cover at low- and medium density significantly increased the probability of salmon using the habitat, high-density plants did not yield the same benefit.

As juvenile Chinook salmon migrate through the Sacramento River system toward the ocean, they encounter a patchwork of nearshore habitats of varying quality and, arguably, differing risks. Work in the Columbia River Basin has shown that introduced smallmouth bass, which can exert substantial predation pressure on juvenile salmon, are more likely to be found over rocky substrate. Although no quantitative estimate of the smallmouth bass population size is available for the Sacramento River, the species is abundant and supports a popular sport fishery in the study area. It is expected that smallmouth bass also contribute to mortality of juvenile salmon in the Sacramento River, and they may be more directly associated with particular habitat features than other predatory fishes like native Sacramento pikeminnow or introduced striped bass. These means trying to minimize habitat with rocky substrate (such as riprap) may not only enhance habitat value for juvenile salmon, but simultaneously reduce habitat favored by an introduced predator. While creating habitat modifications at levees may not be feasible everywhere, they might be one of the many pieces of the salmonid-reconciliation puzzle.