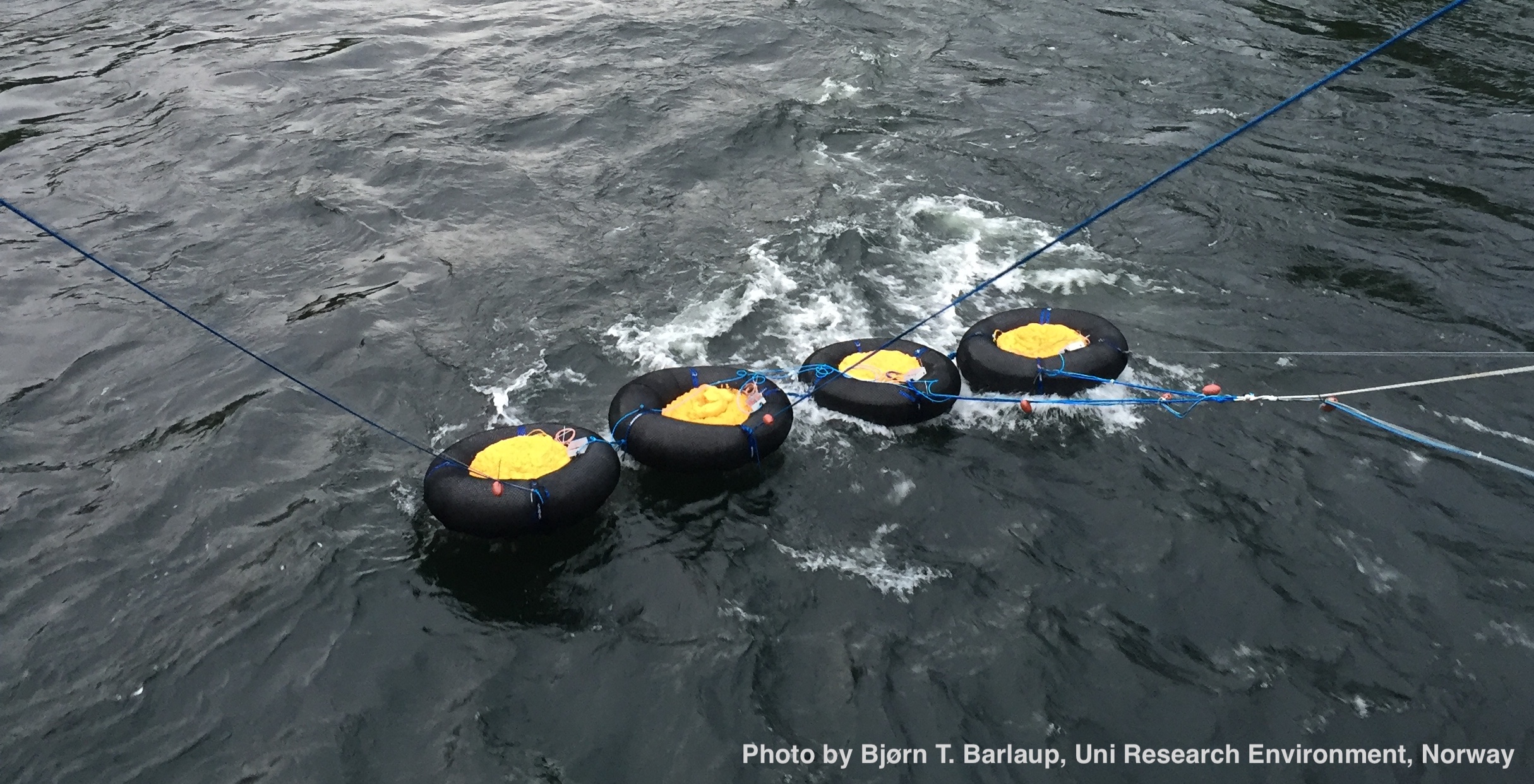 In the words of famous fisheries scientist John Sheperd, counting fish is just like counting trees, except that fish are invisible and keep moving.  This statement aptly summarizes one of the most difficult aspects of fisheries biology: knowing how many fish there are and when and where they are moving.  Addressing these questions is particularly important for species like salmon, which travel great distances into and out of rivers over the course of their lives. Fisheries scientists have developed numerous technologies to track fish movements, and they are continually seeking new, innovative ways to monitor these movements. The goal of a less invasive, more efficient monitoring system led scientists in Norway to develop and implement a new floating antenna array to detect passing salmon marked with Passive Integrated Transponder (PIT) tags. Traditional PIT antennae are mounted to the riverbed, but assessing large, complex rivers in which smolts migrate near the surface often means antenna mounted on the bottom of the river are difficult to place are and not very efficient at detecting tags in passing fish. The use of floating PIT antennae could allow for easier and more effective monitoring of migrating juvenile salmon, helping scientists and managers to better understand patterns in their movement.

The fjords and rivers of Norway are home to Atlantic salmon (Salmo salar), which like many salmonid species are born in freshwater streams and migrate to the ocean, where they live for several years before returning to rivers to spawn. One of the least invasive methods to study salmon movement is using PIT tags, which are transmitters implanted into fish that can identify an individual as it passes by a receiver antenna. The benefits of these tags include their very small size, the fact that they do not require a battery and can last indefinitely, and their inexpensive cost. One downside is their limited range, which means tagged fish must pass very close (within one to two meters) to a receiver to be detected. This requires constructing and maintaining extensive antenna networks secured to the riverbed or other structures, which can be damaged or dislodged in rivers with large increases in flow or quantities of debris. To address these challenges, the Norwegian scientists developed an array of floating PIT antennas to detect migrating juvenile Atlantic salmon. The setup consisted of four circular floating rings, each with an antenna beneath it, which were attached to a bridge and placed close together near the middle of the river. The antennas spanned 5 meters combined, or about 10 percent of the river width.  To determine how well the PIT tag receiver worked in comparison to traditional trapping methods, the team also installed a rotary screw trap 75 meters downstream of the antenna array, as well as two trap nets at the mouth of an estuary downstream. 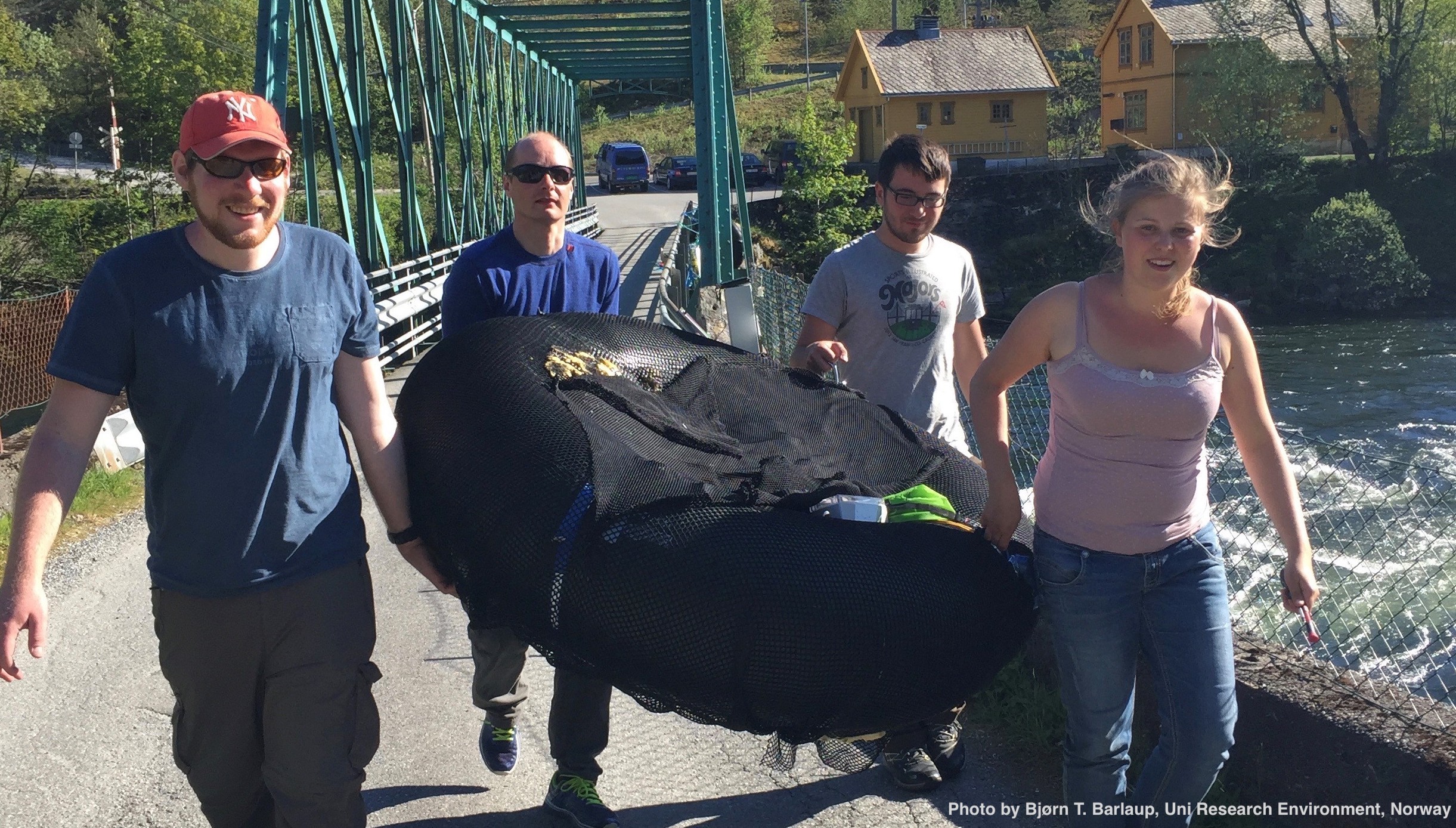 In total, 2,774 tagged smolts were released into the river, 1,200 of which were hatchery-reared and the other 1,574 of which were wild fish captured from the study watershed via electrofishing.  These tagged fish were released at different points in the watershed, both upstream and downstream of a large lake. In total, 132 wild and 50 hatchery-reared smolts were detected by the floating antennae on their migration to the estuary. This may seem like a relatively small percentage, but it still demonstrates that the antenna system is an efficient tool for evaluating the timing of migration for Atlantic salmon. The number of smolts detected by the antennae was actually 6.7 times higher than those caught in the screw trap and trap nets combined (Barlaup et al. 2018). The antennae were not expected to detect every passing fish because they only partially spanned the river. However, identifying which parts of the river the detected smolts came from (e.g., main stem river, tributaries, upstream of lakes, etc.) can help determine the contributions of different areas to the smolt migration. For example, fish released downstream of the lake were 52 percent more likely to be detected than fish released upstream, suggesting that fish migrating through the lake have a significantly higher risk of mortality. Additionally, the lower detection of hatchery-reared fish suggests that they have lower survival than their wild counterparts.

Although this new technology faces some challenges, such as debris in the river damaging the receivers, it may still prove a promising tool for studying migration behavior. Capturing and tagging wild juveniles every migration season may be time consuming but would still likely require less effort than installing and continuously monitoring rotary screw traps or trap nets. There is also much to be learned from monitoring the movements of hatchery-reared fish, which can be tagged quickly and efficiently. The researchers are continuing to develop this technology and would like to collaborate with others who are using or are interested in similar methods. Better understanding patterns of survival during migration can help managers effectively preserve and restore important habitats, and to adjust hatchery protocols to help more juvenile salmon successfully reach the ocean.