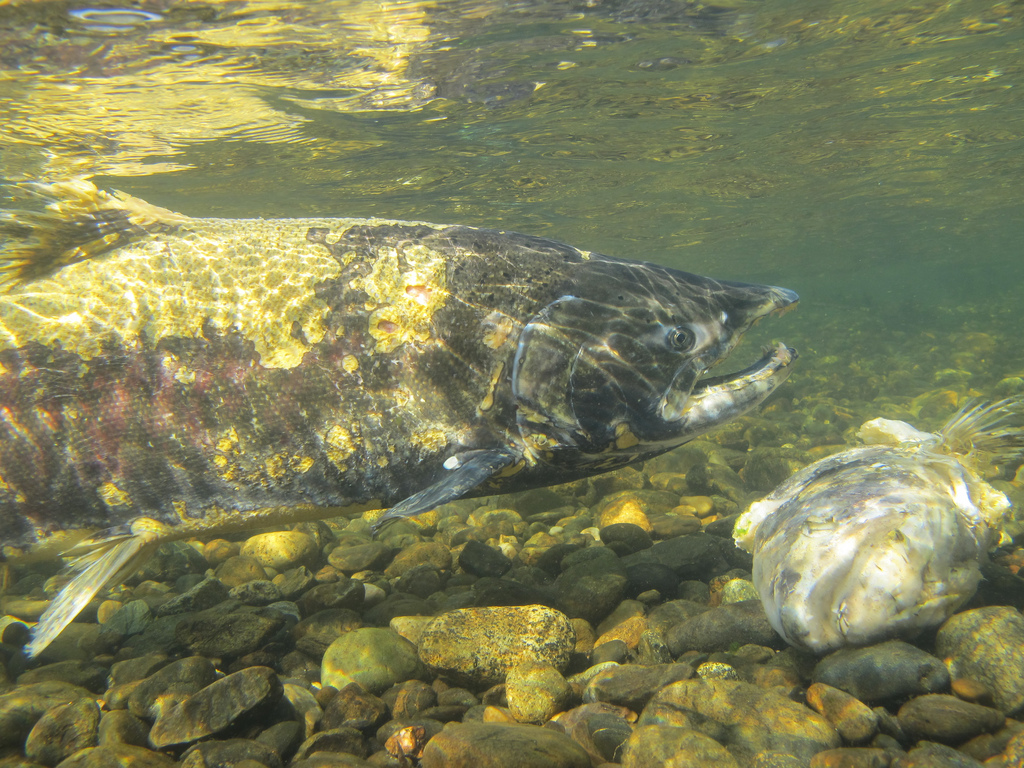 With the fall migration of Chinook salmon (Oncorhynchus tshawytscha) in full swing along the Pacific coast, students across the region are learning the classic salmon life cycle: fish are born in freshwater, migrate to saltwater, and return to freshwater to reproduce. This “anadromous” life history strategy that spans rivers and the ocean is almost the very definition of being a salmon. But some salmon actually bypass the middle, ocean-going phase entirely. For example, sockeye salmon (Oncorhynchus nerka) have a landlocked form, known as kokanee, that skip saltwater altogether. Instead of heading to the ocean, kokanee migrate to and grow up in lakes, before returning to rivers to spawn. Fisheries scientists describe this entirely freshwater life-history strategy as “adfluvial.”

Chinook salmon are also known to develop an adfluvial life history if they are introduced to areas where barriers block their migration to sea. Successful populations have been established in the Great Lakes; however this life-history form is more rare in the Pacific Northwest. Landlocked Chinook salmon have occasionally been documented in California, Washington, and Idaho (Romer and Monzyk 2014), but never in Oregon – until recently. Scientists from the Oregon Department of Fish and Wildlife published evidence for landlocked Chinook salmon successfully reproducing in Oregon in a recent issue of the North American Journal of Fisheries Management.

The biologists were prompted to conduct surveys upstream of Green Peter Dam, in Oregon’s Willamette River basin, after anglers reported catching Chinook salmon in the Green Peter Reservoir that looked wild. The fish didn’t have clipped adipose fins, indicating that they did not come from a hatchery. The biologists wondered how wild Chinook salmon could possibly get in to the reservoir. The dam entirely blocks passage from the ocean, and although hatchery-raised Chinook salmon had previously been released in the reservoir for fishing, the last hatchery releases occurred in 2008. Anglers were catching unclipped adult Chinook in 2012 and 2013, after most or all of the hatchery fish released in 2008 should have died.

To try to solve the mystery, the scientists conducted surveys to search for salmon nests, or redds, and also conducted snorkel surveys to look for live fish.  They spotted nine salmon redds in 2012, observed nine live salmon, and recovered six carcasses. Four of the carcasses had clipped adipose fins, indicating they came from a hatchery – but two had their adipose fins intact. When the scientists analyzed the earbones, or otoliths, of one of these unclipped fish, they showed no chemical evidence of the fish migrating to the ocean. The fish was a female that appeared to have successfully spawned.  The scientists conducted surveys again in 2013, after the last of the hatchery fish from 2008 should have died (it is rare for fish in this region to live more than 6 years). While they did not observe any salmon redds, they spotted one adult fish while snorkeling, as well as three juvenile Chinook salmon.

The scientists reported these collective findings as evidence that hatchery fish released upstream of the dam matured in the reservoir, then migrated to the river to spawn (Romer and Monzyk 2014). The fish with intact adipose fins and the juvenile fish observed in the 2012 and 2013 surveys are descendants of the hatchery fish, which have been successfully reproducing without access to the ocean. These findings illustrate that salmon can be remarkably adaptable or “plastic” in their life histories – able to adjust to make do with the conditions at hand. Based on the small numbers of fish identified, the scientists think it is unlikely for this population to sustain itself without additional releases of hatchery fish. Persistence of reproducing landlocked salmon could create challenges for resource managers attempting to recover wild populations in the basin, because the authors note that landlocked salmon are essentially identical in appearance to ocean-run fish. The remarkable adaptability of the Chinook salmon highlights its resilience, but also underscores the importance of thoughtful and considerate resource management to benefit the species without creating unintended consequences.