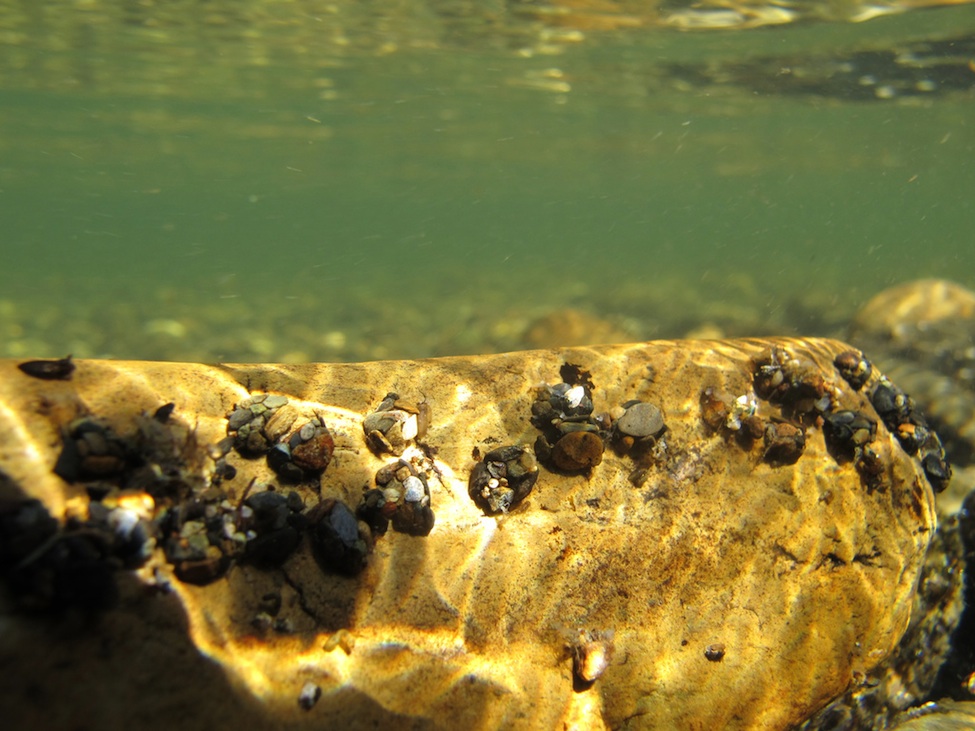 Dramatic rising and falling of water levels is a common experience for sea stars, mussels, and other marine invertebrates adapted to life on the rocky coast – but not so for insects living in rivers, at least historically. However, once a hydroelectric dam is built, a river’s flow no longer depends on the rhythm of the seasons, but is managed to accommodate the demand for electricity. In a paper recently published in the journal BioScience, a team lead by the United States Geologic Survey demonstrates that daily changes in river flow based on energy demand, known as hydropeaking, can wipe out some groups of aquatic insects, such as mayflies, that are accustomed to laying their eggs on surfaces near the river’s edge (Kennedy et al. 2016). However, the results also suggest that hydropeaking practices could be modified to help alleviate some of these negative impacts.

As part of hydropeaking, managers typically increase flows in regulated rivers during the day when energy demand is high, and decrease the amount of flow at night when demand subsides. Under this practice, water levels downstream of the dam can change by the hour, and the difference in water volume can be up to ten times in magnitude. The rising and falling of water levels creates an artificial intertidal zone along the river’s shore, where the vast majority of aquatic insects attach their eggs to rocks or other surfaces. An insect may lay its eggs on a promising underwater rock during the height of hydropeaking, only to have the eggs exposed to air and killed a few hours later when the water level drops. The study authors conducted experiments that revealed exposure to air for as little as one hour can profoundly affect the survival of aquatic insect larvae. They concluded that this loss of eggs creates a population bottleneck that affects the viability of streamside egg-laying insect species.

The scientists created a model to predict how aquatic invertebrate communities respond to hydropeaking scenarios. To test the model, they teamed up with citizen scientists to collect aquatic invertebrate data during rafting trips through the Grand Canyon stretch of the Colorado River. River guides and outreach groups such as Grand Canyon Youth collected more than 2,500 samples using fluorescent light traps between 2012 and 2014, which served as an enriching hands-on science experience for many young people, and provided information about a remote setting that would have been logistically challenging and expensive to sample otherwise. The data revealed that insects such as mayflies, caddisflies and stoneflies, which lay their eggs on rocks at the river’s edge, are virtually absent from the Grand Canyon, which experiences hydropeaking from Glen Canyon Dam – thus confirming the model’s predictions. In contrast, the few insects that lay eggs in open water, such as blackflies (Simulium arcticum), are mostly unaffected by hydropeaking.

The scientists also tested their model by examining the intensity of hydropeaking at 16 large, dammed rivers across the Western United States. They found that rivers with greater variation in the volumes of discharged water were also home to fewer types of aquatic invertebrates. However, the model does indicate that a diverse assemblage of aquatic insects can still exist in a managed river, as long as the size of the artificial tides created by hydropeaking is not too large. Invertebrates play a crucial role in providing food for fishes and other iconic river species, and are important indicators of river health. This paper can provide guidance for managers trying to create flow regimes that mimic characteristics of natural rivers, and indicates that reducing hydropeaking during crucial egg-laying periods for aquatic insects could benefit river communities. The authors suggest that on weekends, when hydropeaking garners less money, flows could be maintained at consistent low levels to provide insects a chance to lay eggs unperturbed by sudden water level drops.