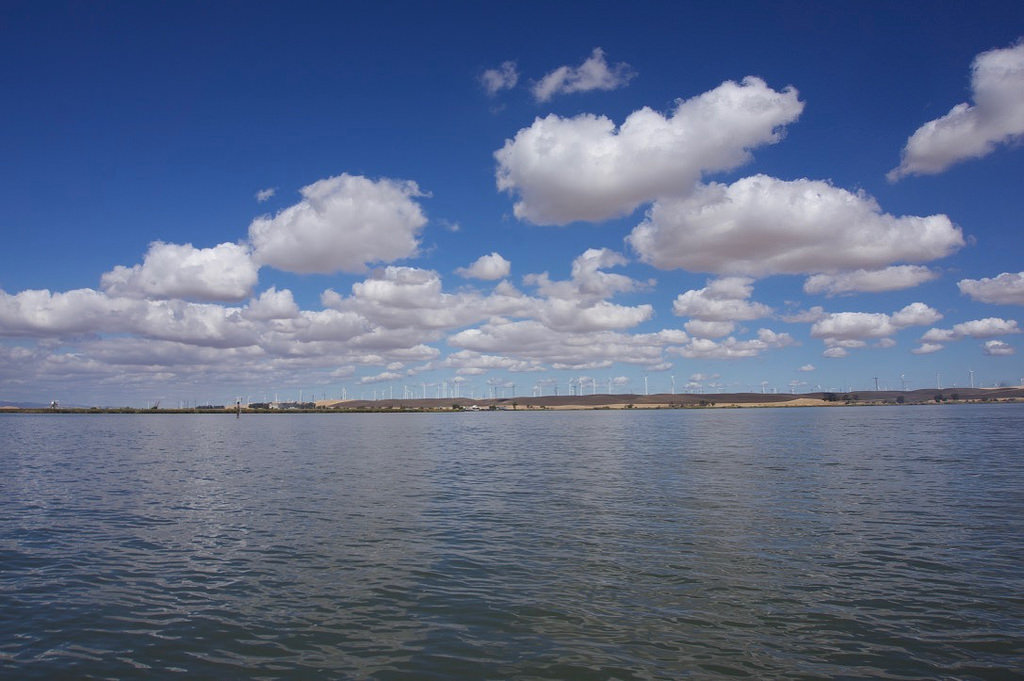 Climate change is affecting the environment in many ways, including raising sea levels, increasing ocean temperatures and acidification, and increasing air temperatures. But less well known is that it is also reducing average global wind speed – a worldwide phenomenon with consequences for the turbidity of the San Francisco Bay Estuary, and fishes that depend on its muddy waters. A recent review of historical climate data found a number of wind-related changes: jet streams have risen in altitude and shifted poleward in both hemispheres, and the average annual wind speeds appear to have slowed in the western and southwestern United States, as well as along the Atlantic seaboard. Further, most models agreed that wind speed has generally decreased in the northern half of North America, part of Mexico, and the Caribbean during summer months. A recognized mechanism for these slowing winds is that as the poles warm faster than the equator, the smaller global temperature differential reduces the creation of cooling winds. Some estimates show that global wind speeds have decreased approximately 5 to 15 percent over the last three decades.

One observed consequence of this reduction in wind speed is a decline in turbidity throughout the San Francisco Bay Estuary, because slower winds stir up less sediment in the water. A recent study by Bever et al. (2018) analyzed hourly wind speed data from 1995-2015 and found declines of 12 to 48 percent around the estuary. These declines were estimated to decrease turbidity by 14 to 55 percent between October and January. This is troubling because wind speed over the estuary is already relatively low during the late fall and winter, with an increase during the spring and summer. The reduction of turbidity within Suisun Bay is particularly concerning as it has been historically considered quality habitat for the delta smelt (Hypomesus transpacificus) when salinity is low and turbidity is high (Bennet 2005).

Multiple studies have found that turbidity appears to be a significant environmental factor influencing the health and distribution of delta smelt. The absence of delta smelt in the south Delta has been attributed to poor habitat conditions, particularly decreasing turbidity caused by reduced sediment inputs and the filtering effects of expanding beds of submerged aquatic vegetation (Sommer et al. 2007). Increased water clarity in the San Joaquin region may have constricted quality delta smelt habitat, and could be a major reason for the species’ absence in the region during the summer (Nobriga et al. 2008). Further, a study conducted by Kimmerer et al. (2013) suggests that turbidity, which often includes bugs and plankton to eat, contributes to the feeding success of many pelagic species in the Delta, and water clarity has been observed to reduce the delta smelt’s ability to acquire food (Moyle et al. 2015). This is supported by laboratory studies that concluded larval delta smelt require turbidity for successful feeding (Brown et al. 2013). Predation on delta smelt also appears to be exacerbated by clearer water as Nobriga et al. (2008) suggests that many of the Delta’s non-native predators (striped and largemouth bass, sunfish, etc.) have shown a preference for clear waters.

A decline in turbidity and suspended sediments is also a point of concern for an estuary that has been struggling with erosion in shallow areas since the 1950s (McKee et al. 2005). Climatic changes combined with impoundments trapping sediment behind numerous dams has led to a phenomenon known as “hungry water,” in which stream flow becomes sediment-starved and more prone to erode the streambed and banks, produce channel incision, and coarsen streambed materials (Kondolf 1997). With climatic changes that have contributed to clearer waters expected to increase into the future, the negative effects on native species that use the turbid waters of the delta and estuary are expected to continue as well. Recovery actions to help species such as the highly endangered delta smelt will likely need to address declining turbidity in their critical habitat, lest they face a more muddied future.