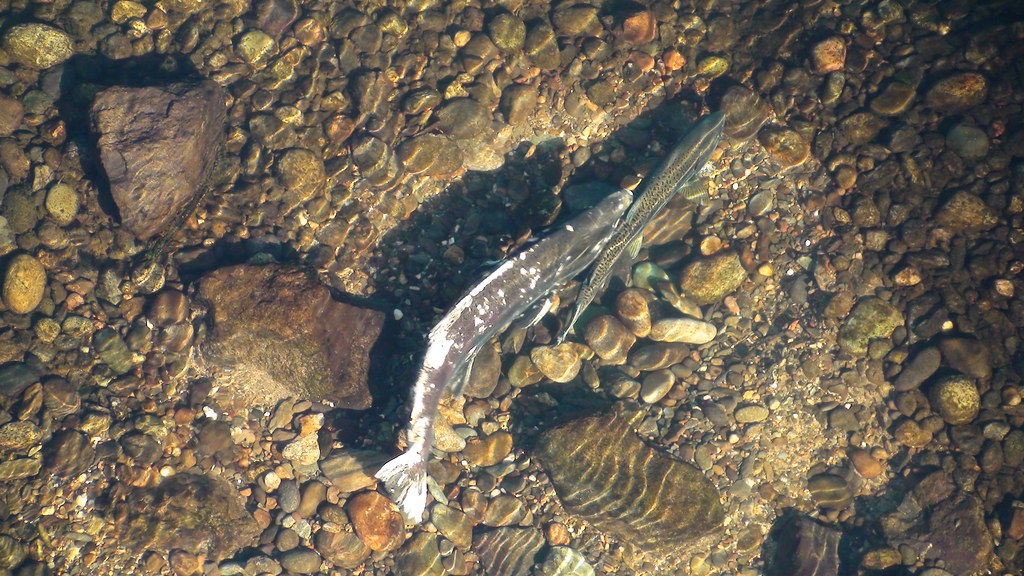 Keeping tabs on salmon spawning is important for tracking the health of a population, but can present challenges when multiple species spawn in the same location at the same time. Salmon and trout build nests called redds to lay their eggs in the gravel of rivers and streams, and biologists survey these redds several times throughout the spawning season to estimate population sizes and gather environmental information. Inaccuracies can result if a surveyor fails to spot a redd or misidentifies which species created it (Muhlfeld et al. 2006), and it can be difficult to visually distinguish between the redds of different species. However, researchers may one day be able to identify the owner of a redd by analyzing traces of DNA that fish leave in the water, also known as environmental DNA (eDNA). Since its first aquatic uses in 2008 (Ficetola et al. 2008), eDNA has been successfully applied in several aspects of fisheries research, from predicting the invasion of nonnative fish (Mahon et al. 2013), to showing predation by nonnative fish on native species (Ehlo et al. 2017), as well as determining abundance of rare fish species (Barnes and Turner 2015). A paper published earlier this year in the North American Journal of Fisheries Management explores using eDNA in redd surveys to distinguish between the nests of Chinook and coho salmon, marking a first step towards an eDNA-based redd identification technique (Strobel et al. 2017).

Living creatures leave behind DNA everywhere they go as dead cells slough off their bodies. Advancements in DNA sequencing and data computing technology now make it possible to collect these traces of DNA and quickly determine which species the genetic material came from. A small sample of water, air, or soil is collected in the environment, and DNA is extracted from the sample and matched to a databased sequence from the species of interest. Researchers used this technique in the Sandy River basin, a tributary to the Columbia River in northern Oregon, where both Chinook and coho salmon spawn during the same time period. To test the validity of the eDNA technique, the scientists only sampled redds that they could confidently identify to species, then checked to see if the eDNA tests correctly matched the species that built the redd. They used syringes to collect water from within the crevices between the gravel of recently constructed redds, and extracted eDNA for analysis.

Their results show that it can be possible to determine which species deposited a redd, even when the DNA from more than one species is present (Strobel et al. 2017). The eDNA from the species that built a redd was more concentrated within the gravel than in the surrounding column, and was higher in concentration than the eDNA of other species. However, the researchers say that several uncertainties need to be worked out before this technique could be used reliably, such as addressing the large amount of variation among their samples. eDNA concentrations also fluctuate between streams and between times of the year, so biologists still need to determine a threshold for positively identifying a redd and assigning it to a particular species, or determine if a comparing eDNA concentrations inside a redd vs. undisturbed gravel nearby would be more accurate. Although traditional surveys are still needed to locate redds, eDNA analysis might make the surveys more accurate or could even replace some traditional sampling methods in the future (Barnes and Turner 2015). Until then, we will continue to rely on highly experienced biologists to use location, timing, and a variety of other environmental characteristics to identify the species responsible for a particular redd.