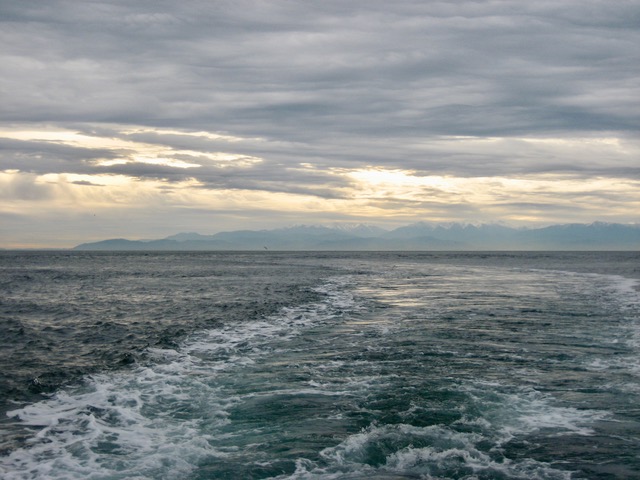 Melting glaciers, drought-stricken deserts, and catastrophic wildfires may have become the face of climate change, but one significant consequence of a changing climate has remained more invisible: ocean acidification. Oceans absorb nearly a third of the carbon dioxide that is released into the atmosphere, which has begun to make seawater more acidic – like carbonation does to soda. Since the industrial revolution began some 200 years ago, the increased burning of fossil fuels has contributed to a 30% increase in the acidity of water in our oceans. This acidification has a suite of negative effects on important marine life, from interfering with the development of organisms that grow shells or external skeletons (such as corals, mollusks, and plankton), to affecting the hearing, vision, and brain function of various fish species. Because they bridge the gap between salt and freshwater, salmon are particularly susceptible to the effects of climate change. A team of researchers from Washington state recently studied the effects of acidification on salmon’s sense of smell, also known as “olfaction,” which is particularly important for salmon to navigate back to their home streams to spawn. The scientists made the alarming discovery that at the pH levels (a measure of acidity) of seawater predicted to occur in the next 50 to 100 years, salmon’s sense of smell may be significantly imparied (Williams et al. 2018).

Salmon are remarkably adaptable, and can impressively change their physiology to switch from living in freshwater to saltwater. However, the increasing acidity of the marine environment represents a new challenge, and their ability to cope is not well understood. To address this knowledge gap, the recent study exposed ocean-adapted coho salmon (Oncorhyncus kisutch) smolts to three levels of carbon dioxide dissolved in seawater: 1) present-day levels in the Puget Sound, 2) levels predicted to occur in 50 years, and 3) levels predicted to occur in 100 years. The corresponding pH values for these carbon dioxide levels were 7.8, 7.5, and 7.2, respectively (lower levels are more acidic). The researchers studied the effects of these varying pH levels with a suite of behavioral, neurological, and genetic assessments. The behavioral component involved placing the smolts in a two-armed maze, and introducing salmon skin extract (a compound that live salmon are known to avoid). In a separate test, the smolts’ neurological response to the skin compound was measured using electrodes. Finally, a measure of gene expression was used to assess the genetic effects of heightened carbon dioxide exposure.

Each of the three assessments demonstrated clear differences among the smolts exposed to different amounts of carbon dioxide. Fish exposed to high carbon dioxide levels demonstrated significant impairment in their smell response behavior. Smolts exposed to low carbon dioxide levels avoided the side of the maze where the salmon skin extract was placed, whereas those exposed to both medium and high levels did not show a preference for either side of the maze. This suggests that fish under high carbon dioxide conditions might not be able to use olfactory cues to avoid predators. The neurophysiology tests also demonstrated significant differences in odor-induced neural signalling between the fish exposed to high carbon dioxide levels and those exposed to low levels. Although the implications are less clear-cut, there were also significant changes in gene expression following exposure to high carbon dioxide levels, including many genes that are involved in neural signalling. The results of this study demonstrate that salmon, despite their exceptional adaptability, are still susceptible to the effects of rising carbon dioxide levels and declining ocean pH. The effects may not just diminish their ability to avoid predators, but could also impair their homing ability to find spawning sites, as has been shown to occur in other marine fish species. Although 100-year projections may seem a long-way off, at certain times and locations the water in Puget Sound already exhibits pH levels as low as those used in this study. Declining ocean pH is just one of many challenges facing Pacific salmon, but should not be overlooked when trying to understand and improve their survival.