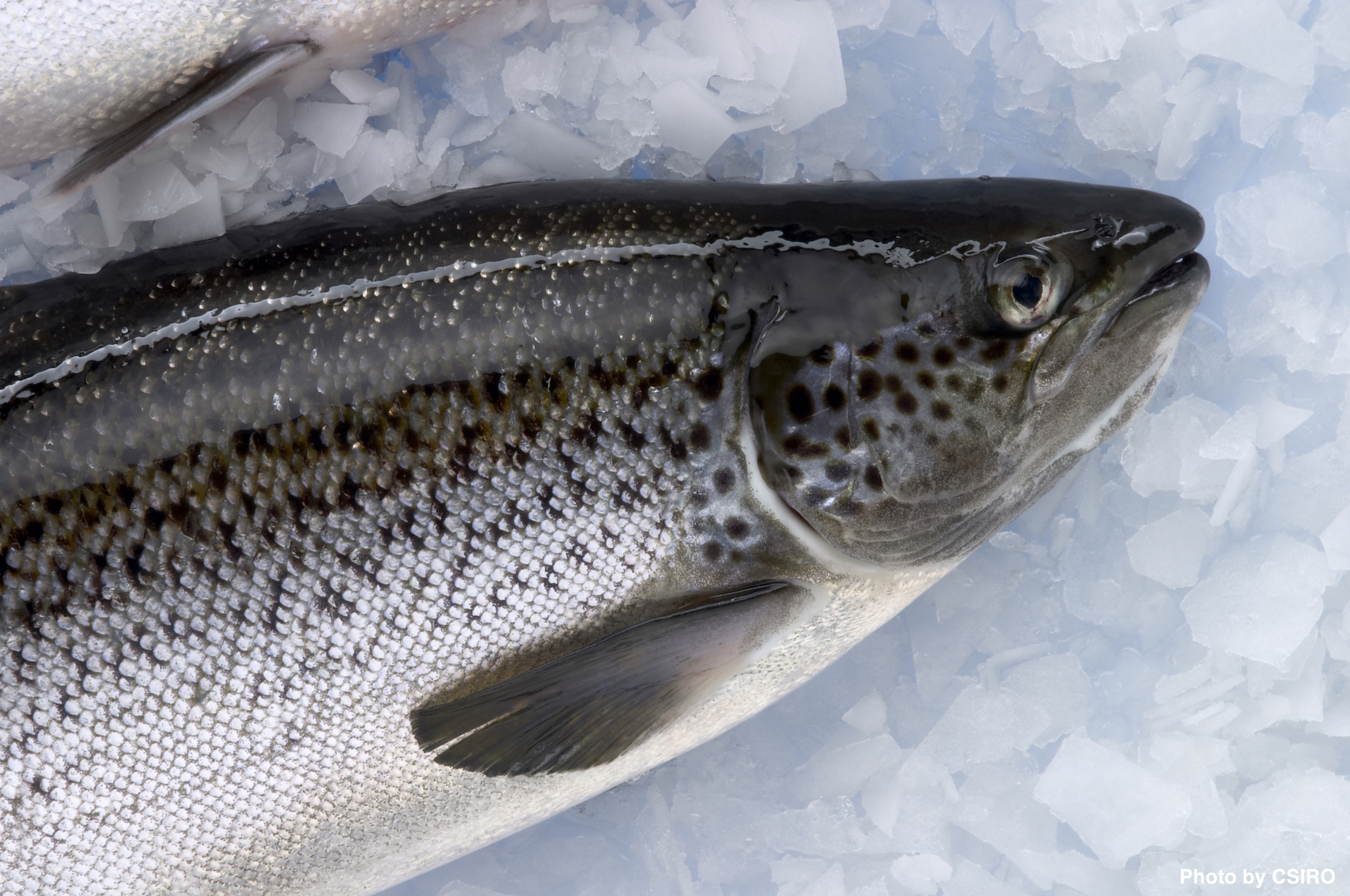 Although separated by a continent, Pacific salmon (Oncorhynchus species) and Atlantic salmon (Salmo salar) face many of the same pressures and challenges from human activity, including overfishing, dams, and climate change. However, one specific factor threatens Atlantic salmon but not their West-Coast cousins: interbreeding with farmed salmon. While Atlantic salmon have been farmed in net pens on the West Coast for about three decades (a practice that may soon come to an end), it is not possible for Pacific species like Chinook (O. tshawytsha) to interbreed with these interlopers (although escaped farmed fish can still spread disease or compete with native salmon). In contrast, wild Atlantic salmon on the East Coast face the additional risk of having the genes of farmed fish intermix in their populations. In fact, escapees from salmon farms outnumber wild individuals in many Atlantic salmon populations, and this continuous infusion of genes from escaped domestic, or “feral,” fish may reduce the evolutionary fitness (overall survival and reproduction) of the already imperiled wild populations. The potential impacts of this interbreeding and the prospects for recovery following invasion events are not well understood, but a recent study made the best of a bad situation by using a large escape event as a case study. By monitoring Atlantic salmon populations for several years following the escape, researchers were able to better predict how populations may respond to this ongoing phenomenon (Sylvester et al. 2018).

In September of 2013, 20,000 Atlantic salmon escaped off the southern coast of Newfoundland when a net pen was submerged by high currents. This region hosted a wild population of approximately the same size, and studies demonstrated that this invasion resulted in extensive interbreeding between the escapees and wild fish. Both ferals and hybrids are known to have worse survival than “pure” wild individuals, but the extent of this difference is generally unknown. Complicating things further, the amount of hybridization and the survival of hybrids varies widely even across small areas. But fisheries scientists have molecular tools that can paint a clearer picture of what is occurring at the genetic level. For this study, researchers monitored changes in the proportion of hybrid and farmed fish over time by analyzing a set of single-nucleotide polymorphisms (SNPs), which are small variations found throughout the genome. Over the three years after the escape event, they collected DNA from more than 4,000 salmon across the region. Based on variation in SNPs, fish were categorized as pure wild, feral, first generation hybrids, second generation hybrids (hybrid X hybrid cross), backcross wild (wild X hybrid cross), or backcross feral (hybrid X feral cross). Examining changes in the proportions of each of these categories over time allowed the team to study how domestic genes fare in the population.

Changes in the abundance of hybrids indicated that during their first year of life, the survival rate of feral fish was 85% lower than that of pure wild fish, and survival of first generation hybrids was 19% lower. The researchers incorporated these data into a model to evaluate survival scenarios over different time frames and found that the response of a population to an invasion could vary widely, suggesting that accurate predictions hinge on having good estimates of survival. Unsurprisingly, all of the models predicted substantial declines in the abundance of wild individuals if large escape events continue to occur. However, this trend became much more severe when feral fish had higher survivorship or if the intensity of invasions increased. Although feral and hybrid fish declined over the years following an escape event, second-generation hybrids were still detected each year, and the presence of these individuals indicates that a low level of invasion was still occurring as escapees continued to trickle into the system and produce hybrids.

There are many potential complicating factors that may affect how a salmon population is affected by an invasion of farmed fish, such as pressure from fisheries, the introduction of diseases, and fluctuations in river flow. However, this assessment provides valuable insight into factors that influence the severity and duration of an invasion. This risk of genetic pollution is likely to be an ongoing problem for wild salmon in Atlantic waters, but their Pacific relatives may not be completely safe either. Although Pacific species can’t interbreed with escaped Atlantic salmon, the billions of hatchery-produced fish introduced into West Coast waters may have a similar impact. Just like fish raised in farms, hatchery fish have lower fitness than wild individuals, and their interbreeding with wild fish has the potential to reduce the fitness of wild populations. On top of numerous other challenges in a changing world, wild salmon have to contend with a dating scene rife with bad matches.