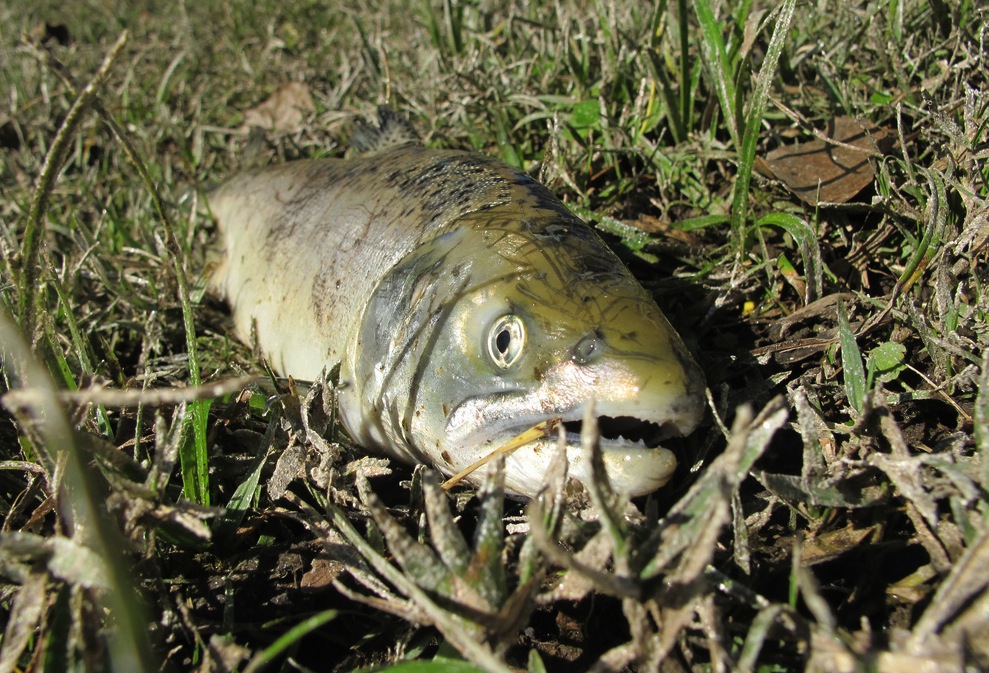 Early-maturing Chinook salmon males, called jacks, have featured prominently in our updates over the past few years. We’ve observed jacks attempting to mate with larger adult females on field surveys; have pondered their life history patterns (see “Hedging Your Bets…” and “Jumping Jack“); and have discussed how the number of returning jacks in a given year is used to forecast the number of adult Chinook that should return the following year. Recently, a news article from the Columbia Basin Bulletin on the subject of jacks caught our attention. The article focused on a research paper published earlier this year in the Transactions of the American Fisheries Society, which investigated the high frequency of extremely early maturing males, called “minijacks,” among hatchery spring- and summer-run Chinook in the Columbia River basin. The abundance of these precocious males, which can be as great as 71 percent of salmon released, could decrease the overall reproductive success of Chinook salmon in the basin.

In the Columbia River, “minijacks” are generally males that mature at age 2, while “jacks” are defined as age-3 males. Although minijacks can occur in naturally reproducing Chinook populations, they are thought to occur much more frequently in hatchery programs. All of the hatchery programs in the study reared spring- and summer-run Chinook for nearly 18 months before release; therefore, the fish are released as “yearlings.” Two distinct hatchery programs are operated in the Columbia River. The first is an “integrated” program that aims to minimize the genetic difference between hatchery and naturally reproducing populations, while the second is a “segregated” program whose goal is to develop and manage a hatchery broodstock that is genetically distinct or segregated from the naturally-spawning population.

The study by the National Marine Fisheries Service included 11 years of data on Chinook smolts from nine spring-run and five summer-run Chinook hatchery programs from around the Columbia River basin. The researchers tested the blood plasma of Chinook smolts for a hormone called 11-Ketotestosterone, which indicates the fish has begun to mature. Fish with elevated levels of the hormone were deemed minijacks because they were destined to mature and return to spawn the same year they were released. An examination of nearly 19,000 Chinook smolts identified minijacks in every hatchery program and in all years of data collection. The prevalence of minijacks among spring-run Chinook ranged from 7.9 percent to a whopping 71.4 percent across all hatcheries, while the prevalence of summer-run Chinook minijacks ranged from 4.1 percent to 40.1 percent of fish released. A higher prevalence of minijacks was associated with larger sizes of salmon at the time of release from the hatchery, as well as the type of hatchery program. The overall minijack rate was nearly double in integrated hatchery programs compared to segregated hatchery programs (42.1 percent versus 21.8 percent).

The study’s authors noted that the high frequency of minijacks in hatchery populations could lead to a significant loss of adult salmon production because the reproductive success of minijacks is extremely low. Based on the numbers of hatchery salmon released each year and the frequencies of minijacks observed in this study, the researchers estimated that nearly 4 million minijacks have been released into the Columbia River system each year between 2003 and 2012! Conceivably, had those fish followed the standard maturation schedule and developed into jacks or adults, they would have produced more offspring to contribute to recreational and commercial fisheries or produce offspring of their own.