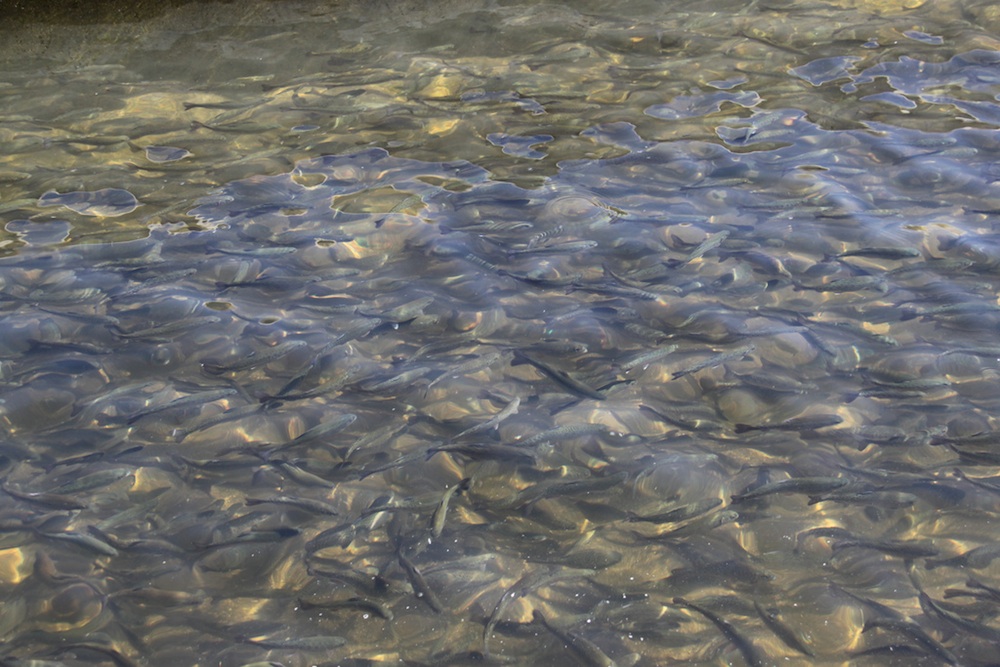 California has a long and intricate history of using hatcheries to supplement its salmon fisheries, starting with the first federal fish hatchery constructed along the McCloud River in 1872. In following decades, continued development from the Gold Rush and the expansion of agriculture took a toll on wild salmon and increased reliance on hatcheries. Technological improvements in the early 20th century, such as the invention of motorized boats capable of open-sea trolling, increased fishing efficiency and effort, but the higher fish catches masked wild salmon population declines (McEvoy 1986). When large dams were constructed during the mid 20th century for the Central Valley and State Water Projects, more salmon hatcheries were built to mitigate for lost spawning habitat upstream of the dams, which posed barriers to salmon migration. Reliance on hatchery supplementation intensified after World War II to support a burgeoning human population in California.

Fast-forward to current times: the best-available data indicate that California’s commercial and recreational salmon fisheries are overwhelmingly dominated of artificially-produced fall-run Chinook salmon (Barnett-Johnson et al. 2007, Kormos et al. 2012, Palmer-Zwahlen and Kormos 2013, Palmer-Zwahlen and Kormos 2015). These fish are propagated at five hatcheries located in the Central Valley: the Coleman National Fish Hatchery on Battle Creek; the Nimbus Fish Hatchery on the American River; and the Feather, Mokelumne, and Merced River Fish Hatcheries. This artificial production system has revealed its pitfalls. Beginning in 2007, the Central Valley fall-run Chinook salmon population suffered a large-scale collapse (Lindley et al. 2009), which resulted in an emergency closure of the commercial and recreational fisheries from 2008-2009 and limited fishing in 2010. It was the first such closure in the fishery’s more-than-100-year history, and lead to a devastating loss of an estimated 5,000 to 23,000 jobs and a loss of $500 million to $2 billion dollars to California’s economy (Schwarzeneggar 2008, 2009, State of California 2010).

The U.S. Congress allocated $170 million in disaster relief funds to West Coast states to ease the negative economic impact of the salmon fishery collapse and closure. A portion of the funds was used to create the California Hatchery Scientific Review Group (CAHSRG) in 2010, which was tasked with compiling information about state-wide hatchery operations and objectives (see In Search Of Hatchery Solutions). Among the review’s major recommendations for Central Valley hatcheries were to:

1. Define hatchery production goals in terms of the number of salmon that survive to age 3 in the ocean just prior to harvest, instead of setting goals based on the number of juvenile salmon released;
2. Cease transporting and releasing juvenile salmon outside their river basin of origin;
3. Improve monitoring and evaluation of hatchery operations; and
4. Improve coordination of operations among hatcheries (CAHSRG 2012).

In order to achieve these goals, scientists, managers, fishers, and advocacy groups need basic information that can be shared among various stakeholders to improve salmon stewardship. However, until recently, basic hatchery information about the total number of fish released, sizes at release, and release locations were not available in a standardized database format. Instead, these data were buried in a multitude of annual reports shelved in various state agency offices. This compelled researchers at UC Berkeley’s Department of Environmental, Science, Policy, and Management to obtain funds to formulate a comprehensive computer database containing these relevant hatchery release records. The team recently published the database, along with analyses of trends in hatchery release timing from 1946-2012, in the online journal San Francisco Estuary and Watershed Science (Huber and Carlson 2015).

Among the team’s major findings are that approximately 2 billion Central Valley fall run Chinook salmon have been released in total from California’s hatcheries over time. Beginning in the 1980s, juveniles have been increasingly released outside the freshwater environment altogether, and were instead trucked and released directly in the San Francisco Estuary so they could circumvent the poor water quality and predators in Central Valley rivers. As a result of technological improvements and, possibly, human preferences to spawn the largest and fastest growing fish, salmon are growing to larger sizes faster in the hatchery environment, which has resulted in a new life-history type (springtime releases of “advanced smolts”). These large, young fish did not exist earlier in the time series, but they now dominate the type of fish released from state-operated hatcheries.

Another marked change in hatchery practices occurred around year 2000, when fish began to be stocked at similar sizes in similar locations at similar times of year. Much like ill-advised financial portfolio management, this loss of life history diversity (similar to “assets”) likely increased fish mortality risk (“investment risk”) over time, and this reduced the population’s resiliency to environmental volatility (“market volatility”) and resulted in increased population fluctuations (“financial instability”). While the proximate cause of the fishery collapse in the late 2000s has been attributed to poor feeding conditions for young salmon in the ocean, (Lindley et al. 2009), placing “all the eggs in one basket” by releasing millions of fish with the same life history may have also contributed to the collapse (Hilborn et al. 2003). With long overdue, detailed hatchery information now freely available, more informed stewardship of California’s iconic salmon population is now possible.