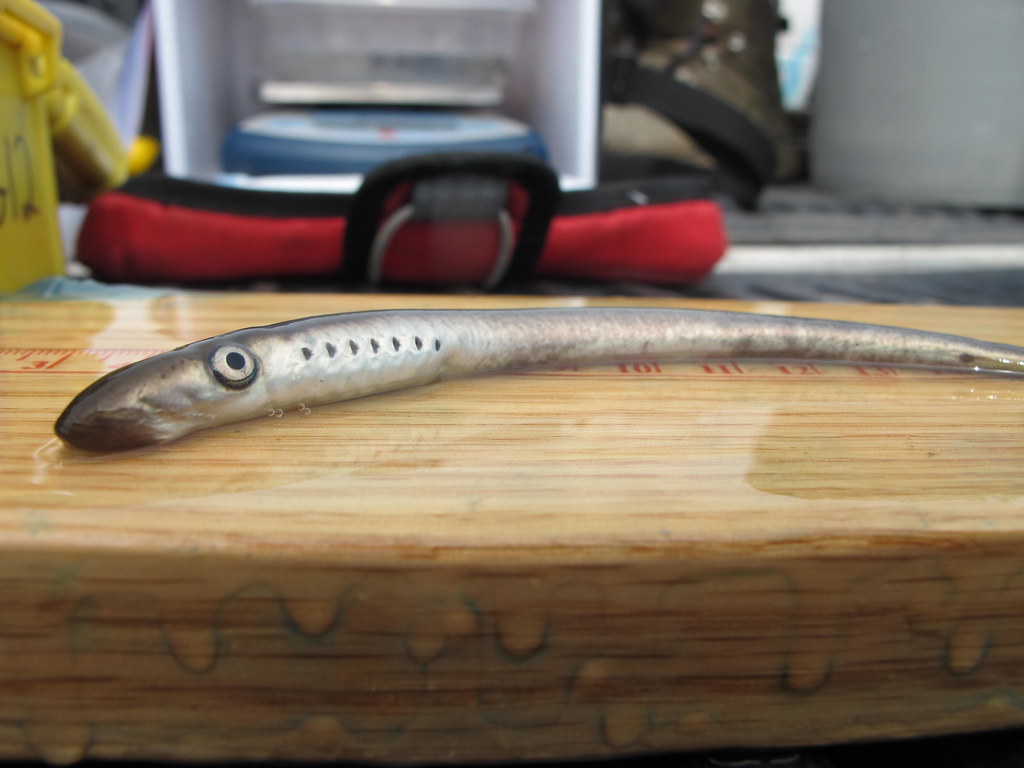 Lamprey may tread the line between ugly and downright frightening, but these underappreciated fish play similar ecological roles as the salmon that always seem to capture the freshwater fish spotlight. Just like salmon, the lamprey’s anadromous life cycle means that adults returning from the ocean to the streams where they were born bring important marine nutrients to fuel the freshwater food web. And unlike salmon, their young larva (called ammocoetes) are also important detritivores, sucking up debris in the sediment like so many millions of riverine Roombas. In spite of their stellar ecological credentials, these slimy sub-fish are poorly understood compared to other species. Gathering knowledge of where they are found and the conditions they need to survive is of paramount importance for conserving lamprey in the face of climate change, which has already begun to raise sea levels and regional temperatures and alter river flow patterns. Populations near the edge of their natural range, such as those of the various lamprey species in California, may be particularly at risk. Much of what is known about lamprey comes from projects that observe them as unintended by-catch while conducting surveys for different species. By leveraging this limited data, researchers were recently able to construct a model to evaluate which habitats are home to juvenile lamprey (Goertler et al. 2019). Their findings indicated that juveniles may be rearing at cooler temperatures, and this preliminary understanding is an important first step toward lamprey conservation.

California is home to three distinct lamprey species – Pacific lamprey (Entosphenus tridentatus), western river lamprey (Lampetra ayresii), and western brook lamprey (Lampetra richardsoni). Of the three, only the Pacific and western river lampreys are anadromous, whereas the western brook lamprey is a permanent resident of freshwater streams. Living at the southernmost extent of their natural range in the Golden State, these three species inhabit watersheds that have been altered, degraded, and polluted over many generations, which may be driving declines in lamprey populations in other systems, but such data is lacking from the Sacramento-San Joaquin watershed. The lamprey larval form is generally thought to remain in freshwater for its entire rearing period, which may last an astonishing seven years. However, young lamprey detected in surveys further downstream suggest that they may also rear in estuaries. By describing the habitat use of juvenile lamprey in the San Francisco Estuary, this study aimed to identify factors that may make it more challenging for these juveniles to rear in estuaries in the future.

Lamprey are often encountered in the lower, undammed reaches of the Sacramento and San Joaquin rivers during fisheries studies focusing on salmonids or smelt species. However, the extent to which lamprey use estuary habitats is unknown. Using by-catch data from multiple natural resource agencies, the authors of this study created a model to identify factors associated with locations where lamprey were found. In particular, juvenile lamprey more commonly occupied habitats in both the lower Sacramento River and at the confluence with the San Joaquin River, and were often found at cooler water temperatures. The surveys used by this study encountered relatively few lamprey, but this was unsurprising as none of the sampling gears used were meant to target lamprey.

Although the data used in this study were too limited to determine the specific habitat characteristics that may be beneficial for the heat-sensitive juvenile lamprey, it does provide a baseline understanding of where these juveniles occur, which future studies could build on. Current efforts in the San Francisco Estuary are seeking to restore over 3,000 hectares (or about 5,600 football fields) of freshwater tidal marshes. This restored habitat could be designed to provide refuge from rising temperatures for numerous species if the needs of those individual species are known. Despite their relative neglect by science, lamprey play critically important roles as predators, prey, bottom-cleaning detritivores, and links between sea and stream. The authors of this study recommend that the fisheries community work to better document lamprey abundance and distribution, and that future studies focus on gathering data to aid their conservation. Although somewhat less than charismatic, lamprey are nonetheless a vital component in the aquatic ecosystems that they inhabit.