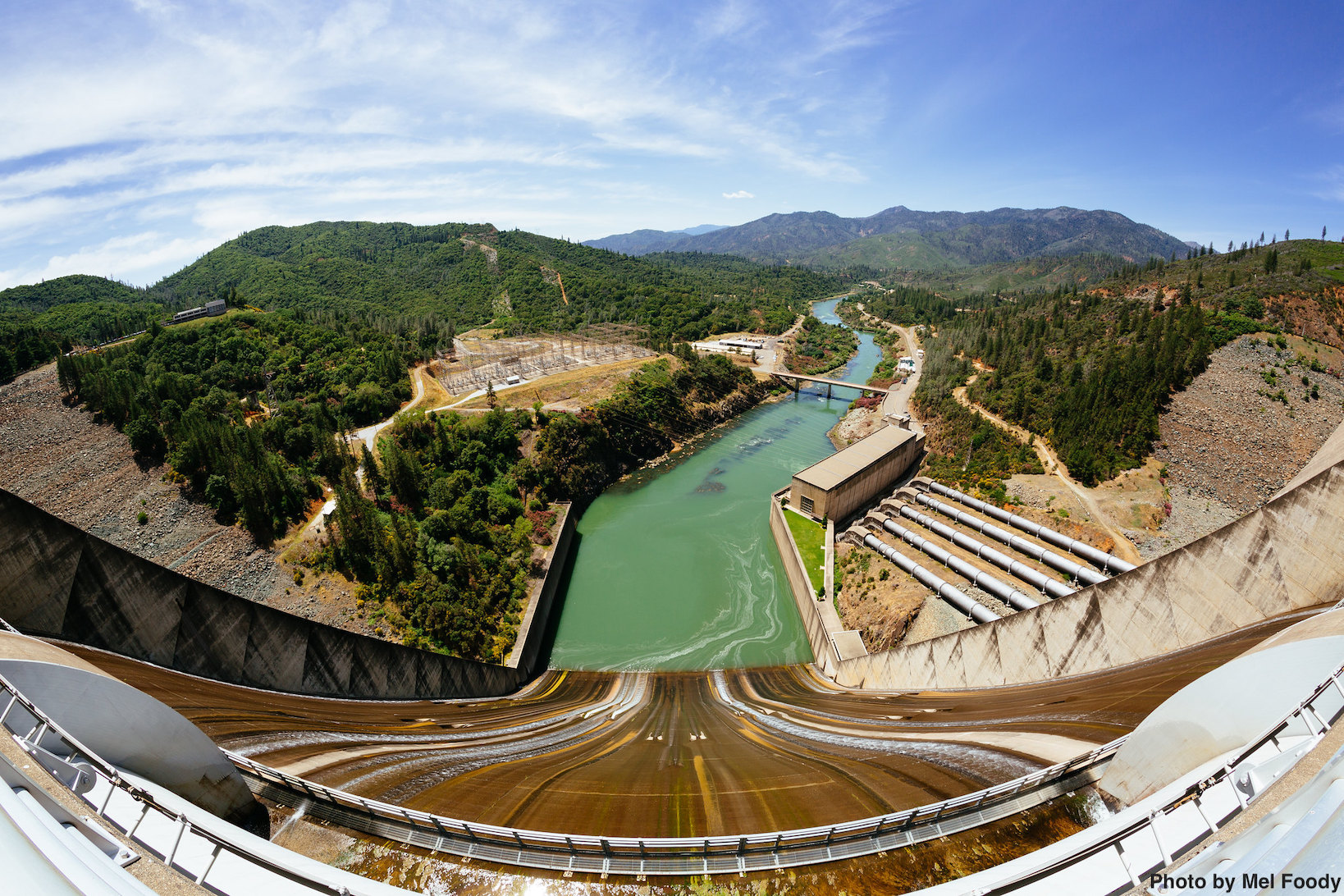 The historic Sacramento River once flowed unobstructed from rocky Sierra Nevada headwaters to expansive Delta wetlands, providing a diversity of interconnected aquatic habitats. Fish species evolved to take advantage of this diversity, with some migrating long distances to mountainous cold-water streams and others sticking to warmer downstream reaches. But once the continuous stream network was fragmented by dams, species like winter-run Chinook salmon (Oncorhynchus tshawytshaw) were blocked from their cold-water spawning streams, and warm-water species like the green sturgeon (Acipenser medirostris) experienced lower temperatures at their downstream spawning sites due to the release of cold water from reservoirs. Today, these two species are listed as endangered and threatened by the Endangered Species Act (ESA), respectively. River flow targets are set in an effort to conserve these species, which can be achieved by releasing water from upstream reservoirs. But how does one achieve temperature and flow targets for listed species with such different requirements, while also meeting the needs of human water users? A recent study sought to achieve an equitable solution by using a multi-objective approach to identify trade-offs and model an optimal dam release scenario to meet the needs of salmon, sturgeon, and humans (Zarri et al. 2019). While highlighting the difficulty in managing flows to meet a variety of objectives, the study presents an approach that can be used in other rivers to achieve diverse (and often competing) management goals.

Because the Shasta and Keswick dams block winter-run Chinook salmon from reaching their historic spawning sites in upstream tributaries, they must complete their life cycles in the warmer mainstem of the Sacramento River. Ironically, the very dams that obstruct their way are the mechanism that makes this possible. A temperature control device (TCD) allows water to be selectively withdrawn from the cold bottom or warmer surface of the reservoir to adjust water temperatures below the dam to a suitable level for winter-run eggs to survive. A significant amount of research has helped dial in these releases (and conserve cold-water) to achieve the best conditions for spawning and incubation of winter-run Chinook, but these salmon-calibrated flows also reduce the temperature in the downstream reaches of the river, which could negatively impact species like green sturgeon. Using data on green sturgeon and winter-run Chinook from 2012 to 2016, the researchers sought to address three main questions: 1) Do temperature targets for winter-run egg survival create poor conditions for larval green sturgeon?; 2) Can a water release strategy optimize conditions for winter-run, green sturgeon, and human water users?; and 3) How often would this theoretical optimal strategy be possible given California’s highly variable precipitation?

The cold water released through Keswick Dam warms up as it flows downstream, increasing in temperature by 2.20˚C (~4˚F) by the time it reaches green sturgeon spawning locations. This gradual warming, along with the fact that green sturgeon spawn earlier in the year than winter-run Chinook salmon, means that temperatures may be carefully altered so both species experience suitable temperatures during spawning. The model created for this study suggests that using the TCD to release warmer water earlier in the season may benefit green sturgeon, while at the same time preserving colder water for later release to benefit winter-run Chinook. Although there is a potential conflict between downstream water users requiring high discharge and larval sturgeon requiring lower discharge and warmer temperatures as they grow, peak agricultural demand occurs in June and July, while larval sturgeon are mostly present in May. Overall, the authors found that dam releases could be optimized during the summer for both fish species (while still meeting water user needs) at a discharge of 5,300 cfs and a temperature of 11.5°C from Keswick. The model suggested that optimal discharge and temperatures would have been achievable 69% of the time between 2000 and 2015. Under this model, appropriate temperatures for winter-run Chinook were possible in 75% of years, temperatures suitable for larval sturgeon were possible in 56% of years, and flows appropriate for both water users and larval sturgeon were possible in 94% of years. Providing suitable flows and temperatures will likely become increasingly difficult as climate change threatens to alter rainfall and temperature patterns. Other challenges remain as well, as potentially significant factors like predation and food availability are not considered in this approach. However, dams afford managers the unique ability to adjust the river environment, and optimization models like this one provide a useful tool to evaluate trade-offs in managing imperiled species while also meeting human needs.