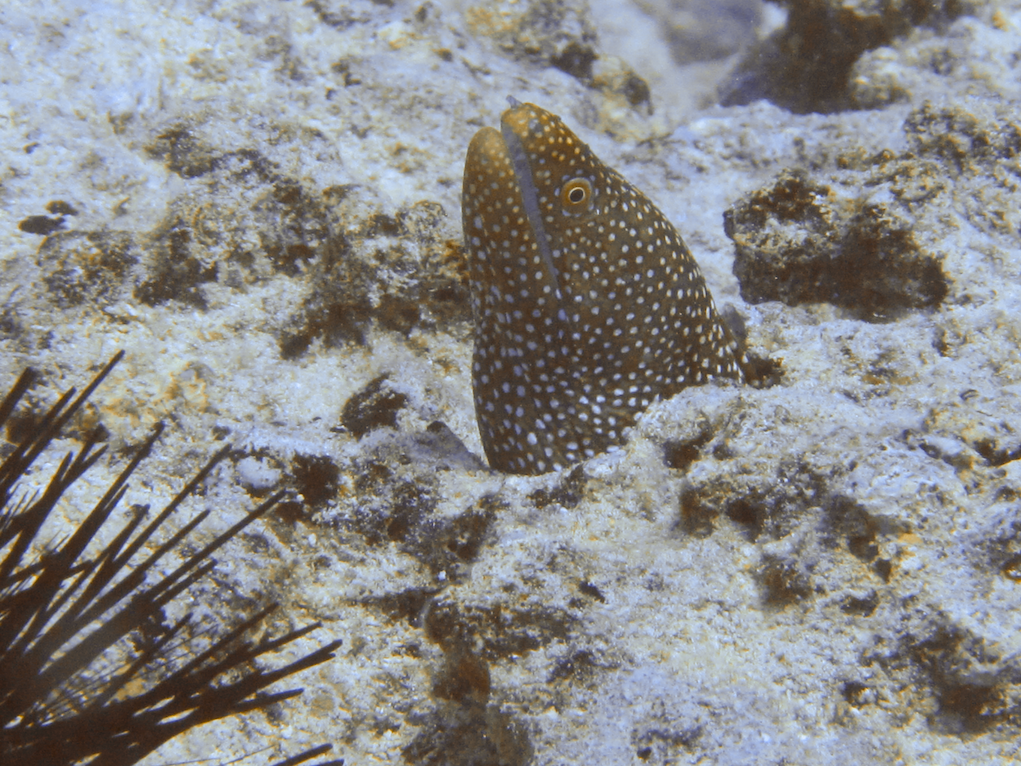 Our staff tends to have one thing in common: we love the water, whether it be fresh, salty, or carbonated. As a result, we often tend to find ourselves around water, even when on vacation. While some of our staff were recently diving, they were able to snap a picture of this beautiful whitemouth moray eel (Gymnothorax meleagris). There are more than 200 types of moray eel, some growing only a few inches and others growing over 3 meters long. The whitemouth moray eel lives all over the Indo-Pacific Ocean, but can only be commonly found in Hawaii. These fish have poor eyesight and rely on their sense of smell to lead them to the small fish or crustaceans on which they prey.

Moray eels carry a reputation as a vicious encounter in the deep blue, but in reality, most eels hide or flee from people. Much of the time, you can just see their heads poking out of the rocks, like our friend here. Though they’re not threatening, you would still be wise to keep a safe distance from an eel. Moray eels tend to have a strong bite, with their jaws locking in place – but it’s their second bite that is a bit of a surprise. The moray eel has a set of pharyngeal jaws, which means they have a second set of jaws located inside their mouths. After they clamp down on their prey, this second pair of jaws extends forward to bite off chunks of food. If you are having trouble visualizing it, think of the big black creatures from the movie Alien – luckily, eel pharyngeal jaws don’t extend past their mouths. This second set of jaws is responsible for tearing off swallowable pieces of prey, a needed adaptation because eels, unlike other fish, lack the ability to swallow by creating negative pressure in their throat. This incredible evolutionary trait made for a splashy scientific discovery a few years ago, and is just one of the many reasons to admire these unusual animals.