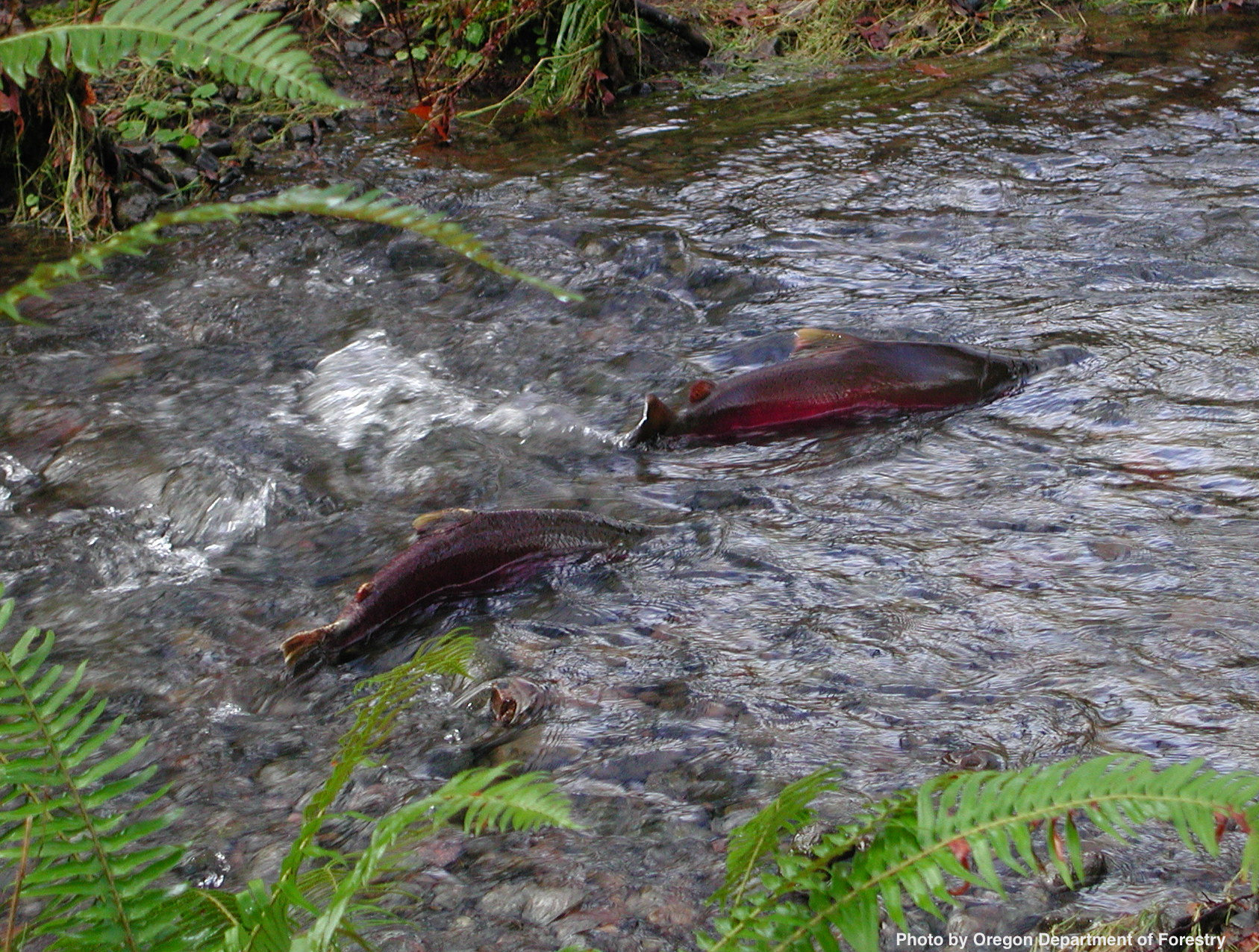 Watersheds that support salmon benefit from an annual influx of nutrients delivered by this migrating fishy convoy. When salmon return to their natal streams to spawn and die, the nutrients in their bodies obtained from the ocean provide an important source of nitrogen and phosphorous to watersheds that are often nutrient-poor otherwise, supporting the health of the surrounding forest. This increase in plant productivity has effects that cascade up the food web, including increases in herbivorous insects, which benefit from elevated nitrogen in leaves. In fact, both terrestrial and aquatic insects have been shown to be more abundant in watersheds where salmon are present. Animals like bears, wolves, and gulls also arrive en masse to get in on the feast, but the benefits don’t stop there. A healthy forest teeming with delicious bugs is also a very appealing habitat for a colorful cast of songbirds. Responding to the structure and composition of the forest and the increased availability of food, songbirds quite literally flock to salmon watersheds. Studies have demonstrated that bird diversity and density are higher in environments where salmon spawn, but these investigations have been relatively coarse, only comparing bird communities in streams with and without salmon. To develop a better understanding of the relationship between salmon biomass and songbird communities, researchers carried out an investigation of the avian communities in streams with a wide range of salmon abundances, revealing just how important fish are to their feathered friends (Wagner and Reynolds 2019).

Streams in the Heiltsuk First Nation Territory on the Central Coast of British Columbia are accessible only by boat, and thus are largely undisturbed by human activity. Many of these waterways provide ideal habitat for spawning pink (Oncorhynchus gorbuscha) and chum (O. keta) salmon. To investigate a range of salmon densities, scientists selected streams with fall spawning counts ranging from zero to more than 120,000 fish Over the course of two years, the researchers conducted point counts near the mouth of each river between May and July, recording all the birds that were seen or heard. The data revealed that streams with higher salmon biomass had higher abundances of all bird species. Bird species richness also increased with salmon biomass, and even streams with low levels of salmon spawning had larger bird populations than those without. It’s important to note that many of the songbird species detected in these watersheds are migratory, meaning they are not present when salmon are spawning in the fall. Instead, they arrive the following spring to reap the benefits of the salmon’s seasonal legacy.

Though they reside high in the treetops far from the aquatic realm of fish, songbirds appear to profit from the marine resources that salmon bring to their forest home. However, the current approach to salmon management focuses on maintaining stocks to ensure the recruitment of the next generation, which neglects the importance of the landscape-scale processes that support healthy ecosystems. These interactions between habitats and organisms have existed for millennia, and the declining abundance of salmon in many systems is likely to send shockwaves through the entire ecosystem. Maintaining functioning ecosystems may require a more holistic approach that considers the importance of salmon as a resource for humans and other animals alike.