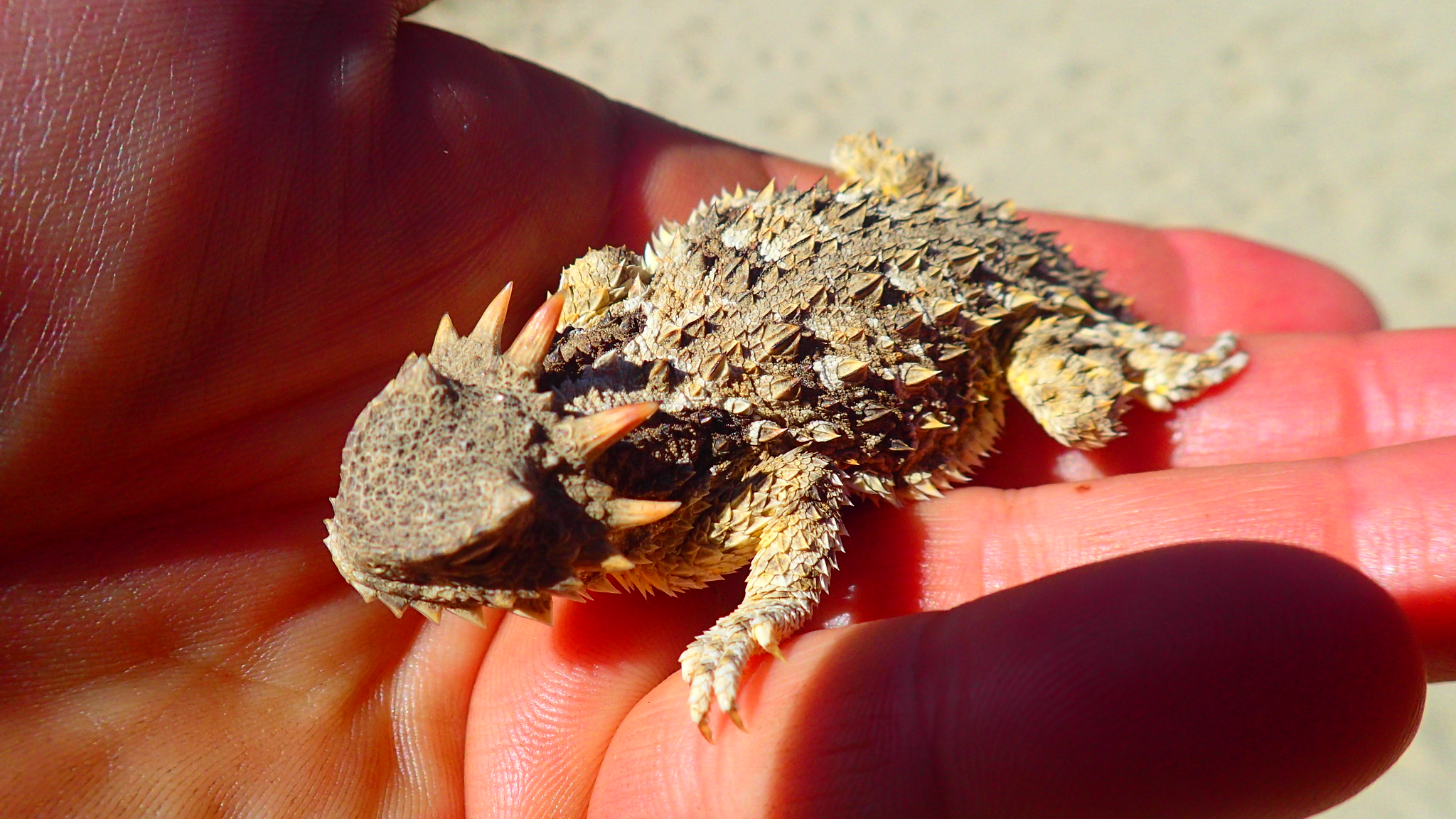 With a crown of horns and ability to shoot blood from its eyes, the horned lizard is built for defense. The 16 living species in the genus Phrynosoma that make up the horned lizards  differ based on color, size, and the arrangement of horns. Often called horny toads due to their wide, flat body shape, these lizards enjoy the hot weather, and have many skills to stay alive in their sometimes harsh habitat. Horned lizards feel most at home in hot, dry places like deserts or certain woodlands. Their durable thick skin can handle the heat and also provides protection from predators. In order to keep up water intake, the lizards harvest rain by lifting up their tails to direct water down their backs and towards their heads. Channels in horned lizard skin direct and accelerate the movement of water towards their heads, like a funnel. From there, they open and close their jaws to pump water into their mouths. Under a microscope, their skin shows a range of wider and narrower points of diameter that make this rain harvest possible. 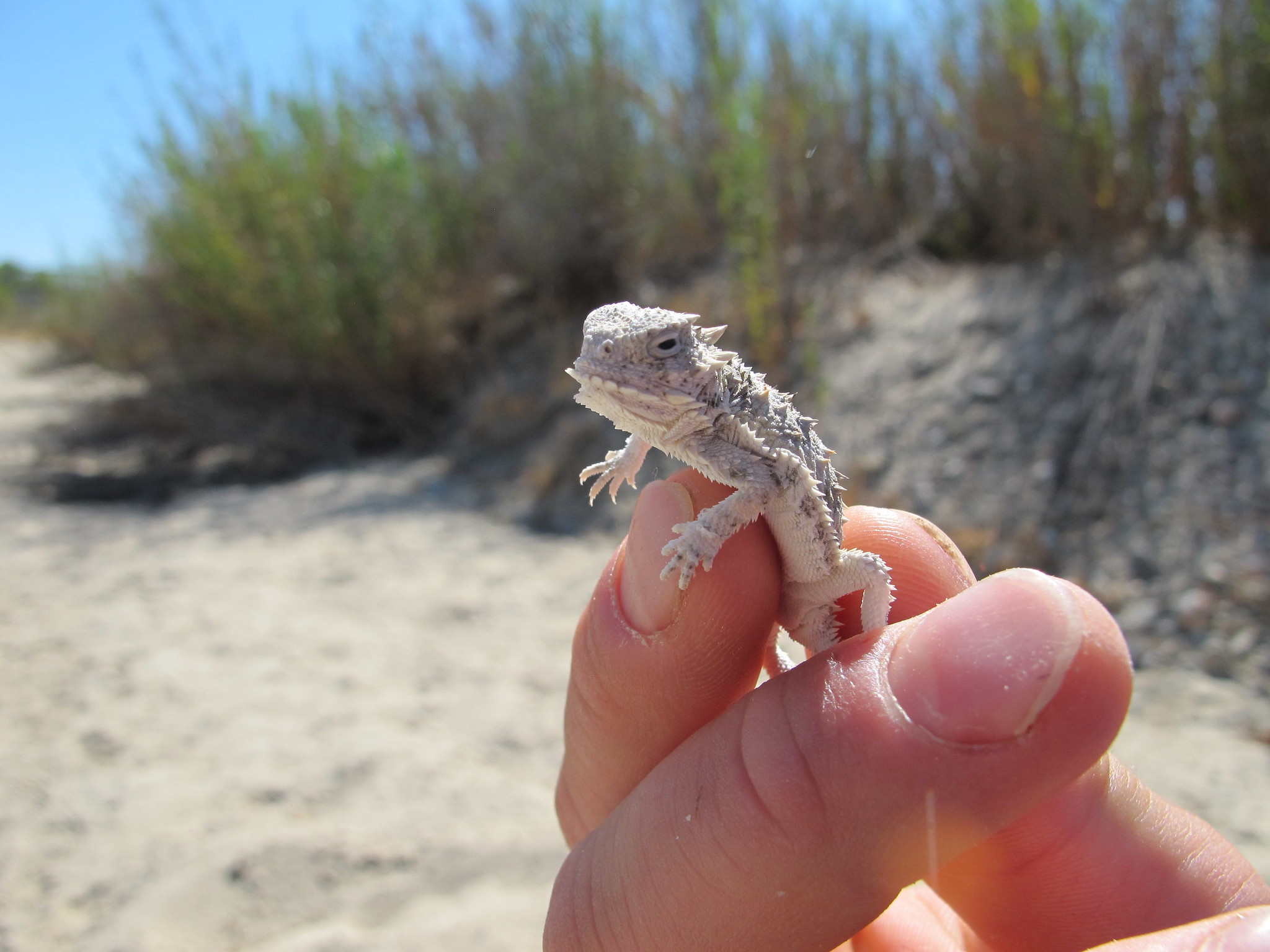 Rattlesnakes, coyotes, birds, dogs, and cats are some of the many predators  that feed on horned lizards. Luckily, the lizards are always ready to strike back with some creative defenses. Horned lizards choose camouflage if they know they can’t outrun a predator. Their skin color blends in effortlessly with rocks and desert sand. When a predator is closing in, horned lizards can expand their bodies to over twice their normal size. Looking bigger is always a good way to intimidate other animals in the wild, especially when horns are involved! Sometimes they even roll over and “play dead”. But the most shocking defense technique of horned lizards is their ability to squirt blood from their eyes like laser beams. They can even take aim using muscles in the corners of their eyes. This survival tactic works best when the lizard is already inside a predator’s mouth, or at least if its head is! Their blood contains formic acid that is particularly harmful to members of the dog family, and causes an unfavorable reaction that discourages further munching. Horned lizards acquire this chemical in their blood from their diet, specifically from venomous harvester ants. The lizards aren’t affected by the venom because they wrap the ants in mucus before swallowing. The mucus blocks the ants from being able to sting, so the lizard is safe with a full stomach and can extract the venom for a blood squirting counterattack.

Given all of these defenses, messing with a horned lizard doesn’t seem worth it.  However, as feisty as they seem, horned lizards are still affected  by landscape disturbances and development, as humans continue to build further onto desert habitats. Some people enjoy keeping horned lizards as pets, but as these lizards do not fare well in captivity, some states require permits for handling. These lizards play an  important role  by keeping ant populations in check, which benefits all animals that can be stung by venomous ants, including humans. Given their resourcefulness and bizarre adaptations, horned lizards can remain successful if we allow them to stay wild.

This story was written by Andrea Dempsey as part of an internship with FISHBIO.