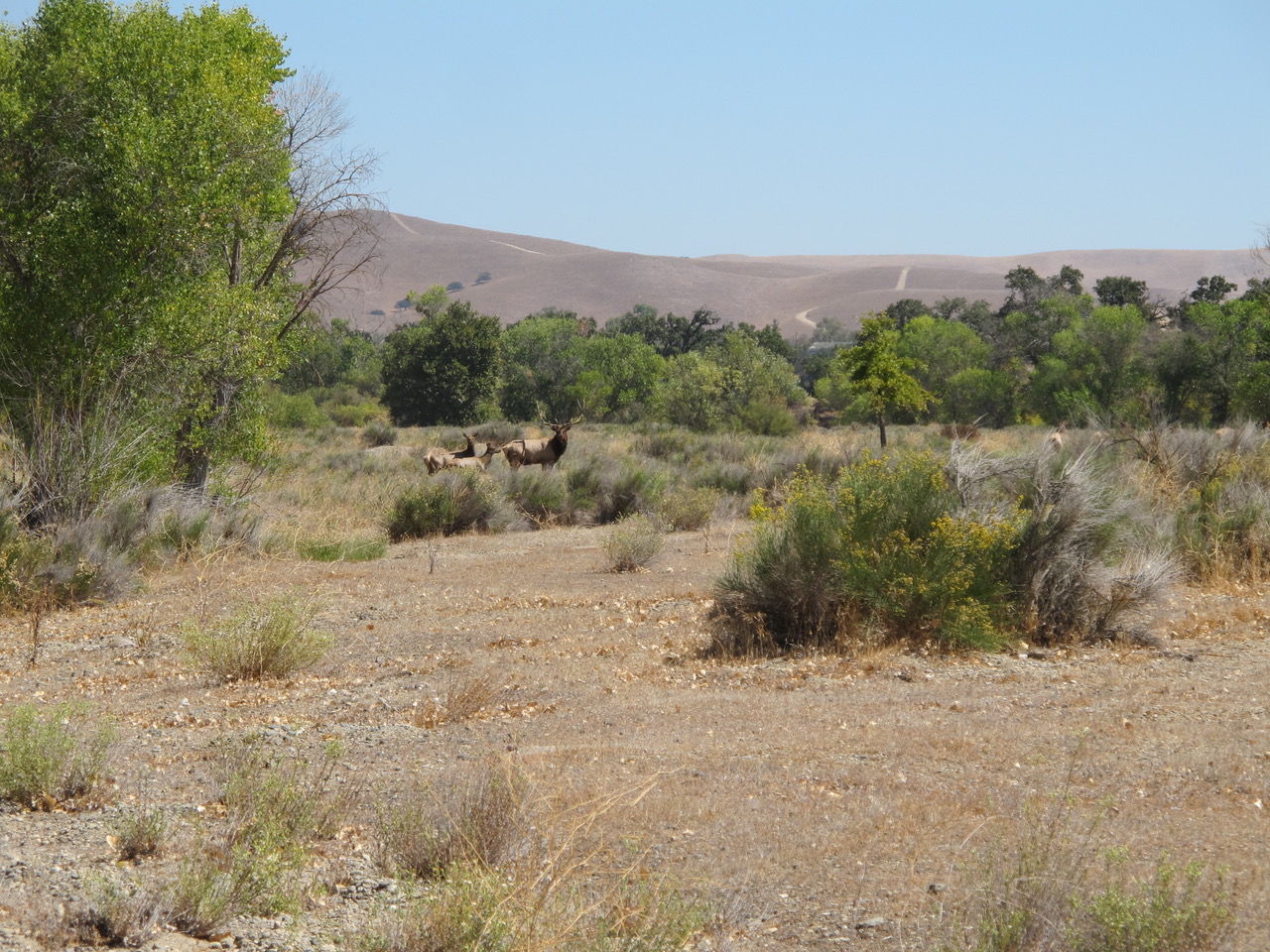 Conservation efforts helped bring California’s tule elk back from the brink of extinction, as we described in a previous blog post.  There are now an estimated 5,700 tule elk living in 22 herds across California (as of 2016), including ones near Bakersfield, Pacheco Pass, Point Reyes, Owens Valley, Tomales Point, Carrizo Plain, and Cache Creek. All of the current populations of tule elk are descendants of a few individuals saved by cattle baron Henry Miller in the mid-1800s. Although today’s population is only about one percent of its historic abundance, it does mean the species is no longer facing an immediate risk of extinction. Some herds are confined within managed reserve areas, while others are free ranging. A herd typically consists of one to three smaller harems of 10–20 individuals, including a bull elk, several female cows, and their young calves. Since the herds can’t move freely through the state to interbreed with each other, wildlife managers still have to relocate and selectively breed tule elk to keep their genetic diversity healthy. A new Elk Management Plan for California includes connecting and increasing their habitat, but these types of conservation efforts can take many years and require the help of government agencies, land owners, and the public to achieve. 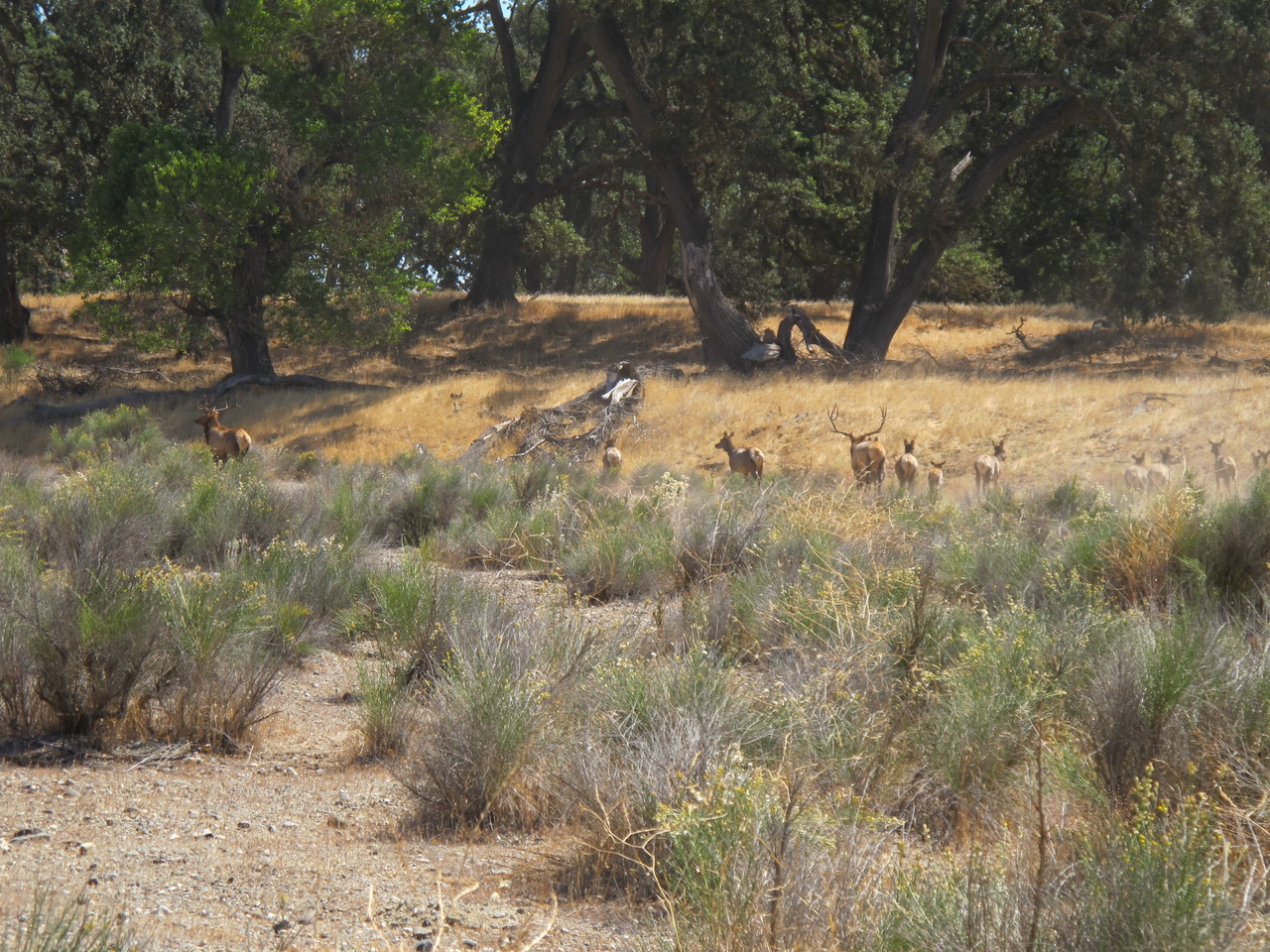 Where the elk have returned, their grazing maintains open grasslands and may even reduce the abundance of invasive plant species. They still face challenges, such as the spread of disease from domestic cattle, and an ongoing battle between cattle ranchers and elk conservationists at Point Reyes National Seashore highlights the difficulty that wildlife managers face trying to find solutions that suit the needs of both people and animals. Cattle ranchers played a hand in saving Point Reyes from commercial and industrial development and in the creation of the National Seashore, with the assurance that they would be able to continue grazing cattle on the land. However, as tule elk numbers increased, the animals began competing with the cattle for food. When the ranchers’ grazing lease was due for renewal, conservationists stepped in to try to win more protections for the elk, while the ranchers wanted to completely remove elk from the Seashore. A recent bill passed in the House of Representatives that would extend the cattle ranchers’ leases for another 20 years, but the elk can also stay, as long as they don’t “cause conflicts” with their agricultural neighbors.

Challenges remain such as ensuring enough grass for cattle and elk, and enough space for elk and people in California. The new bill, HR 6687, would allow Native Americans to hunt elk on the Point Reyes National Seashore, an idea that some people see as a threat to protected areas, but others see as a creative, multi-benefit solution. Sustainable tourism, or “ecotourism” is another solution that many countries are finding is a viable way to protect natural resources and provide opportunities for people. Three million people visit Point Reyes National Seashore every year, many hoping to see tule elk. Observing elk in their natural habitat may offer an opportunity to see a baby calf frolicking down a hillside or hear the bugling of a bull elk declaring its territory. The public can view wild or captive tule elk at several other sites throughout California and by doing so, their tourism dollars may help make the case to protect these iconic animals.